Marriage is alive, well among couples at Mass - Catholic Courier 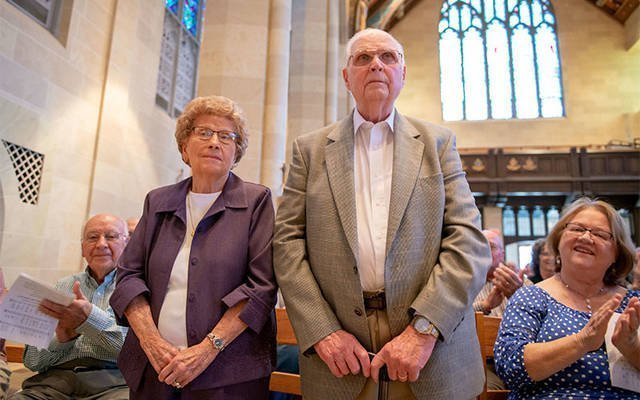 Anthony and Josephine Matroniano are recognized on their 71 years of marriage during the annual Wedding Jubilee Mass at Rochester's Sacred Heart Cathedral May 6. (Courier photo by Jeff Witherow)

There are some in society who believe marriage is an outdated, dying institution, but I doubt any of those naysayers were anywhere near Sacred Heart Cathedral on May 6. That day, more than 100 married couples gathered at the cathedral to renew their wedding vows during the Diocese of Rochester’s annual Marriage Jubilee Mass.

I talked with six of those couples after Mass, and although each conversation was very different, each was thoroughly enjoyable. One of those couples — Caitlin and Steve Mariconti — had been married for less than a decade, and it was easy for me to relate to the experiences they shared with me. Like my husband and me, Caitlin and Steve are celebrating nine years of marriage this year. Also like us, they’re in the trenches of parenting young children. Their three adorable boys — ages 1, 4 and 6 — were with them at the Mass and were able to witness their parents renewing their vows.

On the other end of the spectrum were Josephine and Anthony Matroniano, who have been married 71 years and had the distinction of being the longest-married couple present at the Mass. The hard work of parenting young children is in the rear-view mirror for Josephine and Anthony, who now are able to take great pride in rattling off the numbers of children (two), grandchildren (five) and great-grandchildren (two) they count among their loved ones.

My conversations with both couples were equally enjoyable, and I think that’s because of the love and joy evident in their marriages. Each of the two couples — and indeed, each couple I interviewed — had placed a high priority upon being present at the Mass and renewing their vows, which reflects the way each couple has prioritized their marriage and relationship. They are living proof that marriage is alive and well