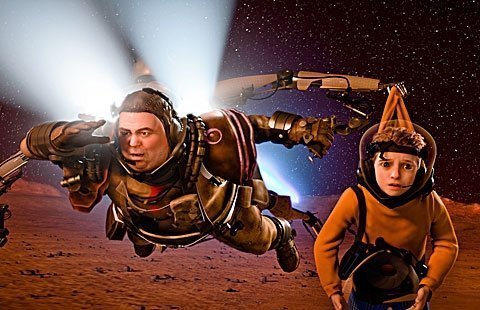 NEW YORK (CNS) — Vivid animation and a ringing endorsement of the traditional family combine to make the endearing adventure “Mars Needs Moms” (Disney) a film kids can enjoy and parents will appreciate.

But, though suitable for all (a few mild potty jokes aside), director and co-writer Simon Wells’ technically accomplished screen version of Berkeley Breathed’s children’s book sees its characters running a long gauntlet of dangers, and so may prove too scary for the most sensitive.

With its cartoon images based on the live-action motions of its cast — as we’re shown during the closing credits — this is the visually rich tale of Milo (Seth Green), a typical 9-year-old boy who is destined to have some very unusual experiences.

A fan of zombie movies, but not of broccoli or taking out the garbage, Milo has a run-in in the opening scenes with his loving but no-nonsense Mom (Joan Cusack) — Dad (Tom Everett Scott) is away on a business trip — and drives her to tears by hastily remarking that he’d be better off without her.

Milo’s ill-considered theory unexpectedly gets put to the test later that night when a crew of Martians arrives and kidnaps Mom. Stowing away on their rocker, Milo too is transported to the Red Planet.

Once there, Milo learns that the aliens — led by Mindy Sterling as a prune-faced villainess called The Supervisor — have developed a procedure for extracting the nurturing qualities of particularly effective human mothers and transplanting them into the otherwise clueless nanny-bots who have charge of their own young. He also discovers that the process, if completed, will cost Mom her life.

Milo’s rescue efforts are aided by Gribble (Dan Fogler), a goofy but good-hearted human fugitive who first came to Mars when his mom was abducted for the same purpose, and by Ki (Elisabeth Harnois), a free-spirited Martian rebel whose protests against the system take the form of bright psychedelic graffiti.

As our heroes fight the emotionless, authoritarian matriarchy that now prevails on Mars — boy babies are sent to a male underworld at birth and even the girls who remain above are raised entirely by the robots and have no ties to either of their parents — the trio uncovers evidence that affectionate nuclear families like Milo’s were once the norm there.

Wells’ script — penned in collaboration with wife Wendy Wells — clearly affirms that this older model of society is a far preferable one, based as it is on what Milo calls “the love thing.” And, inevitably, the crusade to save Mom merges with the struggle to restore Martian familial bonds.

Bolstered by this welcome celebration of venerable values, and free of any genuinely objectionable material, “Mars Needs Moms” can be warmly recommended for all but easily frightened small fry. For them, the 3D-enhanced sight of Milo dangling off a cliff or, in a later scene, gasping for air when accidentally exposed to the hostile atmosphere on Mars might be much too intense.