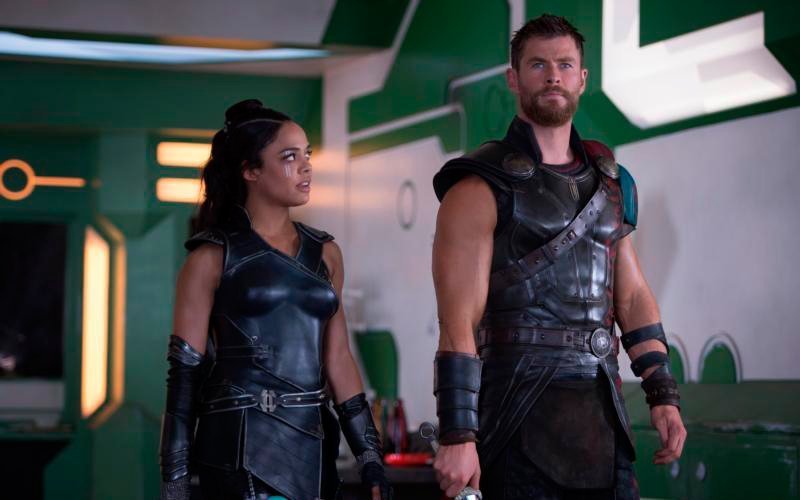 Tessa Thompson and Chris Hemsworth star in a scene from the movie "Thor: Ragnarok." (CNS photo by Disney)

NEW YORK (CNS) — There’s plenty of combat but relatively little bloodletting in the sweeping Marvel Comics adaptation “Thor: Ragnarok” (Disney). So at least some parents may deem this second sequel to the 2011 original acceptable for older teens.

As for adult viewers, they will likely appreciate the healthy dose of humor that keeps the proceedings on the boil. Still, at two hours and 10 minutes, the film does register as a bit overlong.

The sibling rivalry that has long pitted Thor (Chris Hemsworth), the straight-shooting Norse god of thunder, against his ever-wily brother, Loki (Tom Hiddleston), takes on a new dimension with the emergence of their older sister, Hela (Cate Blanchett), the goddess of death. Released from a long captivity by the demise of their father, Odin (Anthony Hopkins), Hela aims to dominate the family’s home planet, Asgard.

Worryingly, Hela’s bid for power has the potential to unleash the cataclysm of the title, a prophesied apocalypse that would spell ultimate doom for Asgard. Accordingly, Thor and Loki will have to patch up their differences if they are to defeat Hela’s schemes.

Along with Loki’s shifting loyalties, Thor must also contend with Hela’s destruction of his trademark hammer and with being taken prisoner by Valkyrie (Tessa Thompson), an Asgardian warrior-turned-bounty-hunter. Embittered by her experiences on Asgard, heavy drinker Valkyrie thinks nothing of handing Thor over to the Grandmaster (Jeff Goldblum), the decadent impresario of a series of gladiatorial games.

The mythological elements blended into director Taika Waititi’s superhero adventure — which also features Mark Ruffalo as Bruce Banner, aka the Hulk — are not for impressionable kids. But grownups will find relatively little to object to along the path of this spiffy intergalactic quest.

There are also some serious themes underlying the flashy fun. Loki, for instance, remains a morally ambiguous figure, but one more given to mischief than outright evil.

In dealing with him, Thor gradually moves away from trying to win him over to the side of goodness and begins to settle for the potentially more effective strategy of accepting Loki as he is and making what use he can of his brother’s positive qualities.

Banner finds himself in a similarly ambivalent situation. Though he’s anxious to use his alter ego’s fighting prowess for the cause of right, he fears that spending too long in the guise of the Hulk may eventually leave him powerless to return to his human form.

Sakaar, the world over which the Grandmaster presides, is a giant garbage dump inhabited by a diversion-hungry populace whose taste for ritual fighting recalls that of the ancient Romans. Eccentric, effete and indifferent, Goldblum’s Grandmaster conjures up some of Rome’s less reputable emperors as well as the cruelly corrupt spectators of the tournaments from which the “Hunger Games” franchise took its title.

The film contains constant stylized violence with little gore, brief partial nudity, a couple of mild oaths and crude terms, occasional crass language, at least one sexual reference and mature wordplay. The Catholic News Service classification is A-III — adults. The Motion Picture Association of America rating is PG-13 — parents strongly cautioned. Some material may be inappropriate for children under 13.