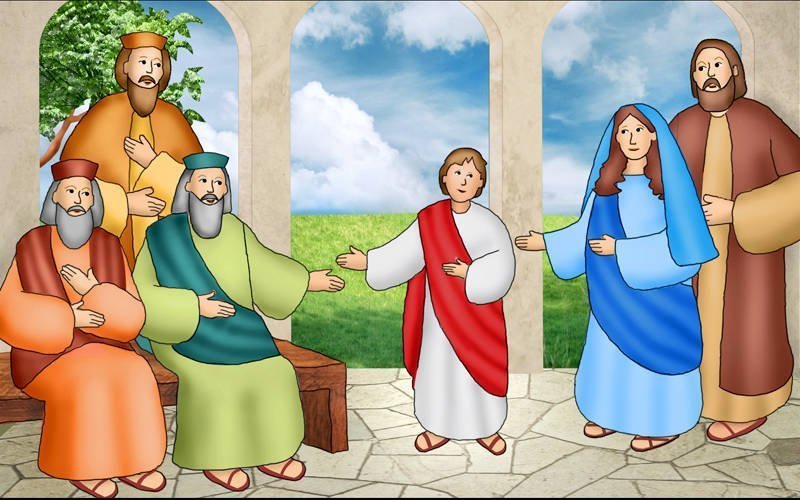 Even from a young age, people could tell that Jesus was special.

When Jesus was about a month old, his parents took him to Jerusalem to be presented at the Temple.

A man named Simeon was at the Temple at the same time as Mary, Joseph and Jesus. The Holy Spirit revealed to Simeon that Jesus was the Messiah.

“Now, Master, you may let your servant go in peace, according to your word, for my eyes have seen your salvation, which you prepared in sight of all the peoples, a light for revelation to the gentiles, and glory for your people Israel,” he said.

When Jesus was 12, he and his parents traveled to Jerusalem for the feast of Passover.

After the feast, Mary and Joseph joined the caravan of relatives and friends making the return trip to Nazareth. They assumed Jesus was somewhere in the caravan too.

Unbeknownst to them, Jesus had stayed behind in Jerusalem.

After a day’s travel, Mary and Joseph became concerned when they couldn’t find Jesus among their relatives and friends. They went back to Jerusalem to look for him.

After three days of searching, they finally found Jesus in the Temple. He was sitting in the midst of the teachers, listening to them and asking them questions, and all who heard him were astounded at his understanding and his answers.

“Son, why have you done this to us? Your father and I have been looking for you with great anxiety,” Mary said.

“Why were you looking for me? Did you not know that I must be in my Father’s house?” Jesus answered.

Jesus obediently returned to Nazareth with Mary and Joseph, and Mary kept all that had happened in her heart.

1. Where did Mary, Joseph and Jesus go for the Passover feast?

2. Where in Jerusalem did Mary and Joseph finally find Jesus?

ESSAY: Write about a time when you did something special or surprising at a young age.

There are many places in the Bible where we can read about people who did important things at young ages.

For example, in 1 Samuel 16, we read that God told the prophet Samuel to visit Jesse of Bethlehem to anoint one of his sons as Israel’s new king. Samuel thought God would choose Jesse’s eldest son, but he instead had Samuel anoint the youth David, who was Jesse’s youngest son.

In Genesis 41, we read about Joseph, the second youngest child of Jacob, whose brothers sold him into slavery in Egypt. God gave Joseph the ability to interpret dreams. After Joseph correctly interpreted Pharaoh’s dreams, Pharaoh was so impressed and grateful that he put the young Joseph in control of the entire country.

In the Book of Esther, we read about a young Jewish girl named Esther who became queen of Persia. She used her position and influence as queen to prevent her people from being destroyed.

And in Luke 1:26-38, we read about a youth named Mary, whom the angel Gabriel visited. Gabriel announced that Mary would become the mother of the Messiah, whom she was to name Jesus.

St. Margaret Clitherow was born in England in 1556. She married a Protestant man whose brother became a Catholic priest. At the time the Protestant faith was England’s official religion, and it was illegal to practice Catholicism.

Even so, Margaret also became a Catholic. She set up Mass centers in her home and at a local inn.

She was arrested several times for not attending Protestant services. When it was learned that she was secretly practicing Catholicism, she was sentenced to death for treason.

Using the hints provided, fill in the blanks in the sentences about the young people from the Bible Accent.