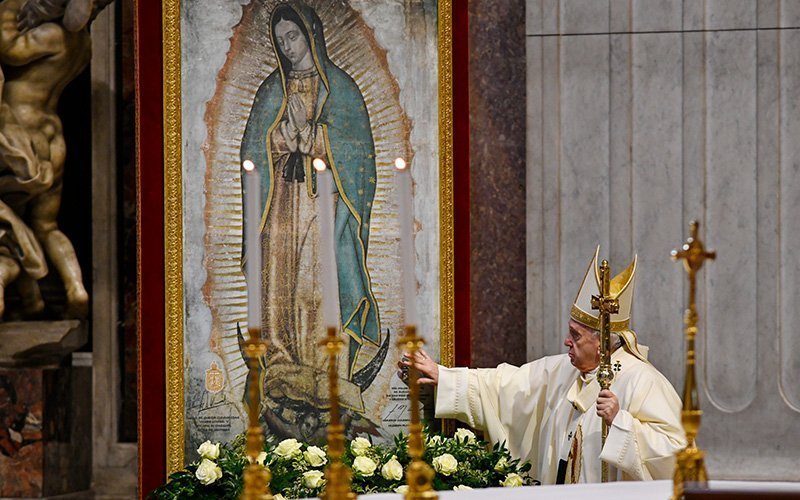 VATICAN CITY (CNS) — The humble image of Our Lady of Guadalupe is a reminder of the gift of God’s abundant blessings to all men and women, Pope Francis said.

By contemplating her, Christians can fully understand God’s gift “in the abundance of his son by nature and his mother by grace,” the pope said in his homily during a Mass in St. Peter’s Basilica Dec. 12, the feast of Our Lady of Guadalupe.

“This is the gift that God presents to us and has wanted to continuously highlight and reawaken throughout revelation,” he said.

Due to COVID-19 restrictions, the Mass was celebrated at the Altar of the Chair in the back of the basilica, with a limited group of faithful present.

At the start of the Mass, the pope — dressed in white, the symbol of purity — made his way to a replica of St. Juan Diego’s tilma, which bears the image of Mary, who appeared to the indigenous saint in 1531.

With a choir singing a Marian hymn accompanied by a guitar, the pope stood before the image, bowing reverently and incensing it three times.

In his homily, the pope reflected on the Gospel reading from St. Luke, which recalled Mary’s visit to her cousin Elizabeth.

The reading, as well as the image of Our Lady of Guadalupe, offer a reflection of three realities in the lives of Christians: abundance, blessing and gifts, he said.

Unlike human beings, who “by our very nature, by our limitations” always “need comfortable quotas,” he said, God “always offer himself in abundance” and “gives in abundance.”

“Thinking about the mystery of Christmas, the Advent liturgy takes much of this idea of abundance from the prophet Isaiah,” the pope said. “Generosity can be — I like to think of it as — at least one ‘limitation’ that God has: the impossibility of giving himself in any way that isn’t in abundance.”

Recalling Elizabeth proclaiming Mary as “blessed among all women,” the pope said that it reflects the reality of blessing. “God’s style is always to say ‘good,'” while the devil’s style is to curse others, be mean and be “unable to give oneself totally.”

“God always is to say what is good. And he says it with pleasure, he says it by giving himself,” he said. “He gives of himself in abundance by saying what is good, by blessing.”

Pope Francis said that the final reality — the “gift” — is reflected in the coming of Christ, who was “given to us in the one who is ‘full of grace.'”

By “contemplating the image of our mother today, we ‘steal’ from God a bit of this style that he has: generosity, abundance, blessing — never cursing — and transforming our life into a gift, a gift for all,” the pope said.

Tags: Feast Days & Saints, Pope Francis
Copyright © 2023 Catholic News Service, Inc. All rights reserved. Linking is encouraged, but republishing or redistributing, including by framing or similar means, without the publisher's prior written permission is prohibited.