Mary learns that she will be Jesus' mother - Catholic Courier 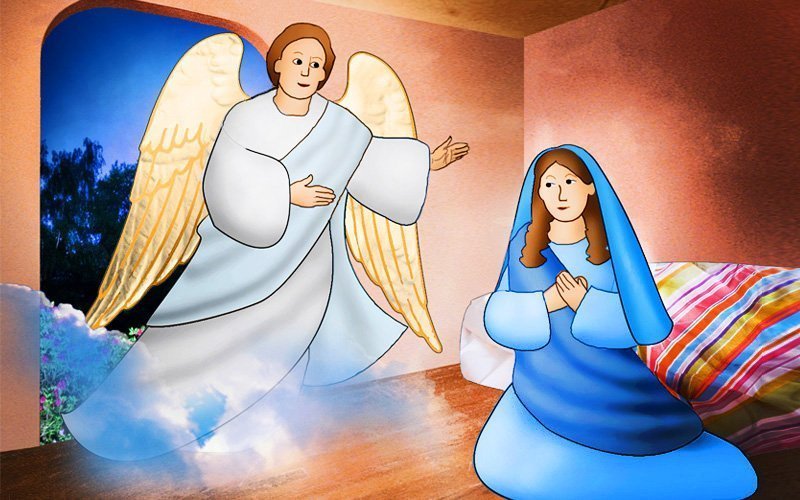 Mary learns that she will be Jesus’ mother

Mary learns that she will be Jesus’ mother

One day, God sent his angel, Gabriel, on a very important mission.

God asked Gabriel to deliver a message to a young woman, Mary, who lived in the town of Nazareth in Galilee.

Mary was a virgin who was betrothed to a man named Joseph, whose family was related to King David. “Betrothed” means that Mary and Joseph were married, but they were not yet living together as a married couple.

Gabriel came to Mary’s home. When he saw her, he called out to her.

“Hail, full of grace!” Gabriel said. “The Lord is with you.”

Mary was greatly troubled by his greeting and wondered what it meant.

Gabriel wanted to put her mind at ease.

“Do not be afraid, Mary, for you have found favor with God,” he assured her.

Gabriel went on to explain that God had chosen Mary to be the mother of the Messiah.

“Behold, you will conceive in your womb and bear a son, and you shall name him Jesus,” the angel told Mary. “He will be great and will be called Son of the Most High, and the Lord God will give him the throne of David his father, and he will rule over the house of Jacob forever, and of his kingdom there will be no end.”

As Mary was taking in all that the angel said, she asked how what he had told her would take place.

Gabriel said that the Holy Spirit would come upon Mary and she would be overshadowed by God’s power.

“Therefore the child to be born will be called holy, the Son of God,” he said.

After Gabriel had finished delivering his message about the Messiah, he had some more news to share with Mary.

Mary had a cousin named Elizabeth, who was married to the priest Zechariah. Elizabeth and Zechariah were old, and Elizabeth was never able to have children.

“And behold, Elizabeth, your relative, has also conceived a son in her old age, and this is the sixth month for her who was called barren; for nothing will be impossible for God,” Gabriel said.

Mary was overcome with emotion.

“Behold, I am the handmaid of the Lord,” Mary told Gabriel. “May it be done to me according to your word.”

1. Who was to deliver a message to Mary?

2. What was the message about?

When Mary received news from the angel Gabriel that she was to give birth to the Messiah, she also learned that her childless cousin, Elizabeth, was going to have a baby as well.

Several months before visiting Mary, Gabriel had visited Zechariah, Elizabeth’s husband, to tell him that he and his wife would have a child, who would be named John.

After Mary heard the news of her cousin’s pregnancy, she very quickly made the trip to the town in Judah in which Zechariah and Elizabeth lived. She wound up visiting with them for three months.

When Mary arrived at their house, she greeted Elizabeth.

Upon hearing Mary’s voice, the baby in Elizabeth’s womb leaped for joy.

Then Elizabeth was filled with the Holy Spirit.

“Most blessed are you among women, and blessed is the fruit of your womb,” she said to Mary in a loud voice. “And how does this happen to me, that the mother of my Lord should come to me? For at the moment the sound of your greeting reached my ears, the infant in my womb leaped for joy. Blessed are you who believed that what was spoken to you by the Lord would be fulfilled.”

St. Peter Canisius (1521-1597) was born in Holland. He studied canon law in Belgium and then went to Germany to study theology.

In 1543, he became a Jesuit and was well-known for his preaching abilities.

He attended two sessions of the Council of Trent. Afterward, he helped to revive Catholicism in Europe.

When he became the Jesuit provincial in southern Germany, Austria and Bohemia, he founded schools, colleges and seminaries. He also worked very hard to make sure the people of southern Germany remained Catholic. 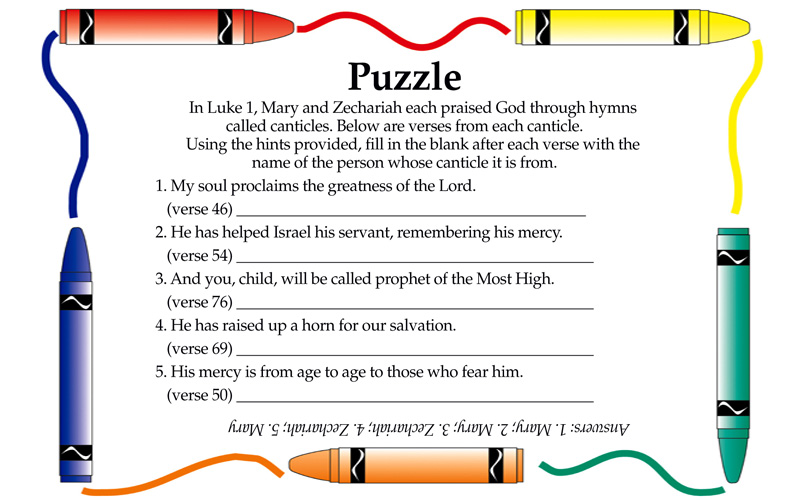 The essay question for December 2017 is: When have you received a surprise announcement, and how did you react?

All entries of 100 words or less must be received by the Catholic Courier no later than 4:30 p.m. on Dec. 20, 2017, to be considered for this contest. The winner, whose essay will be published in an upcoming print and online edition of Kids’ Chronicle, will be notified by phone.