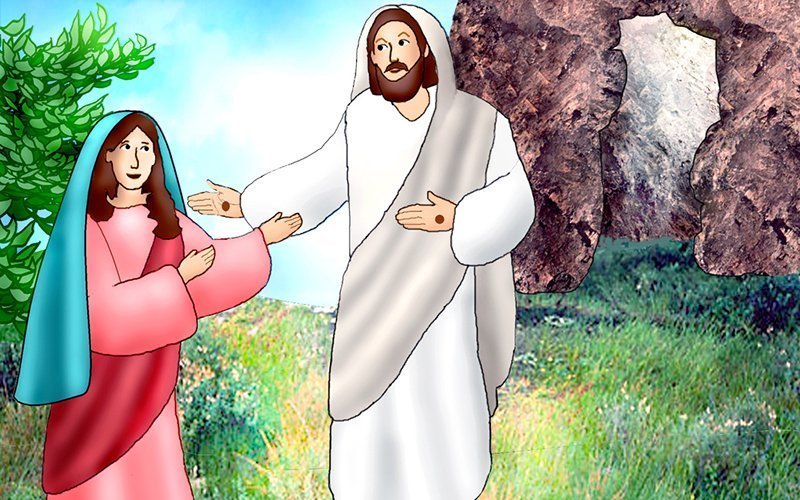 As Mary of Magdala walked slowly toward the tomb where Jesus had been buried, she thought about the events of the previous week. After being betrayed by Judas, Jesus had been arrested, convicted and sentenced to die on a cross. Now everything was over, everything had changed. Jesus was dead.

When Mary saw the entrance to the stone tomb, even though the sun had not yet started to light the sky, she did not see the large stone that had sealed it shut.

She ran forward and saw that not only had the stone been rolled aside, but the tomb was empty. Jesus’ body was not in it. Mary immediately ran back into town and woke up Peter and John. “They have taken the Lord from the tomb,” she told them, “and we don’t know where they put him.”

Peter and John went with Mary to the tomb. When it came into view, John ran ahead and saw discarded burial cloths in the tomb. He did not go inside. When Peter caught up with John, he went into the tomb. He found the cloth that had covered the face of Jesus rolled up into a ball on the ground. Peter and John returned to their homes. They did not yet realize that the Scripture that foretold the resurrection of Jesus had come true. Mary wanted to stay by the tomb a while longer to pray. And cry.

“Woman, why are you weeping?” Mary looked toward the voice that had spoken to her. She saw two angels dressed in white inside the tomb. “They have taken my Lord,” she answered, “and I don’t know where they laid him.” Turning, she saw a man, who was Jesus, but she did not recognize him.

“Woman,” Jesus asked, “why are you weeping? Whom are you looking for?” “Sir, if you carried him away, tell me where you laid him, and I will take him.” Then Jesus reached out his hand and said, “Mary!” Mary looked at the man again and said in Hebrew, “Rabbouni,” which means “Teacher.”

“Stop holding on to me,” Jesus said to her, “for I have not yet ascended to the Father. But go to my brothers and tell them, ‘I am going to my Father and your Father, to my God and to your God.’”

Mary ran and told the disciples, “I have seen the Lord.”

According to the Catechism of the Catholic Church, “The whole liturgical life of the Church revolves around the Eucharistic sacrifice and the sacraments.” The seven sacraments are holy signs of God’s grace.

Baptism, Eucharist and confirmation are the sacraments of initiation. Through baptism we become free from original sin, we enter into the Christian community by participating in the Eucharist during Mass and we are sealed by the Holy Spirit at our confirmation.

Reconciliation and the anointing of the sick are sacraments of healing. The sacraments of commitment are matrimony, where a man and a woman profess their love for each other, and holy orders, which is the beginning of ministry for bishops, priests and deacons.

The catechism tells us that our profession of faith and the celebration of the sacraments are the “bonds of unity.”

Although St. Fulbert (d. 1029) was born into an Italian family that was not rich or well-connected politically, he demonstrated a strong intellect and a desire to learn. When one of his teachers of math and philosophy became Pope Sylvester II, Fulbert became one of his advisers.

Fulbert was later appointed as the chancellor of Chartres in France. He also was put in charge of the cathedral schools in Chartres. His leadership transformed these schools into great educational centers.

When the bishop of Chartres died, Fulbert was appointed as his replacement. After the cathedral was destroyed by fire, Fulbert supervised the construction of another more beautiful structure. Contributions were sent from donors all over Europe who wanted to support Fulbert’s work and ministry. He was devoted to Mary, and when the cathedral opened, he celebrated the feast of her birthday there. We honor him on April 10.