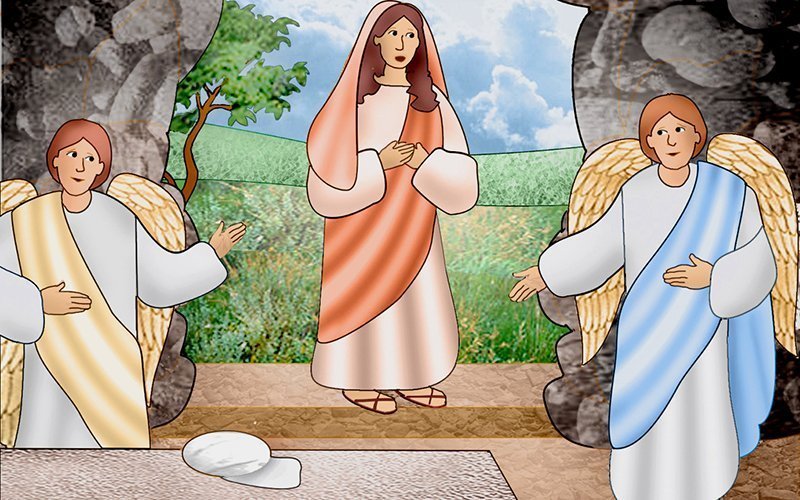 Mary of Magdala searches for Jesus

The sun had not yet risen in the east, but Mary of Magdala was awake. She had not been able to rest or sleep since Jesus had been crucified three days earlier. She had seen him after he had been beaten and then forced to carry his own cross up the hill to Calvary. That was where they killed him. Now here she was slowly walking toward the tomb where Jesus had been buried. She thought she had run out of tears, but still she cried.

When she finally reached the tomb, she discovered the heavy stone that had sealed the entrance had been rolled away. Mary carefully stepped into the cold, dark hole that had been carved out of the rock. Jesus was not there. Mary screamed. What had happened? Did the soldiers take his body away? Or grave robbers?

Mary ran as fast as her tired legs would carry her to the home of Simon Peter, where one of the other disciples was with him. Out of breath from running, and nearly hysterical, Mary told them, “They have taken the Lord from the tomb, and we don’t know they put him.”

Peter and the other disciple immediately ran to the site of the tomb. They found the tomb empty, as Mary had said. Inside the burial garments of Jesus were on the ground the cloth that had covered his head had been rolled up into a ball. The two disciples returned to their homes, not knowing what to do next.

Mary stayed behind. She was too upset to do anything but cry outside of the tomb. But something inside the tomb caught her attention. She looked in and saw two angels in white garments. One was at the head of the spot where Jesus had lain, the other was at the foot. They asked Mary, “Woman, why are you weeping?”

And Mary answered, “They have taken my Lord, and I don’t know where they laid him.” As soon as she said this a man appeared behind her. It was Jesus, but Mary did not recognize him. She thought he was the gardener. Jesus said to Mary, “Woman, why are you weeping? Whom are you looking for?”

“Sir, if you carried him away, tell me where you laid him, and I will take him.” Then Jesus said, “Mary,” and Mary recognized him.

READ MORE ABOUT IT:
John 20.
Q&A
1. Where was Mary going so early in the morning?
2. Who did Mary see inside the tomb?

The Bible is the sacred book of our faith. The four Gospels, which open the New Testament, are accounts of the life and teachings of Jesus. Two of our most important holidays honor two special moments of Jesus’ life. His birth, Christmas, and his resurrection, Easter. Christmas is a favorite holiday because of the way we celebrate the birth of Jesus, but Easter is more important because of what Jesus accomplished by rising from the dead. Because Jesus died on the cross and rose again, our sins were forgiven, and we are now able to receive the promise of eternal life with him in heaven. Have a reverent and holy Easter season.