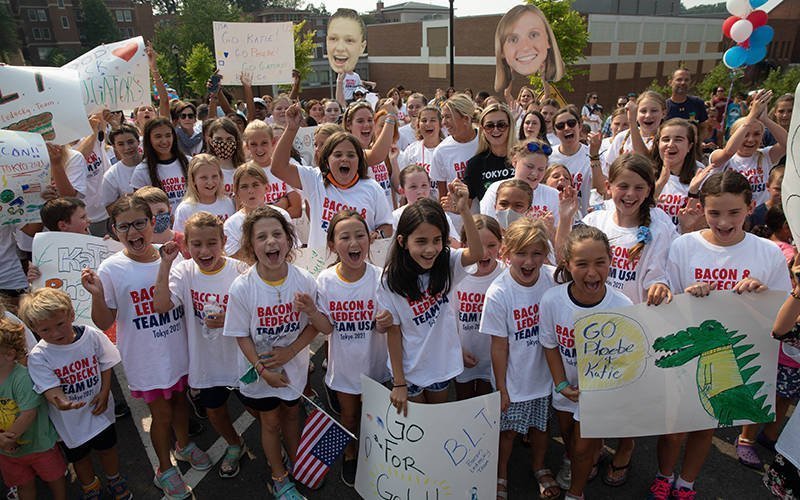 Students at Stone Ridge School of the Sacred Heart in Bethesda, Md., cheer on alumnae Katie Ledecky, of the class of 2015, and Phoebe Bacon, of the class of 2020, during an Olympics pep rally July 19, 2021. The two swimmers will compete in the Tokyo Olympics, which begin July 23. (CNS photo by Andrew Biraj/Catholic Standard)

BETHESDA, Md. (CNS) — For all the positive energy and enthusiasm at the Stone Ridge School of the Sacred Heart July 19, it wouldn’t be a surprise if Olympic-bound swimmers and alumnae, Katie Ledecky and Phoebe Bacon, could hear the exuberant cheers and applause all the way from Tokyo.

Hundreds of well-wishers gathered for a pep rally at the school’s Bethesda campus in suburban Washington.

Students of all grades, including members of the school’s Gator swim team, as well as faculty, staff, parents and alumnae — most wearing Katie Ledecky/Phoebe Bacon Team USA T-shirts — turned out in force to show love, support and pride for the hometown Olympians.

Ledecky is a 2015 graduate of Stone Ridge, and Bacon graduated from the all-girls Catholic school in 2020.

The outdoor rally was held just steps away from the building that houses the pool where Ledecky and Bacon spent countless hours in the water.

Students made posters, posed for photos with life-size cardboard cutouts of the Olympians and shouted a few of Stone Ridge’s rousing swim cheers. The girls loudly chanted, “G.A.T.O.R.S.!” “Go for Gold!” and “USA! USA!” with several holding signs that read, “Go Katie and Phoebe!” or “BLT” — short for Bacon Ledecky Team.

Among the nearly 300 excited supporters at the rally was Philippa Bacon, mom of 18-year-old Phoebe. She was grateful to see the amazing turnout and support for both swimmers.

Of Phoebe’s Olympics journey, she said, “It’s rather unbelievable. We are just amazed that she’s there. Every now and then, it just hits me. We are thrilled.”

Philippa Bacon said Ledecky, 24, “paved the way” for her daughter in the Washington area’s highly competitive sport of swimming, as well as Phoebe’s decision to attend Stone Ridge. Both girls also graduated from Little Flower School in Bethesda and swam year round for the Nation’s Capital Swim Club.

Unfortunately, no spectators, including family members were permitted to attend the Olympic Games in Tokyo due to COVID-19 safety precautions. Both the Bacon and Ledecky families attended the U.S. Swim Team Olympic Trials in June in Omaha, Nebraska, and cheered their daughters to Olympic-qualifying victories.

Eleanor Sun and Erin Gemmell, members of the Stone Ridge class of 2023, also competed in several swimming events at the U.S. Swim Team Olympic Trials. Although, they didn’t make Team USA this time, they attended the rally and are proud of their former teammate Phoebe.

“It was great to see how much she accomplished. I’m very excited to watch her events on TV,” Sun told the Catholic Standard, newspaper of the Archdiocese of Washington. She also said Ledecky continues to be a booster for her alma mater’s swim team, sending messages of support before and after important meets.

Sun recalled Ledecky attending a 2019 Stone Ridge meet while home during a college break. “It meant a lot to us,” she said.

Gemmell, whose dad, Bruce Gemmell, coached Ledecky several years at the Nation’s Capital Swim Club, said Ledecky is a role model for her.

“I always said, ‘I want to do what Katie does,’” said Gemmell, who hopes to qualify for the U.S. Swim Team at the next Olympic Trials in 2024, when the Games will be held in Paris.

Even the youngest members of the Stone Ridge school community couldn’t contain their excitement over their school’s now-famous Olympic teammates.

“I think they are amazing,” said rising third-grader Ariadne Nelson, adding she planned to be jumping up and down and cheering in front of her television while watching Bacon and Ledecky swim their races.

Boyle writes for the Catholic Standard, newspaper of the Archdiocese of Washington.