Mary's Place reaches out to refugees every day - Catholic Courier 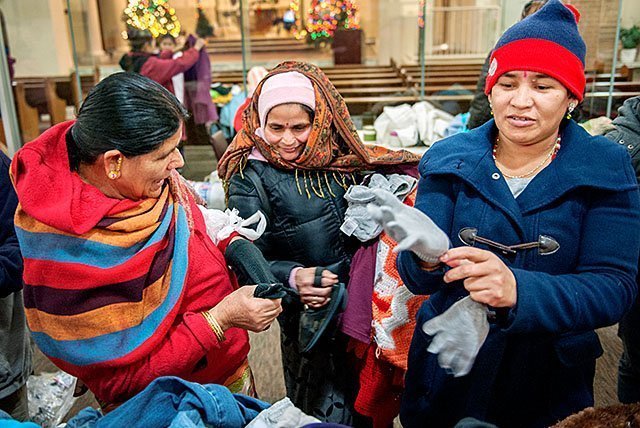 ROCHESTER — Hakizamana struggled to find words in English to convey what Mary’s Place means to her.

But her smile said it all.

The 30-year-old mother of eight has received food from Mary’s Place, as well as clothing and education for herself and her children, she said through Kathy LaBue, executive director of Mary’s Place, who acted as translator.

“She read today her whole sheet, all by herself,” said Hakizamana’s teacher, Judy Gagnon, a parishioner of the Cathedral Community, with her voice revealing a note of pride in her pupil.

Before coming to America, Hakizamana and her family — Mary’s Place staff have been unable to determine her last name — lived in a refugee camp in Tanzania. She is one of the hundreds of refugees who daily make their way to Mary’s Place, where they receive clothing, food and education in the form of tutoring in the English language, training in computer skills and other services.

In February of 2013, Mary’s Place moved into the former Holy Rosary Church from the Holy Rosary rectory, which was redeveloped as affordable housing by the diocesan affiliate Providence Housing Development Corp. At the time the former church also was renovated to make the nave suitable for the ministry. To partition the space without altering the building, clear glass dividing walls were put up, allowing for an unblocked view of the church’s stained glass and ornamentation.

The space includes an area for eating, a dry kitchen, a children’s play area and temporary walls that allow for easy reconfigurations. In the children’s area of Mary’s Place, the preschoolers made a train out of chairs and sat in it, smiling and waving to visitors. In partitioned classroom areas, volunteers with varied teaching backgrounds, including local education professors, helped refugees learn English and learn about living in American society.

Starting this month, Mary’s Place also will receive a five-year OACES (Office of Adult and Career Education Services Youth Development and Family Services) grant from the Rochester City School District to offer English classes for adult speakers of other languages.

In addition to education, their physical needs also are met. Each day, donated clothing piled high on tables and pieces of furniture are distributed to clients; on Tuesdays and Thursdays, Foodlink brings about 2,000 pounds of food that are given out to refugees. Anything left over after refugees have first pick is then offered to neighbors. The result is a constant rotating distribution that is intended to help people get the items they need.

“They come every day and almost every day everything is gone within 24 hours,” LaBue said.

At Christmas time, the distributions grew even more. In the former choir loft, hundreds of small grocery bags of donated socks, mittens and other clothing items were waiting to be given out.

At the holidays, Mary’s Place also received a $408 Hunger Relief grant from Catholic Charities, which includes proceeds from the annual Catholic Courier/Catholic Charities Christmas Appeal; LaBue said the money was used to buy food for its annual Thanksgiving basket distribution. The annual appeal raises money for the emergency funds of Catholic Charities offices and other affiliated agencies.

Needs are met through the generosity of the community, LaBue said. For example, a child recently asked for a bike and not long after someone donated a bike. In another instance, last year, a girl asked for an American Girl doll. Knowing the cost of such an item, LaBue tried to temper her expectations. But then she took a phone call from someone who was looking to donate an American Girl doll.

And there is Hakizamana’s family. Their Christmas also was provided for through another’s generosity, LaBue said.

“This year a couple who is able to do so, asked if they could help that family,” LaBue said.

The family received a kitchen table and enough chairs for all, a washer, dryer, a Christmas tree and Christmas gifts for each member of the family.

“They are going to be more comfortable than they ever have been,” LaBue said.

LaBue and other members of the Cathedral Community opened Mary’s Place in 2009 after LaBue saw refugees walking around the streets of Rochester in the middle of winter wrapped only in sheets and wearing flip flops.

“People will ask me what this is about,” LaBue said of starting the ministry. “It’s family. I’m the oldest of 9.”

Volunteers say they also have experienced the familial feeling at Mary’s Place.

“I like how homey Mary’s Place is,” said Assistant Director Cara Breslin, who started at Mary’s Place through Rochester Youth Year and Nazareth College. “It’s very small, which means we get to do things the way that works best for our refugees.”

Amanda Gilbert, who has been volunteering at Mary’s Place through Rochester Youth Year, an AmeriCorps *VISTA program, said she loves the mixture of different cultures that she finds at Mary’s Place.

“I like to get to know the Burmese and Nepali cultures,” she said. “It is like a family — very close knit.”

LaBue said she was guided in her quest to start Mary’s Place through the example of Colleen Knauf, who started the Pittsford-based refugee ministry Saints Place in 1998.

“She’s the one who directed me,” said LaBue, a former design engineer for a tool and die manufacturer. “She said we need it so badly in northwest Rochester.”

There was another influential woman in the founding of Mary’s Place, LaBue said — the woman who gave the ministry its name.

“I have absolute trust in the Blessed Mother,” LaBue said. “Mary’s Place is Mary’s place.”

Editor’s Note: To contribute to the Christmas Appeal, download and print the donation form to mail a donation.