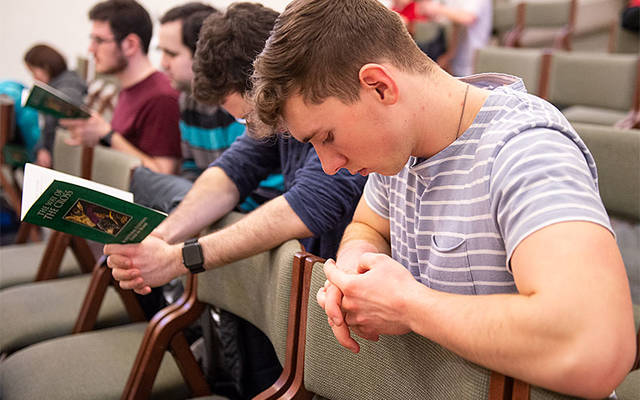 Jacob Chovanec, a student at Cornell University in Ithaca, takes part in a March 6 Stations of the Cross in the chapel of Anabel Taylor Hall, with Mass following at 5:15 p.m. (Courier photo by John Haeger)

ITHACA — On a late Friday afternoon in early March, as much of Cornell University readied to kick into weekend party mode, approximately 20 young adults gathered quietly in the chapel of Anabel Taylor Hall.

With many bowing their heads in solemn prayer, they took part in a 30-minute Stations of the Cross led by students. By the time the ensuing 5:15 p.m. Mass got underway, the congregation had grown to about 40 people.

Father Daniel McMullin, the liturgy’s celebrant, told the Catholic Courier that — prior to the coronavirus pandemic shutting down all Masses beginning later in March — weekday liturgies featured a steady student representation at Cornell and nearby Ithaca College.

“They’re pretty serious Catholics,” said Father McMullin, who serves as director of the Catholic communities at both Cornell and Ithaca. “They’re very committed.”

Father McMullin said that an average of 30 to 35 Cornell students per Mass have attended the Wednesday and Friday 5:15 liturgies at Anabel Taylor Hall this school year, compared to a combined total of 375 to 400 worshipers at the 10:30 a.m. and 9:30 p.m. Sunday Masses at Sage Chapel. And at Ithaca College, he said, 20 to 25 participants have taken part in the weekly 6 p.m. “fireside liturgy” at Muller Chapel on Thursdays, while the 7 p.m. Sunday Mass there has drawn about 70.

Cornell students Elise Viz and Jacob Chovanec, who both regularly attended weekday Mass, said their participation didn’t rise until after arriving on campus.

“It was something that surprised me,” said Viz, a sophomore mechanical engineering major from Chicago. “You’re going (to Sunday Mass) out of obligation and that’s fine, but then I started thinking, ‘Why not try to really get something out of it?’ Then it was like, ‘Wow, this is pretty great, why don’t I go more often?’”

As for Chovanec, his heightened commitment to Mass attendance stems from the example set by his peers.

“I personally never expected to want to go to Mass more than once a week until I got to college,” said Chovanec, a senior information science major from Mount Pleasant, Pa., near Pittsburgh. “I’d never felt the desire of possibly the calling to make it a bigger part of my life. But then I saw the great things that other Catholics my age were doing.”

Considering that they face the rigors of an Ivy League education and no longer have parents prodding them to attend church, it would be quite simple for students like Viz and Chovanec to skip Mass — either on Sundays or weekdays — if they so choose.

“But they don’t, happily,” remarked Father McMullin, a priest of the Diocese of Rochester who has served at Cornell and Ithaca since 2005.

In fact, despite the intensity of college life, Cornell’s Ricardo De Levante doesn’t view his weekday and Sunday Mass attendance as a sacrifice; rather, he considers all other activities secondary in importance.

“To me, it’s not about making the time for Mass — it’s about making time for the other things. If you don’t go to Mass, what’s the use of doing anything else?” stated De Levante, a native of Panama who is a graduate student in engineering physics.

Meanwhile, Joanna Sowa views her years at Cornell as an opportunity to take ownership of the Catholic faith in which she was raised.

“Coming into college, I knew I wanted to grow in my faith. Before, a lot of it was a family decision where we all had to go to church together. Here, I wanted to find my faith on my own, and coming to daily Mass is a part of that,” explained Sowa, a junior from Garfield, N.J., who is majoring in industrial and labor relations.

Sowa added that frequent Mass attendance provides her with respite from what she called “the craziness and busyness” of the rest of her week.

“Going to Mass always gives me a sense of peace and joy,” she said. “It’s just so incredible to come to Mass, spend time with God, and refocus.”

Viz, saying that Cornell is a place where “everybody’s schedule is right down to the minute,” echoed Sowa’s sentiment.

“I just feel that need for spiritual rejuvenation,” she remarked, adding that she also values her social bonds with like-minded people who are a part of Cornell Catholic Community.

“Here’s where I see my Catholic friends,” she said.

Tags: Tompkins County News
Copyright © 2023 Rochester Catholic Press Association, Inc. All rights reserved. Linking is encouraged, but republishing or redistributing, including by framing or similar means, without the publisher's prior written permission is prohibited.