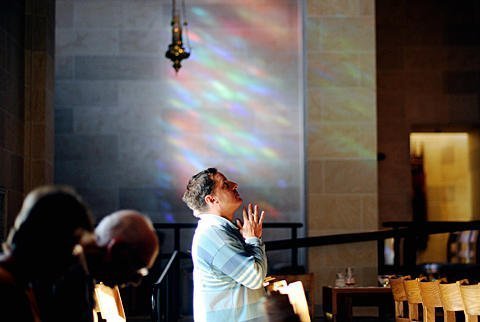 Gerald Scardino prays Sept. 11 during a special Mass at Sacred Heart Cathedral that was offered in remembrance of the events of Sept. 11, 2001. (Click here to view more photos from this event and/or buy prints.)

ROCHESTER — Upon seeing initial television coverage of the World Trade Center attacks on Sept. 11, 2001, John Appleby became so overwhelmed that he couldn’t continue his gym workout. But by the time he got to work that night, he was prepared to put his life on the line in order to provide disaster relief at Ground Zero.

Such is the resolve of a firefighter — and, according to Appleby, all his comrades at Genesee Street Engine 7 felt just the same.

“We all had packed a bag — every one of us,” recalled Appleby, a 26-year firefighting veteran who now serves as lieutenant with the Rochester Fire Department. “We were all saying, ‘We’ve got to down and help these guys, help pull people out of the rubble.’ Unfortunately, a lot of them didn’t make it.”

Though nobody from that unit ended up traveling to New York City, Appleby said their willingness to stand in harm’s way is a special quality shared by firefighters, police and ambulance workers, and other emergency personnel everywhere.

“These guys will run into a burning building, do anything they have to do,” he remarked.

Appleby and several of his cohorts, including Rochester Fire Department Chief John Caufield, were on hand for a commemorative Mass Sept. 11 at Sacred Heart Cathedral on the ninth anniversary of the terrorist attacks. The liturgy, which was celebrated by Bishop Matthew H. Clark, paid tribute to the approximately 3,000 people who were killed in New York, Washington, D.C., and Pennsylvania. This total included more than 400 emergency workers, mostly firefighters — “those who made the ultimate sacrifice for their neighbors,” as Bishop Clark put it.

Jim Reber, a firefighter with the Penfield Volunteer Fire Department, brought his children Chloe, 8, and Jack, 10. to the Mass. The St. Joseph Church parishioner said he made a point of attending in order to “try to be here for the guys who didn’t come back,” referring to the firefighters who perished at Ground Zero.

Bishop Clark began his homily on Sept. 11 by asking where everybody had been when they first heard the news of the Sept. 11, 2001, attacks. He noted that, ironically, “I was at Dewey and Ridgeway (avenues) of all places, right in front of the fire station.” The bishop likened the magnitude of 9-11 to remembering where one was when he or she first heard the news of John F. Kennedy’s assassination, recalling that he was teaching high school at the time; and the day that World War II ended, when as a small boy he took part in a parade.

Bishop Clark emphasized that the story of these pivotal historic moments need to be passed down to future generations. He added that it’s also vital for Catholics to promote peace, healing and reconciliation — not just toward each other, but to all people regardless of their religious beliefs. He suggested throwing our arms open to others without judgment, just as the father did to his prodigal son in that day’s Gospel reading.

This year’s national observances of 9-11 were forced to share headlines with controversy — the planned construction of an Islamic center near Ground Zero, and the intent by a non-Catholic church leader from Florida to burn Islamic scriptures on Sept. 11 (the threat was subsequently withdrawn by the church’s pastor, Terry Jones.) On Sept. 9, Rochester diocesan officials issued a statement “expressing our strongest objections” against the planned Quran burnings. Since 2001 the diocese has worked hard to strengthen relations with the Muslim community, emphasizing the similarities between Muslims and Catholics and pointing out that the Sept. 11 attacks were the work of Muslim extremists.

Appleby, who recited The Fireman’s Prayer after Communion at the cathedral Mass, said he was more focused on remembering the tragic nature of 9-11 than the recent dissent surrounding it.

“t’s just very important as a firefighter. We lost so many of our brothers in 9-11 and we’re losing so many more (to health reasons) because of the aftermath,” said Appleby, a parishioner of St. John the Evangelist in Spencerport, adding his hopes that the diocese will continue holding an annual commemorative Mass: “I don’t think we should ever forget.”