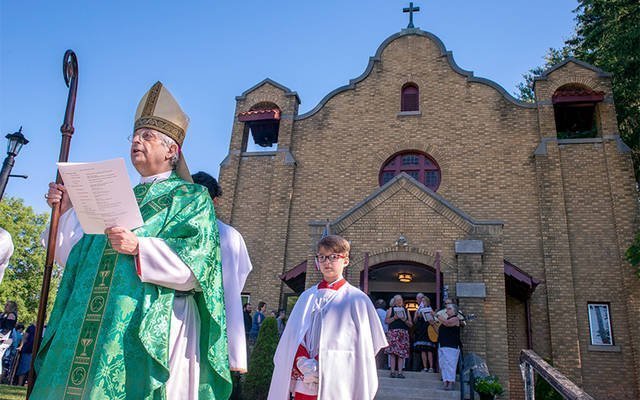 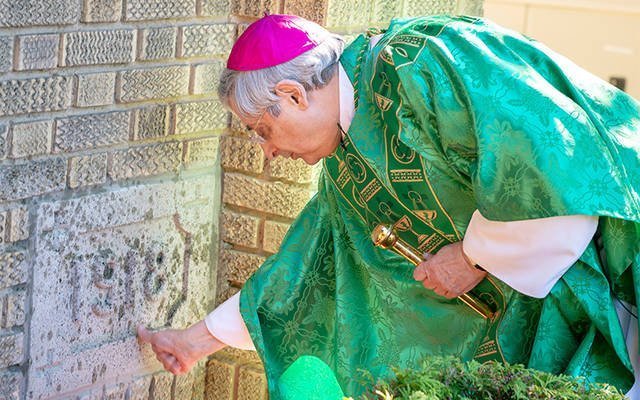 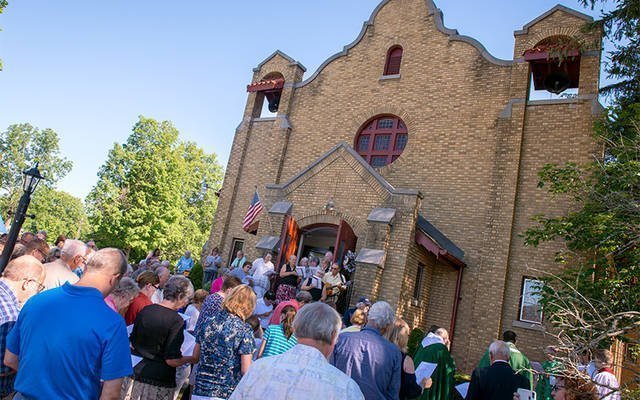 Parishioners of St. Pius V Church in Cohocton gather outside for a cornerstone blessing by Bishop Salvatore R. Matano July 8 in celebration of the building’s 100th anniversary. (Courier photo by Jeff Witherow)

COHOCTON — On a sunny morning and with its pews filled to capacity, St. Pius V Church was the scene of a celebration honoring the building’s century-long existence.

Bishop Salvatore R. Matano presided at the special Mass on July 8 — exactly 100 years and one day after the church’s cornerstone had been laid. Just prior to the start of the anniversary liturgy, Bishop Matano blessed that same cornerstone as Mass-goers watched near the church’s front entrance. All then processed into St. Pius V for a festive liturgy.

Mary Meese, who has belonged to the church for all of her 83 years as well, added, “Oh, it was so beautiful to be (seated) way up front and have the bishop there.”

Toward the end of Mass, several Holy Family parishioners were honored as part of the parish’s annual Christian Witness recognition noting members who model Christianity in their words and actions. This year’s honorees are Daniel and Gail Cox, Gregory and Amy Keagy, Gerald Kiesl, Kevin Kilbourne, Mary Ann Scharmberg, Norman “Ed” Schneider, Deacon Daniel and Sharon Slattery, Daniel and Roxanne Supulski, and Michael Van Durme. Following Mass, participants walked over to Sturmer Hall for Holy Family’s annual picnic, which was planned this year to coincide with the centennial liturgy.

The July 8 festivities paid tribute to a church community that dates back to 1860, when Masses were first celebrated in a home. Prior to that time, worshipers would walk as many as 20 miles to attend Mass in Perkinsville. In 1861, a church opened on Hill Street, when the Village of Cohocton was then known as Liberty. It was given the name St. Pius V in 1863 by Bishop Joseph Timon of Buffalo. (The Diocese of Rochester would not be formed until 1868, and St. Pius V didn’t become a part of the Rochester Diocese until 1896.) A new portion was added to the church in 1883.

A sad day in the Steuben County parish’s history occurred on Jan. 15, 1918, when the original structure was destroyed by fire; because a blizzard was occurring at the time, firefighters could not arrive in time to save the building. However, a new church was quickly erected at 35 Maple Ave., with groundbreaking beginning in May 1918. Rochester Bishop Thomas F. Hickey laid the cornerstone on July 7, and he then returned to Cohocton to dedicate the brick building on Oct. 27.

Several artifacts from that pivotal year of 1918 were recently uncovered when a time capsule, which had been inserted into the cornerstone, was carefully removed in early June thanks to the efforts of Holy Family parishioners John Landino, Mike Landino, Don Eck and Ed Schneider. Among the items contained in the time capsule are a short list of attendees at the 1918 cornerstone-laying; a prayer card in memory of Bishop Bernard J. McQuaid, the first Bishop of Rochester; and an issue of the Cohocton Valley Times-Index newspaper of Jan. 16, 1918, detailing the church fire.

St. Pius V is Holy Family’s southernmost church. The parish’s other three worship sites are St. Mary, Dansville; Sacred Heart of Jesus, Perkinsville; and St. Joseph, Wayland. All four churches were clustered in 1998 and became a single parish in 2004. Through these and other transitions that have taken place over the years, Wise and Meese said that St. Pius V has retained the positive qualities making it so special to them.

“We’re all family here — the body of Christ and the body of the church,” stated Wise, a longtime religious-education instructor and rosary-society president whose ancestors where among St. Pius V’s founding members.

“It’s a friendly place,” added Meese, whose involvement at St. Pius V has included parish council, choir and cleaning duties. “Everybody is friendly — no matter who you are or where you came from, we try to be friends.”