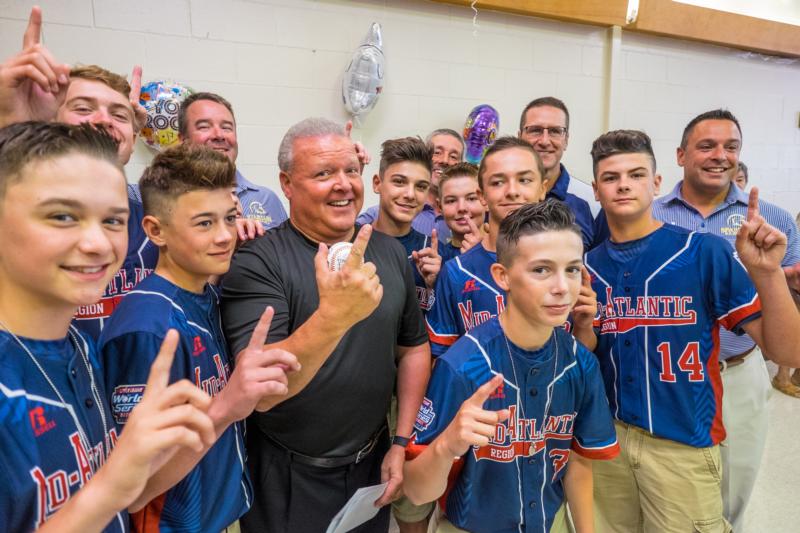 The Maine-Endwell Little League World Series Champion team members and coaches pose with Father Clarence F. Rumble, pastor of the Church of the Holy Family in Endwell, N.Y., holding baseball, during a reception held in their honor after Mass at the church. Father Clarence is pastor to most of the team members and coaches.
By Deacon Tom Picciano
Catholic News Service
ENDWELL, N.Y. (CNS) — When this year’s Little League World Series champs returned home, dozens of law enforcement, fire and emergency vehicles with lights flashing and sirens blaring led them through the welcoming crowd in Endwell.
Vehicles with family members were just ahead of the bus carrying the Maine-Endwell Little League players the day after they emerged victorious in Williamsport, Pennsylvania. The Mid-Atlantic Region champions beat the Asia-Pacific Region champions 2-1.
Thousands came out to greet them that day, Aug. 29, including Father Clarence F. Rumble of the Church of the Holy Family in Endwell, pastor to most of the team and coaches.
In the days following their triumphant return, the team appeared with the New York Mets and New York Yankees, as well as the Binghamton Mets.
But their welcome to Mass celebrated by Father Rumble at Holy Family Sept. 11, the anniversary of the 2001 terrorist attacks on the U.S., was different. Six of the 11 players and all of the coaches are parishioners.
As Mass started, Father Rumble mentioned the day — 15 years since the “darkest of days in history” — which he noted happened before the team members were born.
“One event was tragic and one is celebratory! Today during this Mass of thanksgiving, we rejoice in this team’s accomplishments on and off the field,” he said.
“Be thankful for your God-given talents, which you have developed and strengthened with perseverance and hard work,” said Father Rumble. “Your talent, your joy, your compassion and your sportsmanship are just a few of the reasons this parish community is very proud of you.”
Hundreds of people jammed the pews. Dozens of others stood in the back. Many wore the blue and gold shirts of Maine-Endwell or the blue and red of the Mid-Atlantic team. In addition to the championship, the team received the Jack Losch Team Sportsmanship Award.
Players and coaches had walked down the center aisle at the beginning. Each was given a part, taking up the gifts, offering petitions and doing the readings.
One of the players, Jude Abbadessa, read from Exodus. Later, he reflected on similarities between delivery of words at Mass and baseball.
“I was confident in both. I was worried in both. I just did it,” Jude told The Catholic Sun, newspaper of the Syracuse Diocese. He takes mom Alicia’s advice, he said: “Just read loud and slow. And for baseball, just play your own game and have fun playing.”
Scott Rush is manager of the team; his son Conner plays on the team. Along with the other adults, Scott made use of time away from home to converse with the boys about things other than baseball.
“We talked a lot about how to carry yourself, how to treat other people with respect, on and off the field. As 12-year-olds, we were happy that at least some of it sunk in and they were a great group of kids. I think their faith and the way they were brought up by their parents goes a long way into how they carry themselves,” he said.
“It’s a great community we live in. It’s a great parish,” Scott added. “It’s a great group of 11 kids. Great families. Great community. Community support was overwhelming.”
That support included a letter of congratulations from Syracuse Bishop Robert J. Cunningham. Each player received a copy along with rosary beads blessed by the pope.
After Mass, hundreds of people gathered in the parish’s social hall to greet the Maine-Endwell Little League team, which presented a check for $2,500 to Mercy House, a home for those with terminal illnesses.
– – –
Deacon Picciano is a contributing writer to The Catholic Sun, newspaper of the Diocese of Syracuse.
Copyright © 2023 Catholic News Service, Inc. All rights reserved. Linking is encouraged, but republishing or redistributing, including by framing or similar means, without the publisher's prior written permission is prohibited.