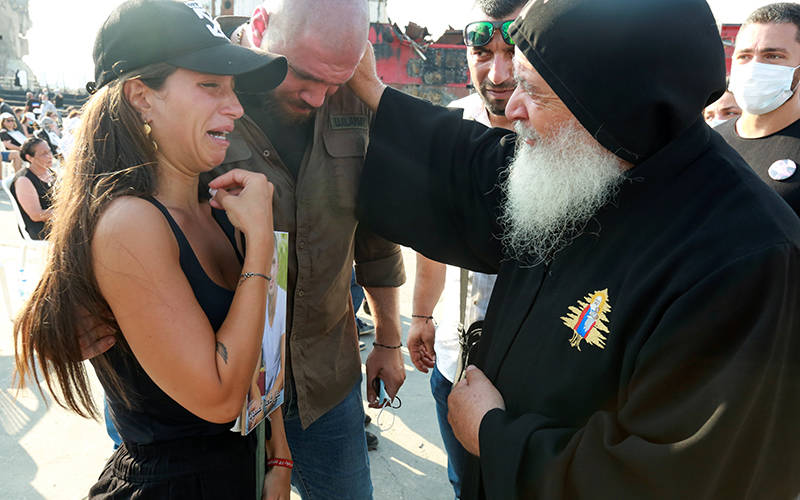 A clergyman comforts relatives of victims during a Mass to mark the one-year anniversary of Beirut’s port blast Aug. 4, 2021. The explosion killed more than 200 people, injured more than 6,000, and displaced more than 300,000. (CNS photo by Mohamed Azakir/Reuters)

Pope appeals for aid to Lebanon one year after blast

BEIRUT (CNS) — A year after the catastrophic Beirut port blast, the wounds of the people in Lebanon are scarred by the memory of the tragedy, and cries for justice escalate. This year, Aug. 4 was declared a national day of mourning in Lebanon.

Clutching a framed photograph of her husband Elie, 27-year-old Nancy Khouzami told Catholic News Service: “It’s a hard day. But today is a day of strength.”

“I’ve been weak every day for a year,” she added.

Elie Khouzami was one of 10 firefighters from the Beirut Fire Brigade who died at the port. The couple had been together for 10 years and were married just one month when he died.

“He was full of life. Full of energy. Time was very precious to him,” Nancy Khouzami said of her husband, noting that he “turned 33 in heaven.”

Gathering under the scorching sun at the brigade headquarters, Khouzami was joined by families and friends of the deceased firefighters, ahead of a Mass at the port, about a mile away.

“The Mass is important because it’s happening where the heroes died,” Khouzami said. “We don’t want the blood of our heroes to go in vain. Because of their blood we will make a new Lebanon.”

Khouzami, a Maronite Catholic whose husband was Greek Orthodox, told CNS: “I still can go on only because of my faith. My faith gave me the strength to continue.”

Fahim Farhat came from Houston; it was his first visit to his homeland since his 79-year-old mother, Marie, was killed in the blast.

Farhat’s mother was a patient in Beirut’s St. George Hospital, recovering from surgery for a broken hip. He had just talked to her by video call from Houston an hour before the blast. The force of the blast collapsed the ceiling in her hospital room, killing her.

St. George is about a half-mile from the port, but the blast was so powerful that buildings were affected more than 12 miles away, and the tremor was felt on the island of Cyprus, 165 miles across the Mediterranean Sea. One of the largest non-nuclear blasts in history, it was blamed on the detonation of 2,750 metric tons of ammonium nitrate stored for years in a port warehouse.

Farhat’s brother Joseph had just visited his mother and was exiting the hospital when the blast hit, hurling him. A nurse about 30 feet away from Joseph Farhat was killed as a result of the tremendous force.

Farhat, a Melkite Catholic who works as a family physician in Houston, called on “the international community to be very supportive of the Lebanese people, because this is a crime against humanity.”

“And I call on The Hague, the highest court in the world, to create an international tribunal to investigate and hold those people who are behind the blast responsible and obtain justice for the Lebanese.”

The port Mass was organized by a group of Maronite, Melkite and Roman Catholic priests known as “Église pour le Liban” (Church for Lebanon), who have been helping the families of the victims and those affected by the blast for the past year.

On his way into the Mass site, one of those priests, Maronite Father Hani Tawk, said: “Today is a big day. We will celebrate our martyrs, celebrate our victims and celebrate justice also. For us, it’s a miracle to celebrate the Mass here. From the death, we celebrate life.”

Mass was by invitation to family members of the blast victims, the injured and those whose homes and livelihoods had been destroyed. No politicians or government officials were invited.

Surrounded by wreckage near the damaged grain silos, families of the victims were among the first to arrive, seated directly in front of the altar. Songs broadcast from speakers punctuated the emotional ambiance, including the haunting “Le Beirut” from Lebanon’s renowned singer Fairuz, and “The Prayer.”

Maronite Father Elias Maroun Gharious stopped by each family member. “May God bless you and protect you,” he said, taking the time to listen to those who needed to share their pain. Some embraced the priest, crying.

The ceremony began with a recitation from the Quran, a minute of silence at 6:07 p.m., the exact time of the tragedy, and the recitation of the names of the victims.

Cardinal Bechara Rai, Maronite Catholic patriarch, was the main celebrant. He was surrounded by the Vatican nuncio to Lebanon, Archbishop Joseph Spiteri; Syriac Catholic Patriarch Ignace Joseph III Younan; and more than a hundred bishops and priests. Three choirs sang at the Mass.

In his homily, Cardinal Rai said, “We are here to witness the unity of Christians and Muslims in loyalty to Lebanon alone.”

“We stand together humbled between destruction and ruins. We light the torch of hope and the future and write a new history for generations.”

“What are the people in power waiting for in order to address people’s needs?” he asked. “To what bottom are they waiting for the country to reach so that their hearts can move and they feel the people’s pain and work on alleviating it until it is removed?”

Aside from the trauma and suffering of the blast, Lebanon is in the throes of an extreme economic crisis, which the World Bank calls one of the worst in the world since 1850. Since late 2019, Lebanon’s currency has lost more than 90% of its value, plunging more than 50% of its population into poverty.

The port blast killed 214 people, left more than 6,000 injured, made some 300,000 people homeless and shattered lives and livelihoods in Beirut and beyond. There has yet to be justice or accountability for the catastrophe.

“We are here to demand truth and justice,” Cardinal Rai said. “We want to know who took these explosive materials to the port, who allowed their storage and transport, who knew the danger,” he said.

“Whether the port bombing was a result of negligence or a terrorist act, it is, in any case, an attack on our existence,” he said.

Cardinal Rai offered encouragement: “I say to you, people who are wounded in the depths of your hearts: Trust and believe that God loves you, suffers with you, lives in you, and relieves your sorrows. On the fourth of last August, Jesus was on the cross with us, and today he invites us to the resurrection with all that it means from the depth of faith, inner peace and life.”

Thanking Pope Francis for his solidarity and prayers, Cardinal Rai cited the words spoken by the pope that same morning: “My dear Lebanese, my desire is great to come and visit you, and I will not tire of praying for you, so that Lebanon will return to be a message of brotherhood and a message of peace for the whole of the Middle East!”