Mass draws students from near and far - Catholic Courier 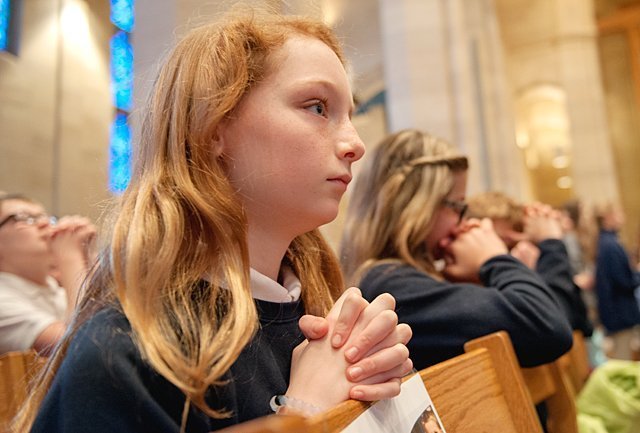 Leah DeFilippo, a sixth-grader at Holy Family Elementary School in Elmira, joins her classmates in prayer during the Feb. 3 Mass.

ROCHESTER — With school and charter buses lined up all around Sacred Heart Cathedral, it was obvious that something special was taking place on the morning of Feb. 3.

Those vehicles contained students and faculty from all parts of the Rochester Diocese — Monroe County, Finger Lakes and Southern Tier — as they united inside the cathedral for a special Catholic Schools Week liturgy celebrated by Bishop Salvatore R. Matano.

"I was really excited to see the bishop and have been thinking about it since they told me (I was coming)," said Ally Finnerty, a sixth-grader at Holy Family School in Elmira, who was among those traveling the furthest to attend the Mass.

Bishop Matano, meanwhile, expressed excitement as well at seeing an overflow congregation assembled inside the cathedral.

"This is a great gift, the beautiful future leaders of our church and our country. What an extraordinary gift you are," the bishop exclaimed to students at the start of Mass.

The liturgy had a festive tone right from the beginning, when during the opening procession students carried colorful banners representing their respective schools and placed them near the altar. Enhancing the atmosphere was the sight of several hundred young people in their school uniforms filling the pews.

Madelyn Beale, a seventh-grader from All Saints Academy in Corning, noted that she, too, was caught off guard by the large turnout.

"I didn’t know how many different schools were coming," she said.

Another impressive element was the cathedral itself. Numerous students craned their necks and looked around in wonder as they approached and entered the diocese’s mother church, for which an extensive renovation was completed in 2005. Ally and Madelyn, who were visiting the cathedral for the first time, gave high marks to the regal structure.

""It’s very, I’d say, beautiful — very artistic," added Steven Gough, a sixth-grader at St. Mary Our Mother School in Horseheads, who was making his second trip to Sacred Heart. He served as one of the student gift-bearers during the liturgy.

Immediately following the Mass, students and faculty members lined up to receive the Blessing of the Throats, as the liturgy was held on the feast day of St. Blaise. Then it was time to file back onto their buses and return to their various schools and communities, where Catholic Schools Week celebrations continued with a variety of spiritual, social and service activities. Ally, for one, noted that she had played the flute during a school Mass at St. Mary Church in Elmira just the day before.

For Steven, the journey to Rochester was a highlight as his lengthy association with St. Mary Our Mother School begins to wind down. This is his eighth year overall there, dating back to his time as a prekindergartner. As he prepares to move on to Elmira Notre Dame High School next fall, Steven expressed gratefulness at the support he has received over the years from his St. Mary Our Mother instructors.

"They’re not, just, teachers for the class. They’re personal teachers," he said. "They want you to do your best."