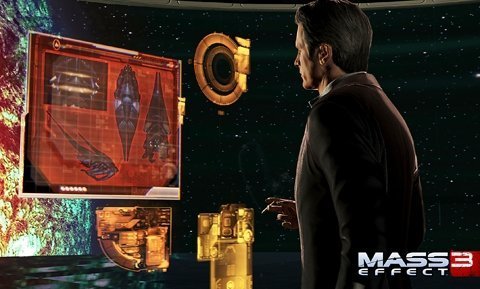 NEW YORK — A fairly reliable measure of the popularity of a game franchise is the way its latest installment is marketed. So when Electronic Arts launched copies of their new title, "Mass Effect 3," into space on weather balloons, it was a pretty good indicator that, as playwright Arthur Miller might have put it, "attention must be paid."

To those who have played the previous two episodes of this sci-fi trilogy, the brouhaha over the release will be understandable. The series, after all, is renowned for its intuitive gameplay, compelling plot and jaw-dropping graphics. "Mass Effect 3" achieves that hat trick, but fails to score any fresh points.

The player is thrown back into the boots of Commander Shepard, whose first name and gender can be determined by the gamer. Shepard is one of the few humans to recognize that an ancient race of machines known as the Reapers — who are said to be returning, after a 50,000-year break, to destroy every organic life form in existence — are not only real, but are indeed back in town.

Having spent the first two games being (almost) universally disbelieved, this concluding chapter opens with Shepard being proved spectacularly correct as the Reapers introduce themselves to Earth in typically apocalyptic style, and immediately start eating large chunks of the planet.

Commander Told-You-So must now resist the urge to rub everyone’s nose in it, and instead round up the many races of the game’s futuristic setting to rally around and fight back against this new threat.

The core of the 30-plus-hour-long gameplay — as experienced on the Xbox 360 — is spent going on alliance-building missions, almost all of which require either conversation, cover-based shooting or a mixture of both. This makes the proceedings fairly violent, but gore is kept to a relative minimum.

For those approaching the game from a Judeo-Christian spiritual perspective, however, it’s the kind of personal customization on offer that gives rise to serious difficulties. Fundamentally, this involves the player’s ability to act as a vigilante, achieving theoretically laudable ends by patently immoral means. In this regard, the Catholic Church has always upheld St. Paul’s teaching that Christians are not permitted to practice evil that good may come of it.Additionally, the game allows participants to form one-on-one acquaintances that may turn carnal, but never become committed. Such encounters are both rare — if they happen at all; for most players they won’t — and relatively nongraphic, with the scenes fading to black before things get too explicit. Nevertheless, two very significant problems remain.

Such off-kilter values — moderately aggravated by a sprinkling of bad language — make this a very different Mass Effect than the one faithful Catholics are used to experiencing.

Also available for the PlayStation 3 and Microsoft Windows.

The game contains frequent violence with some blood, a benign view of homosexual acts and of casual sexual activity, brief partial nudity, a possible suicide, infrequent uses of profanity and occasional rough and crude language. The Catholic News Service classification is O — morally offensive. The Entertainment Software Review Board rating is M — Mature.