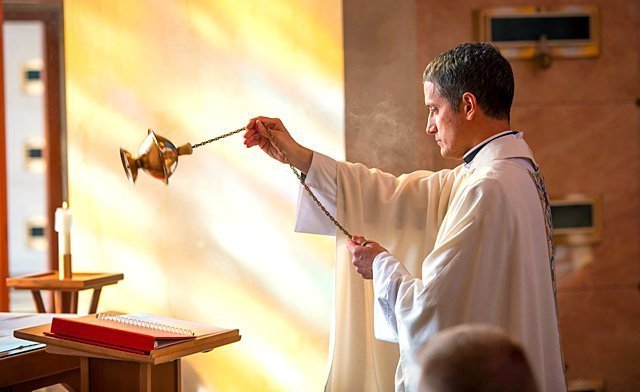 Father John Loncle blesses two Books of Remembrance during the Mass of Healing for Miscarriage and Infant Loss at Holy Sepulchre Cemetery’sChrist Our Light Mausoleum Oct 15. (Photo by Greg Francis)

ROCHESTER — A common thread connected the 21 people whose first names were announced during a prayer of the faithful Oct. 15.

They never got to experience life outside their mothers’ wombs, or only did so for a brief time.

Yet theirs were human lives just the same, worthy of the same love and respect as any other person.

That emphasis was the basis for uniting mothers, fathers and other loved ones at a Mass of Healing for Miscarriage and Infant Loss. The liturgy took place in the Christ Our Light Mausoleum chapel at Holy Sepulchre Cemetery.

“We recognize the existence of human life from the moment of conception. We accord that child the human dignity we are all due,” Father John Loncle, celebrant, told the gathering. “God never forgets us or any of his children, especially those children whose loss brought us here today.”

Janene Loughran and Molly Hickey, organizers of the Mass, are now striving to establish a year-round effort by forming a local Elizabeth Ministry — an international movement for encouraging women in matters of childbearing, family and marriage. Hickey, a parishioner of St. Joseph in Penfield, said the new chapter would be “more specific to miscarriage and infant loss, because we feel that’s a need that’s not being met in other places.”

Plans are for the chapter to be based at St. John the Evangelist in Spencerport — where Father Loncle is pastor — with support from the Diocese of Rochester. Two memorial Masses would be celebrated annually, as was the case in 2016. Along with the recent Mass at Holy Sepulchre, a liturgy for miscarriage and infant loss was held May 7 at East Rochester’s St. Jerome Church. It was celebrated by Father William Leone, pastor, who also concelebrated with Father Loncle on Oct. 15.

Loughran and Hickey said a key element of the Elizabeth Ministry would be connecting women from various parishes so they can provide hope and healing to each other.

“It’s women who have gone through a loss themselves, ministering to other women,” said Loughran, who belongs to St. Jerome.

Offering this opportunity, she added, allows those affected to share pent-up feelings about their babies who were lost recently or even many years ago. Too often, Loughran remarked, “It becomes this silent, unspoken grief. The statistics are that one in four pregnancies end in miscarriage, and it’s not something that’s often talked about.”

Loughran and her husband, Dermot, have five living children in addition to three who were lost to miscarriage and a son, John Paul, who survived for only an hour after he was born in 2011. She said that her grief was greatly eased by friends who reached out, and now she wants to provide that same type of outreach to others. One such person she assisted was Hickey, whom she met after Hickey and her husband, Ryan, lost their twins, Joseph and Grace, who were stillborn at 18 weeks this past January.

Additional means of support in the Diocese of Rochester are offered by Pittsford’s St. Louis Parish, which has operated an Elizabeth Ministry since 1999; St. Joseph Cemetery in Auburn, where a Mass is held each first Tuesday of August to honor babies who have been lost to abortion, miscarriage, stillbirth or infant death; and Arnot Ogden Medical Center in Elmira, where an interfaith program organized by the hospital’s perinatal bereavement committee took place Oct. 15.

As painful as it is to lose an unborn or infant child, Hickey said the new Elizabeth Ministry also accentuates the positive by paying tribute to those lives.

“Our intention is really to honor life and the sacredness of all life, more than dwelling in our sadness,” Hickey said.

She and Loughran added that it’s important to emphasize the humanity of all these children in the face of laws and public opinion that support aborting the unborn.

“We live in a culture and a time where unborn life isn’t always respected,” Hickey said, adding that through Elizabeth Ministry and similar efforts, “I don’t think you can portray a pro-life message more strongly.”

EDITOR’S NOTE: To learn more about Elizabeth Ministry in the Diocese of Rochester, e-mail ElizabethMinistryroc@gmail.com.