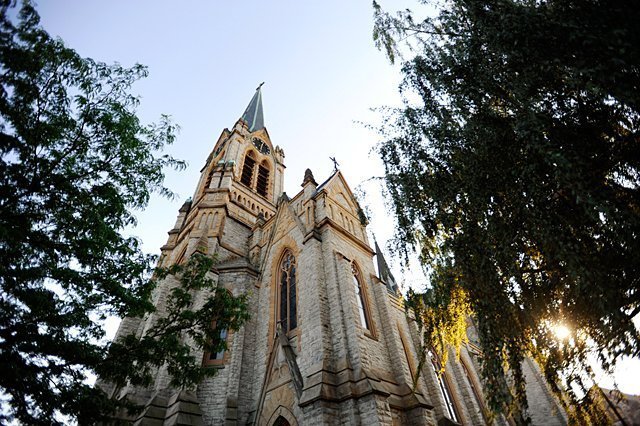 Diocesan officials are hoping a mob of people will descend on Rochester’s St. Michael Church on April 19 for its regularly scheduled 4 p.m. Mass.

That is the point of a Mass Mob, after all.

The first Mass Mob was held in the Diocese of Buffalo in November 2013, when a successful social-media campaign drew 400 people to a Mass at St. Adalbert Basilica. The concept of holding one-time events to boost attendance at and awareness of historic inner-city churches took off, and since then, Mass Mobs have been held in other dioceses across the country as well as locally, where bloggers organized a Mass Mob at St. Stanislaus Kostka Church in Rochester last May.

The upcoming Mass Mob at St. Michael, 869 N. Clinton Ave., Rochester, is being organized by the Diocese of Rochester’s Department of Evangelization and Catechesis in conjunction with Siena Catholic Academy in Brighton, and hopefully will be the first of several such events, according to Martin Kilbridge, Siena’s principal. Shannon Loughlin, associate director of the Department of Evangelization and Catechesis, said she hopes the Mass Mob provides an opportunity for people to experience the wonderful community, impressive Gothic architecture, gorgeous interior and phenomenal music at St. Michael, which is part of St. Frances Xavier Cabrini Parish.

"The architecture and music combine to create a gem in our diocese that should be shared with everyone," Loughlin said.

The city of Rochester is dotted with beautiful churches, but over the years many Catholics have moved out of the city and now worship in suburban parishes, Kilbridge said. Many of these Catholics are unfamiliar with the diocese’s urban churches and the many gifts they have to offer.

"This is a way to invigorate those churches, but even moreso, I think it’s a way to invigorate the spiritual and liturgical lives of the wider Catholic community. I think so many of us grew up and are affiliated, rightly so, with our parishes, but we don’t have too many opportunities to witness the beautiful architecture and liturgical practices that go on in other churches," Kilbridge said. "I think a lot of suburban Catholics, especially younger ones, don’t have a lot of exposure to that kind of Gothic architecture and that beauty. They don’t have that much exposure to that kind of liturgical space."

Mass Mob organizers also hope the event, which they will promote via social media, will attract young adults who grew up Catholic but either have fallen away from the church or found their religious experiences unsatisfying, Kilbridge said.

"There are 20-somethings who are fresh out of college and have started their careers … and they’re living in the city and looking for some way to spark their spiritual lives," he said.

"This is a great connection for people who have been seeking a community of faith or just a different experience of worship," Loughlin noted.

The Mass Mob also will provide a rare opportunity for the Siena community to come together for worship, said Kilbridge, noting that the school draws students from a large number of parishes, so students and their families don’t necessarily worship at the same churches each weekend. The student body attends Mass together at various times throughout the year, but it’s hard for many parents to be a part of those daytime Masses, he said.

The event’s organizers hope people will stick around after the Mass is over to mingle, admire the church’s architecture, and enjoy sandwiches and a potluck supper provided by St. Frances Xavier Cabrini Parish and Siena’s school community. Once the Mass Mob at St. Michael is over, organizers will create a digital survey to gather suggestions about where to hold the next event, Loughlin said.