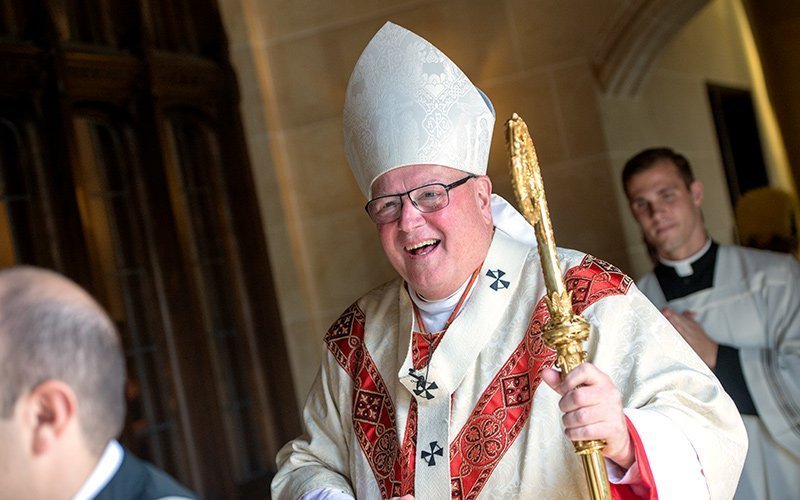 Cardinal Timothy Dolan processes into Rochester's Sacred Heart Cathedral before celebrating a Sept. 22 Mass in recognition of the Diocese of Rochester's 150th anniversary. 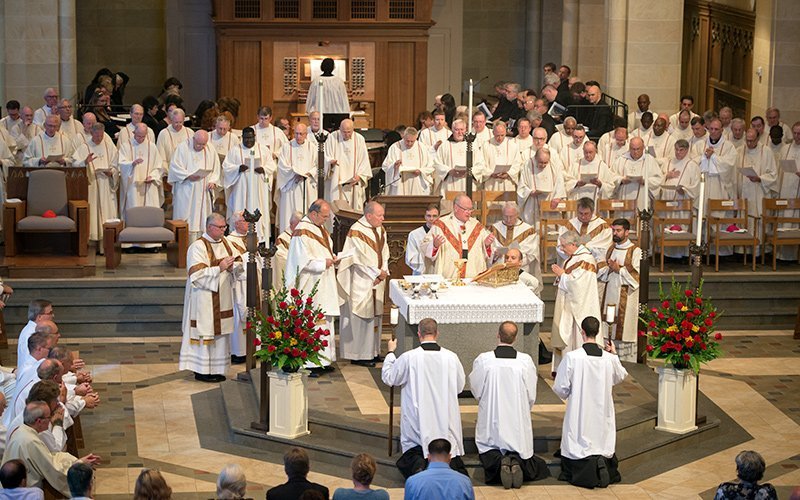 It was an enthusiastic response to Cardinal Dolan’s declaration, “All I know is, for 150 years this Diocese of Rochester is where Christ has lived and lives. Congratulations, diocese.” The congregants’ applause was followed by laughter as Cardinal Dolan added, “You don’t look bad for 150.”

Those upbeat reactions reflected the joy permeating the cathedral on a sunny Friday afternoon, as Cardinal Dolan — leader of the Archdiocese of New York — presided at the diocesan 150th-anniversary Mass. The liturgy was attended by clergy and lay representatives from all parts of the diocese, and was concelebrated by such dignitaries as Bishop Salvatore R. Matano, the ninth Bishop of Rochester who has led the diocese since 2014; Bishop Emeritus Matthew H. Clark, Rochester’s bishop from 1979-2012; and Syracuse Bishop Robert J. Cunningham, who served as Rochester’s apostolic administrator from 2012-14.

The Mass paid homage to a Catholic territory that was established in 1868 by decree of Pope Pius IX. Broken off from the Diocese of Buffalo, the Rochester Diocese was originally made up of the counties of Monroe, Livingston, Ontario, Wayne, Cayuga, Seneca, Yates and Tompkins. In 1896 four additional counties — Steuben, Chemung, Schuyler and Tioga in the Southern Tier — were added from the Buffalo Diocese to make up the current 12-county diocese.

Elements of the Rochester Diocese’s early history were on display Sept. 22. For instance, the principal chalice used for the Mass was that of Bernard J. McQuaid, founding diocesan bishop, who served in that position for 41 years until his death in 1909. In addition, a ceiling design in the cathedral’s eucharistic chapel took on special meaning for the jubilee liturgy, as the artwork depicts a star-lit evening sky as it is believed to have appeared on the night of the diocese’s founding on March 3, 1868.

As a special way of observing the 150 years that have since elapsed, Bishop Matano has declared June 2017-June 2018 as the Year of the Eucharist. Cardinal Dolan, during his homily Sept. 22, noted the appropriateness of Bishop Matano’s initiative. Quoting Jesus’ command at the Last Supper, “Do this in memory of me,” Cardinal Dolan declared that “your shepherd (Bishop Matano) has invited you to return to those words” by taking the Year of the Eucharist to heart.

Bishop Matano, meanwhile, remarked that the Eucharist has been a constant throughout a century and a half of change in the Rochester Diocese.

“Our joy and our hope over these years has been the abiding presence of Jesus Christ in the Most Holy Eucharist,” Bishop Matano said during his welcoming remarks.

The sesquicentennial liturgy lasted 90 minutes and was enhanced by music from the diocesan choir. At a crowded post-Mass reception in the cathedral’s narthex, a particularly large throng enveloped Cardinal Dolan, one of the most well-known Catholics in this country, who served as president of the U.S. Conference of Catholic Bishops from 2010-13. He was making his third trip to Sacred Heart Cathedral since taking over the New York Archdiocese in 2009, having also appeared at the cathedral in 2010 and 2012.

Known for his gregarious personality, Cardinal Dolan was all smiles Sept. 22 as he posed for pictures, doled out hugs, blessings and quips, and even playfully hooked his crosier, or staff, around a boy’s neck to pull him closer for a conversation.

His most oft-used greeting for his well-wishers?