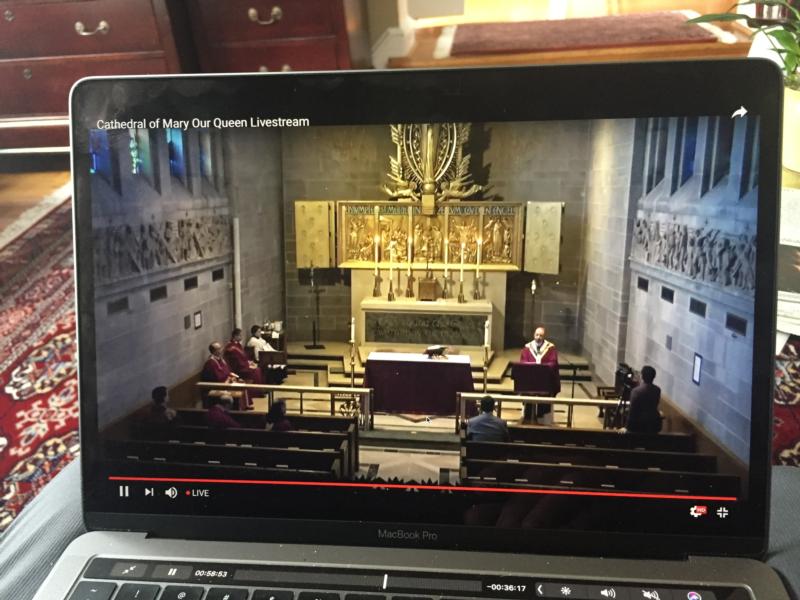 A viewer watches a livestream Mass from the Cathedral of Mary Our Queen in Baltimore celebrated by Baltimore Archbishop William E. Lori and a few concelebrants March 15, 2020. (CNS photo by Ann M. Augherton/Arlington Herald)

In another time, just about any city of a certain size had television station that offered a Sunday morning “Mass for Shut-Ins.” With the advent of digital communication, there are many ways to watch Mass in communities where public Masses have been halted in response to the coronavirus pandemic.

One of the pandemic’s biggest gut-punches was the wholesale cancellation of public Masses in dioceses throughout the country, as local health officials kept lowering the maximum number of people who could be at “public events” — and the word “liturgy” is derived from ancient Greek, signifying it as the public work of the people. That number went from 1,000, then to 500, then 250, 100 and even 60 or fewer.

Granted, Jesus did say, “Wherever two or three are gathered, there am I in the midst of them.” But these days, it may be a clergy celebrant with an “assembly” made up largely of a TV broadcast crew.

Such was the case in New Jersey, as Cardinal Joseph W. Tobin of Newark celebrated Mass that was livestreamed on the archdiocese’s website. There was no music and no incense. A single liturgical lay minister read in Spanish. During the consecration, Cardinal Tobin broke the Eucharist in two and shared it with Deacon Asterio Velasco, the coordinator of the archdiocese’s Hispanic ministry, during a 45-minute bilingual Mass.

The Mass was livestreamed with an estimated 3,000 watching. It has been archived at www.youtube.com/user/NwkArchdiocese, the archdiocese’s YouTube channel. It also can be accessed on its Facebook and Twitter channels, @NwkArchdiocese, and at www.rcan.org.

The Eternal Word Television Network has a daily Mass on the homepage of its website. It can be accessed directly at https://www.ewtn.com/catholicism/daily-readings, but an “EWTN Family Prayer” precedes it, and viewers won’t know for sure that it’s Mass they’re watching until about 1:40 in. The Mass lasts nearly an hour.

On the EWTN cable channel, Mass with Pope Francis airs at 2 a.m. weekdays and 3:30 p.m. Sundays, with an hourlong daily Mass showing at 8 a.m., noon and 7 p.m. EDT Mondays-Saturdays. A Sunday Mass is shown at 8 a.m. EDT, with reruns at noon and midnight EDT.

CatholicTV.com, a service of the Archdiocese of Boston, has a repository of daily Masses for the 2020 season of Lent to date. It can be accessed at http://www.catholictv.org/masses/catholictv-mass. CatholicTV also just launched a new website to view Masses: www.watchthemass.com.

On CatholicTV itself, daily Mass is shown Mondays-Saturdays at 9:30 a.m. EDT and rerun at 7 and 11:30 p.m. Mondays-Fridays. Also, Mass with Pope Francis from Casa Santa Marta airs at 12:30 p.m. EDT weekdays and Sundays. On Saturdays, a prerecorded Mass celebrated at the Loretto Abbey in Toronto can be seen at 9:30 a.m. Later on Saturdays, a Mass celebrated at the Basilica of the National Shrine of the Immaculate Conception is shown at 7 and 11:30 p.m.

On Sundays, a Mass in Spanish is seen first at 8 a.m. EDT, with reruns at 5:30 and 10 p.m. A Sunday Mass from the Basilica of the Sacred Heart in Notre Dame, Indiana, at can be seen at 10 a.m. EDT. A bilingual Mass from San Fernando Cathedral in San Antonio is shown at 4 p.m. EDT. A fourth Sunday Mass can be seen at 7 and 11:30 p.m. EDT. CatholicTV is also available on Roku, Amazon Fire and Apple TV.

The Archdiocese of Chicago said effective March 21, it would put Masses celebrated at Holy Name Cathedral in English, Spanish and Polish on its YouTube channel. The practice would continue, the archdiocese said, ” until in-person attendance at liturgies is reinstated.” The YouTube channel can be accessed at https://www.youtube.com/watch?v=tKRKZs9wcek&amp;feature=youtu.be.

The Archdiocese of Denver, in a March 13 statement, said the bishops of Colorado’s three dioceses would suspend public Masses in keeping with Gov. Jared Polis’ directive banning gatherings of more than 250 people. Masses can be seen on Denver’s PBS affiliate, KBDI, in English 6:30 a.m. MDT and in Spanish at 7 a.m. The archdiocese added it would upload recorded Masses on its website, www.archden.org.

In Michigan, TV stations still broadcast Masses, although sometimes they charge for the airtime. In the Diocese of Grand Rapids, an hourlong Mass and rosary airs at 10 a.m. EDT Sundays on Fox affiliate WXMI. In Detroit, Fox affiliate WJBK airs a half-hour Mass at 6 a.m. EDT.

The Detroit Archdiocese decided March 13 to livestream a Mass from Blessed Sacrament Cathedral March 15. About 6,000 took in the livestream, according to Bing Eberhart, program director for the Catholic Television Network of Detroit, and the archdiocese plans to continue the livestreaming through Passion Sunday. Some viewers, though, complained of glitches.

The Diocese of Brooklyn, New York, which dispensed its faithful from the Sunday Mass obligation in the wake of the COVID-19 pandemic, also has a cable TV offering of its own, NET TV. A live Mass is shown Sundays, at 11 a.m. in English, a prerecorded Mass in English is shown Saturdays at 6 p.m., and a prerecorded Spanish Mass is aired at 1:30 p.m. EDT Sundays.

Other dioceses that have gone the YouTube route include the Archdiocese of San Francisco and the Diocese of Phoenix.

Heart of the Nation televises a Sunday Mass through a syndicate of local stations, claiming more than 150 stations throughout the United States. Details on channels, dates, times, cable systems and satellite dishes can be obtained through https://www.heartofthenation.org/where-to-watch.

Jai Agnish in Newark contributed to this report.