Masses, rallies recall the lives of those lost to abortion since 1973 - Catholic Courier 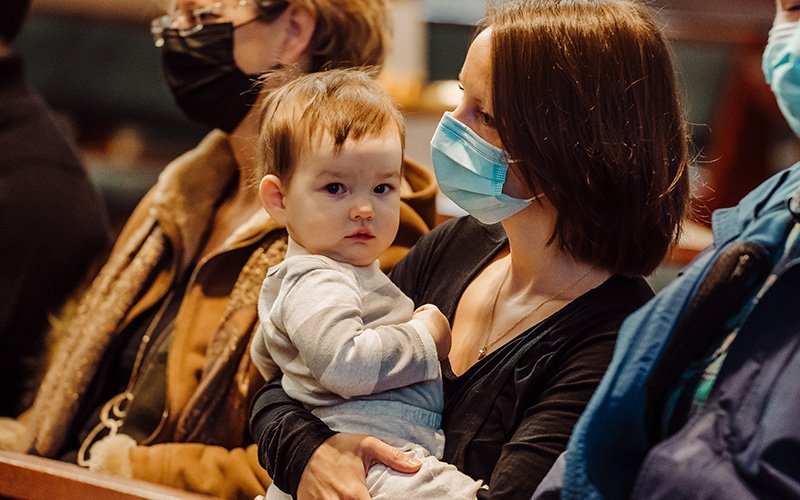 Detroit families attend a Mass for "the protection of the unborn" Jan. 23, 2021, at the Cathedral of the Most Blessed Sacrament in Detroit. (CNS photo by Valaurian Waller, Detroit Catholic)

CARMEL, Ind. (CNS) — As often seems to be the case, Jan. 22 was the coldest day of the week as hundreds of people in central Indiana participated in a solemn observance of the 48th anniversary of the U.S. Supreme Court decision legalizing abortion.

But the cold temperatures and a wind chill in the 20s didn’t faze those who gathered at a rally in support of life at St. Elizabeth Seton Parish in Carmel, north of Indianapolis.

“If standing in this cold is just one thing we can do to save a baby today, let’s do it all day long,” recently sworn-in Indiana Attorney General Todd Rokita, a Knights of Columbus member, told the estimated 450 people gathered around an outdoor soundstage. Others were assembled in cars to listen via livestream or Catholic Radio Indy.

The event was one of numerous prayer vigils, special Masses, online events and in-person rallies nationwide to mark the anniversary of the court’s Roe v. Wade decision.

The Carmel rally concluded several events sponsored by the Archdiocese of Indianapolis, the Diocese of Lafayette in Indiana and Right to Life of Indianapolis to mark the ruling. Earlier in the day, the archdiocese sponsored a Mass celebrated by Archbishop Charles C. Thompson.

In the pro-life battle, “our opponent is not a particular person or group of persons,” the archbishop said in his homily during the Mass at St. John the Evangelist Church in Indianapolis.

“Our opponent is with the evil that underlies what Pope Francis has referred to as a ‘throwaway society’ … (that) readily discards anything that is deemed useless or undesirable, including … human life,” he said.

“All these, with abortion at the forefront, contribute to a culture of death,” he said.

To change society to a culture of life, “the first person we must begin with is our self,” he said.

“When confronted with differences of opinions or opposition to our values, do we respond in a Christian manner or react in a defensive or threatened mode? Are we able to recognize those that oppose or disagree with us as created in the image of God?”

Each person is a child of God and a sinner in need of salvation, the archbishop said.

Therefore, he continued, pro-life efforts “must be rooted in a holistic commitment to defending the dignity of all persons — including the unborn, the immigrant, the refugee, the poor, the addicted, the prisoner, the sick and the elderly — all woven into the fabric of what it means to be a human being created in the image of God and saved by the passion, death and resurrection of Jesus Christ.”

After the Mass, congregants joined the Indiana March for Life, which this year took place as a caravan through the center of Indianapolis. More than 100 cars, trucks and buses slowly processed along most of the usual march route, horns honking and students chanting and waving signs.

And rather than stopping at the State Capitol building for the traditional rally, the caravan headed to the Carmel church, which is located in the Lafayette Diocese. There, participations cheered and honked horns at different points throughout the rally.

Elsewhere, those who had gathered for Mass at the Cathedral of the Assumption in Louisville, Kentucky, Jan. 22 to remember the court’s decision heard that looking into the face of a stranger and seeing a person created in God’s image is what it truly means to stand for life.

Archbishop Joseph E. Kurtz of Louisville celebrated the Mass as part of a Day of Prayer for the Protection of Unborn Children. It followed the Archdiocese of Louisville’s annual Walk for Life.

The archdiocese usually sends a delegation of young people to the annual March for Life in Washington, but chose to limit participation to local events because of the pandemic.

Archbishop Kurtz thanked the congregation of about 200 people for taking part in the walk and making a public statement about their beliefs.

“You walked publicly without knowing who might see you,” he said.

The archbishop noted that he was ordained in March 1972, so he had not marked his first year as a priest when the Supreme Court’s Roe decision was announced 10 months later. Yet, he said, he wrote a letter to the editor of a local newspaper.

Looking back, he’s not sure if it was a good letter, but the important thing is, “it was a public act,” he said.

“It was an act in which I declared myself,” he explained. “There are times we would like to live in the shadows and let other people act … not to be participants but to be spectators. But with the pro-life movement, there are no spectators. … You and I are modern apostles. We’ve been called as the Gospel message says and we’re being “sent.”

What motivated him back in 1973 to write that letter, other than the fact that he was studying theology, was his brother George Kurtz, who was born with Down syndrome, he said.

In Detroit, Archbishop Allen H. Vigneron said pro-life advocates will never give up proclaiming the dignity and value of the unborn because Jesus has won the war over sin and death Jan. 23 during a special Mass for “the protection of the unborn” at the Cathedral of the Most Blessed Sacrament.

The Supreme Court decision, which led to the “legitimacy of the evil of abortion becoming woven into the fabric of our Constitution,” he said, has resulted in more than 63 million lives lost in nearly five decades. Yet, he continued, Catholics and others refuse to allow such woe to have the last word.

“We will not give up because we know we are victorious in Jesus Christ,” the archbishop said. “Life is invincible, more powerful than death. In Christ, life has triumphed. Christ has overcome. He is the Lord. He is in charge of history, and he will make everything work unto his purpose for the accomplishment of God’s will to restore creation.”

Archbishop Vigneron remarked the Roe anniversary was “certainly a sad occasion,” but also a chance for pro-life Catholics to reflect upon Christ’s victory over death.

“The great power of Jesus Christ is that he is able to take even what might seem like the failures of the last 48 years and he transforms them into steps toward his victory,” Archbishop Vigneron said.

The Mass followed other local events, including a rosary led the night before by Father John Carlin, associate pastor of St. Joseph Parish in Lake Orion, Michigan.