Massgoers urged to be open to Lord's mercy, be 'instruments of his mercy' - Catholic Courier 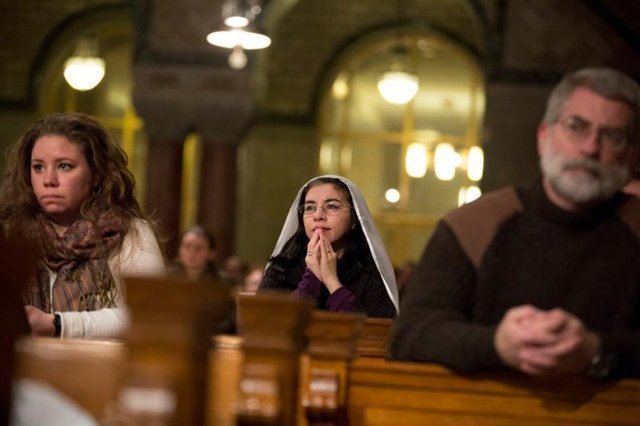 People pray before the Blessed Sacrament after the opening Mass for "24 Hours for the Lord" at the Basilica of the National Shrine of the Immaculate Conception in Washington March 3.
By Julie Asher
Catholic News Service
WASHINGTON (CNS) — The "annual retreat" of Lent is the "opportune moment to re-establish the Lord" as the center of one’s life and quiet time spent in adoration of the Blessed Sacrament is a chance to really listen to what God is saying, Archbishop Timothy P. Broglio said in a homily March 3.
"We must be attentive," he said, even "when the Gospel seems demanding, out of touch, or opposed to our desires, apparent gain or whatever."
The archbishop, who heads the U.S. Archdiocese for the Military Services, was the main celebrant at an early evening Mass in the Crypt Church at the Basilica of the National Shrine of the Immaculate Conception in Washington to open the shrine’s observance of "24 Hours for Lord," a worldwide Year of Mercy project initiated by Pope Francis.
At the Vatican, in Rome and in many dioceses around the world, Catholic churches were to have extended hours for confessions as part of the project.
In Washington, a 48-hour period for the observance was scheduled at the national shrine, with continuous exposition of the Blessed Sacrament throughout that time, including overnight hours. An early evening closing Mass March 5 was to be celebrated by Bishop Paul S. Loverde of Arlington, Virginia, followed by a eucharistic procession.
Archbishop Broglio told the more than 200 people attending the opening Mass they were gathered at a most appropriate place to mark "this special day of mercy" proclaimed by the pope, because the national shrine is "a place of constant healing where priests are available to administer divine pardon to those who seek it."
He opened his homily by sharing an allegory often used by best-selling author Matthew Kelly to illustrate the importance of the Eucharist.
The story is of a mysterious fatal infection spreading around the world, devastating populations, forcing physicians and scientists to work "night and day to find an antidote," Archbishop Broglio said. One day they find a young boy who has a natural immunity that could produce a vaccine. His parents are told their son could save the world, but that he must make the ultimate sacrifice — his life.
"The parents are beside themselves, but they see there is no choice," the archbishop said. "The vaccine is successful and the human race is saved."
When the boy’s parents want to commemorate the first anniversary of the sacrifice of their son, "the response is tepid," he said. Most have somewhere else they need to be — a sports event, "a sale not to be missed," chores — and had no time to give thanks.
"We gather this evening to give thanks," Archbishop Broglio said. "First we must listen and then respond with decisiveness. The whole process is prayer."
Being able to listen "is no mean feat in contemporary society," he continued. "Everyone buries his or her head into an electronic device. Family conversation can be ruined. Human interaction is faulty."
In the day’s first reading, the prophet Jeremiah "is clear," he said. "Essential to conversion is hearing the voice of the Lord. Do not harden your hearts," Archbishop Broglio said.
The day’s Gospel passage from the prophet Joel warns against closing one’s heart and mind to the Lord and his message, he said.
"We place our trust in the Lord and listen to his voice," Archbishop Broglio said. "Otherwise all our works are in vain."
Returning to the story he began his homily with, the archbishop said that just as the parents of the child who was sacrificed to give life "invited others to commemorate his loving gesture, the Lord allows us to participate, to be present and to share in his one sacrifice that gives eternal life."
He urged Massgoers "to be open to the Lord’s mercy and to be instruments of it."
At the start of Mass, Msgr. Walter R. Rossi, rector of the national shrine, welcomed the congregation to the Crypt Church and noted that Pope Francis had described the special observance taking over the next two days as a "moment of intense prayer" that "will enable people to touch the grandeur of God’s mercy."
"May these days of eucharistic adoration, these ’48 Hours for the Lord,’ bring God’s mercy, abundant blessings upon all who come before the Lord in Mary’s shrine as well as for those who unite themselves with us in spiritual communion at home."
The Eternal Word Television Network was broadcasting the opening and closing Masses live. The liturgies were also being aired on Catholic TV and New Evangelization Television.
Copyright © 2023 Catholic News Service, Inc. All rights reserved. Linking is encouraged, but republishing or redistributing, including by framing or similar means, without the publisher's prior written permission is prohibited.