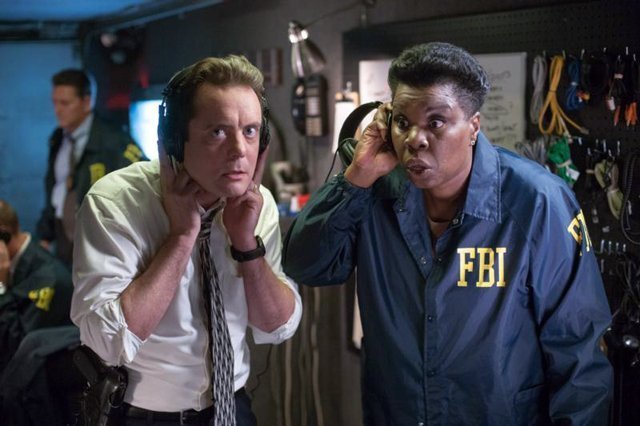 Jon Daly and Leslie Jones star in a scene from the movie "Masterminds." The Catholic News Service classification is A-III -- adults. The Motion Picture Association of America rating is PG-13 -- parents strongly cautioned. Some material may be inappropriate for children under 13.
By Kurt Jensen
Catholic News Service
NEW YORK (CNS) — It seems obvious that bank robbery, especially in real life, makes a better subject for drama than for comedy.
And nothing in the Zach Galifianakis vehicle "Masterminds" (Relativity) — a comic recounting of the 1997 "hillbilly heist" from an armored-car firm in North Carolina — does anything to undermine that easily-arrived-at conclusion.
While the film is at least remarkably free of vulgarity, especially given the low-minded cast of so much screen comedy these days, it’s still marred by a few lapses into crassness.
Director Jared Hess and screenwriters Chris Bowman, Hubbel Palmer and Emily Spivey take as their premise the idea that Southerners with dead-end jobs who live in trailer parks are inherently funny. They evidently left it up to the actors — many of them from NBC’s "Saturday Night Live" — to work out their own character quirks, with highly uneven results.
Galifianakis spends a lot of time ridiculing himself, targeting his hirsute appearance, squeaky manner and juvenile personality. He’s variously compared to one of the Twelve Apostles, TV critic Gene Shalit and the love child of Kenny Rogers and Kenny Loggins. All this is intermingled with slapstick chases and the occasional gross-out gambit.
As for the main business at hand, that famous theft, names have not been changed to protect the guilty. David Ghantt (Galifianakis), a vault supervisor for Loomis Fargo &amp; Co., grabbed $17.3 million in bundled cash from the company’s facility in Charlotte, North Carolina. Although that still ranks as the second-highest dollar amount ever stolen in the United States, Ghantt was tripped up at every turn by his own ineptness and that of his co-conspirators.
Ghantt had a girlfriend, Kelly Campbell (Kristen Wiig), who talked him into committing the crime with the help of her friend, Steve Chambers (Owen Wilson). The plan was for Ghantt to take off for Mexico with a small amount of the loot, with Campbell and Chambers to join him some time later. Their highly questionable calculation was that federal investigators would eventually lose interest in the case.
The movie gives Ghantt a harridan fiancee, Jandice (Kate McKinnon), as a further inducement to head south of the border. The real Chambers, believing that the FBI was only interested in Ghantt, hired a hit man, Michael McKinney (Jason Sudeikis), to eliminate Ghantt in the belief that he’d never be suspected of his partner’s murder — another dubious assumption.
In a bid for both laughs and pathos, McKinney is portrayed as being so stupid that he believes he and Ghantt, who used McKinney’s identity to cross into Mexico, are long-lost twin brothers.
Ghantt, Campbell and Chambers were, from all accounts, dimwitted and boorish criminals. They quickly called attention to themselves through lavish spending, including the purchase of a mansion for Chambers that featured — yes, this is the iconic comedy moment — a framed portrait of Elvis Presley on black velvet.
Justice eventually catches up with the miscreants thanks to the work of a deadpan FBI agent named Scanlon (Leslie Jones). A series of jokes about her appearance were apparently meant to be edgy; they register instead as crudely racist.
The film contains light sexual banter and some crude humor. The Catholic News Service classification is A-III — adults. The Motion Picture Association of America rating is PG-13 — parents strongly cautioned. Some material may be inappropriate for children under 13.
– – –
Jensen is a guest reviewer for Catholic News Service.
Copyright © 2023 Catholic News Service, Inc. All rights reserved. Linking is encouraged, but republishing or redistributing, including by framing or similar means, without the publisher's prior written permission is prohibited.