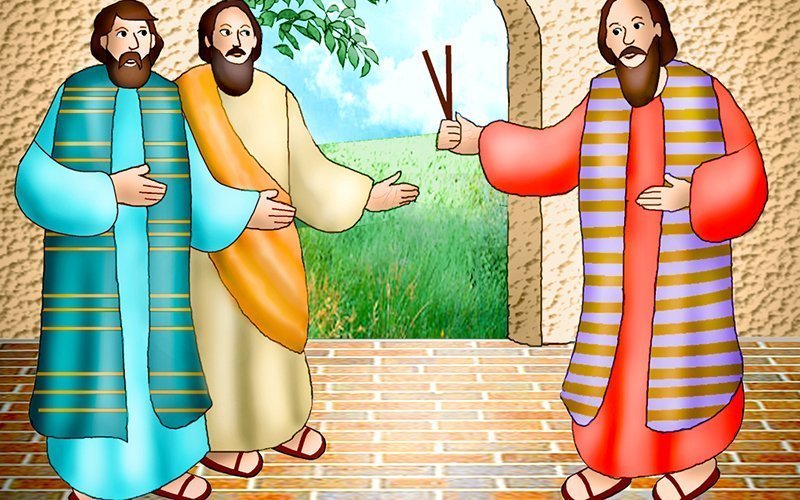 Matthias is chosen to replace Judas

Matthias is chosen to replace Judas

Jesus revealed himself to his followers after he had risen from the grave. He told them, “Wait for the promise of the Father about which you have heard me speak; for John baptized with water, but in a few days you will be baptized with the holy Spirit.”

In answer to one of their questions, Jesus said, “But you will receive power when the holy Spirit comes upon you, and you will be my witnesses in Jerusalem, throughout Judea and Samaria, and to the ends of the earth.” Then Jesus was lifted up into a cloud and disappeared. As the disciples returned to Jerusalem, they tried to understand what they had just seen. They stayed in Jerusalem as Jesus had directed them. They were often joined in their prayers by Mary, the mother of Jesus, and a few other men and women.

On one of those prayerful days, when more than 100 people had gathered, Peter stood up, because he had something to say to everyone there. “My brothers,” he said, “the scripture had to fulfilled which the holy Spirit spoke beforehand through the mouth of David, concerning Judas, who was the guide for those who arrested Jesus. He was numbered among us and was allotted a share in this ministry. It is written in the Book of Psalms, ‘Let his encampment become desolate, and may no one dwell in it.’ and ‘May another take his office.'” Peter explained that someone should be appointed to take the place of Judas, who had betrayed the Lord, and who was now dead. “[It] is necessary that one of the men who accompanied us the whole time the Lord Jesus came and went among us, beginning from the baptism of John until the day on which he was taken up from us, become with us a witness to his resurrection.”

After thinking about who would fit Peter’s description and also would be able to fill the role, two people were nominated, Joseph and Matthias. One of the men in the group prayed before a decision was made. “You, Lord, who know the hearts of all, show which one of the two you have chosen to take the place in this apostolic ministry from which Judas turned away to go to his own place.”

The selection was made by the drawing of lots, and the lot went to Matthias.

Q&A
1. What did Jesus tell his disciples to do?
2. Which disciple said it was time to replace Judas?

The four Gospels of Matthew, Mark, Luke and John tell us the story of the life and teaching of Jesus.

Another document has recently been in the news. It is called the “gospel of Judas.” The only known copy of this text, which was found by artifact thieves in the 1970s, was made public by the National Geographic Society in early April.

This document claims that Jesus and Judas were good friends, and that Jesus confided in Judas things he never told the other disciples. This document is believed to have been written by the Gnostics, who mixed Christian beliefs with pagan ideas, and believed that knowledge was the path to salvation.

The National Geographic Society believes the copy is genuine and was made about 300 years after Jesus walked on the earth. This story of Judas was discussed and argued about when it was first written, and the same thing is happening now, almost 2,000 years later.

St. Jeanne La Pucelle (1412-1431), more familiarly known as St. Joan of Arc, was born on the feast of the Epiphany. During much of Joan’s childhood, France was in the grips of a civil war and was invaded by the army of the British king Henry V. When she was 14 years old, Joan had a vision, the first of many, that started her on a path of service to the Lord and eventually led to martyrdom.

Joan heard what she called “The Voices,” who would direct her to make certain demands, such as an audience with representatives of the king. Joan requested that an army be given to her to fight for the French village of Orleans. After much questioning by his advisors, the king granted Joan’s request.

She led the army in white armor. Joan was successful in this battle, but was later later betrayed and given over to the British, who had her tried as a witch and a heretic. Joan remained true to God and was burned at the stake at the age of 19.