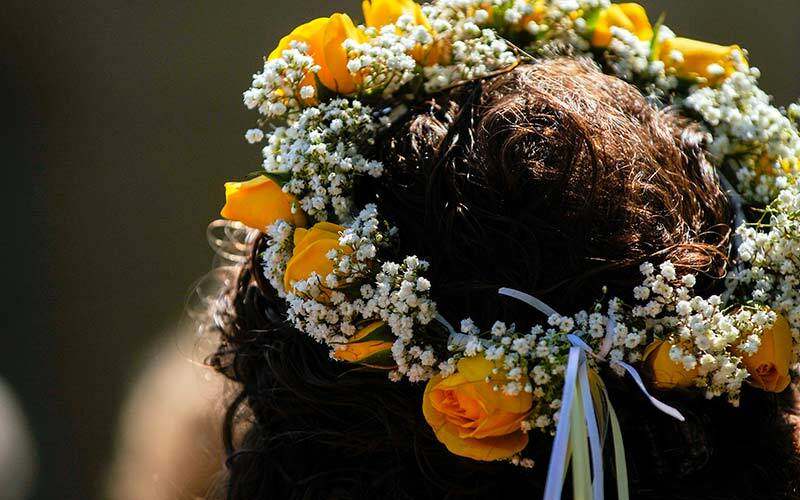 A crown of flowers is seen during the May 25, 2012, May Day celebration at Our Lady of Mercy High School in Brighton. (Courier file photo)

When 7-year-old Phoebe Austin performs the featured role in an upcoming May crowning ceremony, she’ll be joining a Catholic tradition that dates back many centuries.

May crownings are presented annually at a number of parishes and Catholic schools across the Rochester Diocese. The ceremonies are scheduled during May, a special month of Marian devotion in the Catholic Church, and frequently take place in conjunction with Mass.

Established as a Catholic custom many centuries ago, May crownings center on placing a crown, typically adorned with flowers, atop a statue of the Virgin Mary in honor of her queenship as mother of Christ the King.

That will be Phoebe’s duty on Sunday, May 8, following the 9:45 a.m. Mass at St. Paul of the Cross Church in Honeoye Falls, when the congregation will process to a large statue of Mary outside the church. There, Phoebe will ascend a small ladder to position a crown upon the statue’s head as other worshipers place flowers in vases around the statue. Meanwhile, the parish choir will lead such hymns as “Bring Flowers of the Rarest” — a 19th-century song written specifically for May crownings — and “Immaculate Mary.”

Although the church doesn’t recommend dates May for crownings, Mother’s Day and May Day (May 1) are frequent options.

Sue Reynolds, who has coordinated May crownings at St. Paul of the Cross for approximately 20 years, noted that her parish’s event is organized by the Rosary Women group and typically takes place on Mother’s Day.

“It’s a great way to honor our Blessed Mother, and our own mothers, at the same time,” she remarked.

Reynolds selects a girl to crown the statue from a list of candidates suggested each year by Christine DeVito, faith-formation coordinator for the cluster of St. Paul of the Cross, St. Rose in Lima and St. Agnes in Avon. Like Phoebe, who is scheduled to receive first Eucharist May 15, the selected child often receives first Holy Communion during the spring.

Reynolds noted that the act of crowning the status is regarded as a special privilege. “The girls are always thrilled to be asked,” she said.

The invitations allow them to take part in one of the most popular Marian devotions celebrated in the Catholic Church during the month of May. According to the Salt and Light Catholic Media Foundation, May became a special month for honoring Mary starting in the 13th century, with rituals being observed during that month to connect the new life of springtime with the new, human life Mary gave Jesus.

At St. Paul of the Cross and elsewhere, young people typically are highlighted at May crownings. For instance, when Rochester’s Our Lady of Mercy School for Young Women observes its annual May Day celebration May 27, the May crowning — scheduled to take place at the school’s grotto following Mass — will be officiated by a May Court comprising several students.

The tradition at Our Lady of Mercy runs so deep that the school even presented a virtual crowning ceremony in the early weeks of the coronavirus pandemic in May 2020, even though in-person classes were not then being conducted.

In other parts of the diocese that year, Holy Cross Parish and School in Rochester hosted a drive-by May crowning on Mother’s Day, and Reynolds and her husband, Frank, quietly crowned their parish’s statue of Mary around the same time.

Meanwhile, in his “From the Bishop” column that month in the Catholic Courier, Bishop Salvatore R. Matano suggested that family May crownings as well as rosary recitations be conducted at home in keeping with the month’s Marian focus.

This year, May crownings have returned to much fuller community participation — and that’s good news at St. Paul of the Cross, where Reynolds said the ritual is a cherished event for parish members.

“We do have a very good turnout,” Reynolds said. “People love it, they just love it.”