McQuaid alum to be ordained a Jesuit priest in Philadelphia Aug. 8 - Catholic Courier 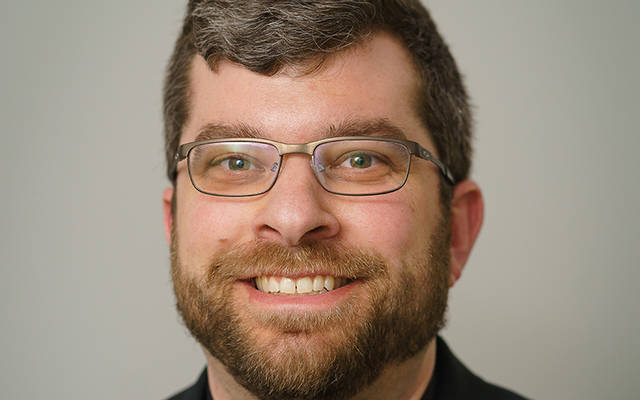 Deacon Jason G. Downer entered the Society of Jesus, also known as the Jesuits, a month after his 30th birthday. Now, just a few weeks after celebrating his 40th birthday on July 15, the Rochester native and graduate of McQuaid Jesuit High School will be ordained a Jesuit priest.

“I feel ready,” Deacon Downer told the Catholic Courier July 17 regarding his upcoming ordination. “I’m looking forward to it because I just I think it’ll be a really beautiful day.”

Deacon Downer will be ordained by Philadelphia Archbishop Nelson Perez Aug. 8 at 10:30 a.m. at St. Joseph University in Philadelphia. He originaly was scheduled to be ordained June 13, but the ceremony was postponed due to the coronavirus pandemic. Three other men, including Deacon Kevin Hughes, who taught math and science at McQuaid from 2014-17 while he was in formation to be a Jesuit, will be ordained with Deacon Downer. Each ordinand will be allowed 20 family and friends in attendance, Downer said, noting that his parents, sisters and godmother are planning to make the trip from Rochester for his ordination, which also will be livestreamed via Zoom.

Deacon Downer grew up attending the former St. Helen Church in Gates and graduated from McQuaid Jesuit High School in 1999. While he was at McQuaid, he said he fell in love with Ignatian spirituality. After high school, he attended Canisius College, a private Jesuit college in Buffalo. While at Canisius, Deacon Downer was involved in campus ministry activities, retreats and service trips.

He earned a bachelor’s degree in history and a master’s degree in college student personnel administration. After graduate school, Deacon Downer worked in student affairs for a few years at Fairfield University, a private Jesuit college in Fairfield, Conn. During his time at Fairfield, he led a group of students to World Youth Day in Sydney, Australia, in 2008. It was there that Deacon Downer said he needed to stop running from and start taking seriously a vocation with the Jesuits.

“At the heart of it was always the idea of Ignatian spirituality of finding God in all things. The more Jesuits I knew and the more I worked at a Jesuit university, the more I felt called to do that (to be a Jesuit priest),” he explained.

In 2008, Deacon Downer began a two-year process of discernment, known as a novitiate period, in Syracuse. He professed his first vows in 2012. He earned a master’s degree in social philosophy from Loyola University in Chicago and master’s degrees in divinity and theology from Boston College School of Theology and Ministry.

While in formation, Deacon Downer was a chaplain at the Cook County Temporary Juvenile Detention Center in Chicago, Ill., and worked in campus ministry at St. Peter’s University in Jersey City, N.J. He also spent six weeks working as a nurse’s aide at Calvary Hospital in the South Bronx, an experience that he said had a profound effect on him.

“I was able to spend time with patients who are in their final days, the most vulnerable stage, feeding them and caring for them,” he recalled. “It was just this experience of growing in such deep trust with God and experiencing grace knowing how close God was to these people who were dying and giving me the strength to just be there with them and provide them with whatever physical needs they needed at that moment.”

Deacon Downer was ordained to the diaconate on Sept. 21, 2019, at St. Ignatius of Loyola Parish in Chestnut Hill, Mass., which is where he also served as a transitional deacon.

Following his Aug. 8 priestly ordination, Deacon Downer will celebrate a Mass of Thanksgiving Aug. 9 at 10:30 a.m. at Rochester’s Our Lady of Lourdes Church, where his mother, Regina, and his godmother, Nancy DeRycke, both worked as pastoral associates.

“It (Our Lady of Lourdes) has been a place for the past few years where I have been able to come back and pray,” he said.