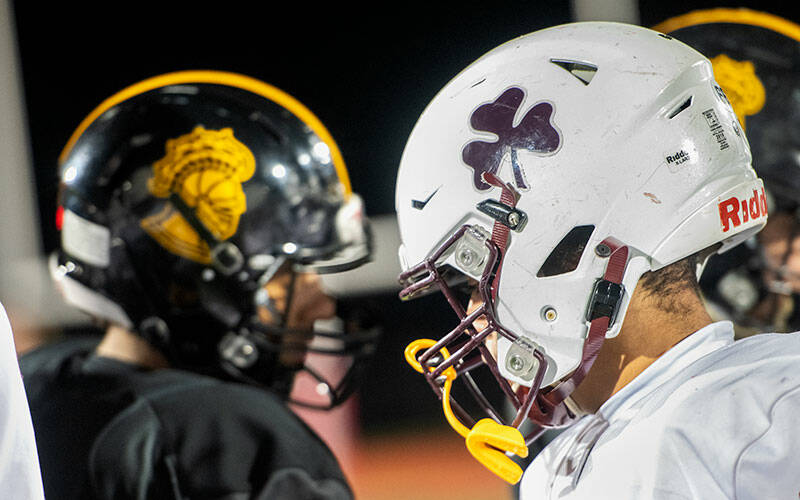 EDITOR’S NOTE: McQuaid Jesuit’s state quarterfinal against Bennett of Section 6 was not played as scheduled Nov. 20 due to a COVID-19 outbreak involving McQuaid players. At press time, the game had been rescheduled for the evening of Nov. 23. Check www.catholiccourier.com for updates.

By taking down an archrival in the title game, McQuaid Jesuit rules the roost in Section 5 Class AA football for the third straight season.

McQuaid scored a 28-14 victory over Aquinas Institute in the Section 5 Class AA final Nov. 13 in a classic battle of Catholic high-school powers. The win marked the second this season for the Knights over the Little Irish after McQuaid won a 22-21 thriller back on Oct. 15.

The rematch was tightly contested most of the way as well, with top-seeded McQuaid and No. 2-seeded Aquinas deadlocked at 14-14 entering the final quarter. Parris Smiley’s three-yard touchdown catch from quarterback John Mahar early in that period — the third scoring pass play of the night for the McQuaid duo — gave the Knights the lead for good. Kendal Burno clinched McQuaid’s victory with a 17-yard scoring run with less than 2:00 remaining. Other Mahar-to-Smiley touchdowns came late the first quarter, on a 20-yard play, and just before halftime on a 65-yard play.

For Aquinas, its first touchdown was scored on special teams — a 26-yard TD return by Sean Riley off a botched McQuaid punt attempt midway through the first quarter — and the other was by the defense, when Jahlil Johnson made an interception and 75-yard scoring return halfway through the third period to tie the game at 14-14.

McQuaid’s championship-game win marked the second time in three years that the Knights have defeated Aquinas in the sectional final, having also done so in 2019. The victory gave McQuaid a season record of 9-1, and a cumulative mark of 29-2 over the last three sectional-title seasons. McQuaid’s latest sectional title gives the football program an unprecedented distinction of having earned two sectional crowns in the same calendar year; the Knights also were the champs of Section 5 Class AA this past spring, after their season was postponed from the fall of 2020 due to the coronavirus pandemic.

Leading up to the championship contest against Aquinas, McQuaid had received a first-round bye as the top seed in Class AA. The Knights then rolled to a 27-0 halftime lead en route to a 27-6 win over fifth-seeded Victor in semifinal play Nov. 5, with their defense allowing only 112 total yards.

Aquinas, meanwhile, ended the fall with an 8-3 record. The Little Irish had advanced to the final with by winning 40-21 over No. 7 Fairport in quarterfinal action Oct. 29, with Will Benjamin gaining 187 yards on 17 rushes and scoring two touchdowns. This was followed by a 35-27 win over No. 3 Pittsford in semifinal play Nov. 5, as Benjamin ran for 179 yards on 19 carries and scored two TDs, and Eimaj Giddens added 124 yards on 13 carries with two rushing touchdowns and one receiving TD from quarterback Mykel White.