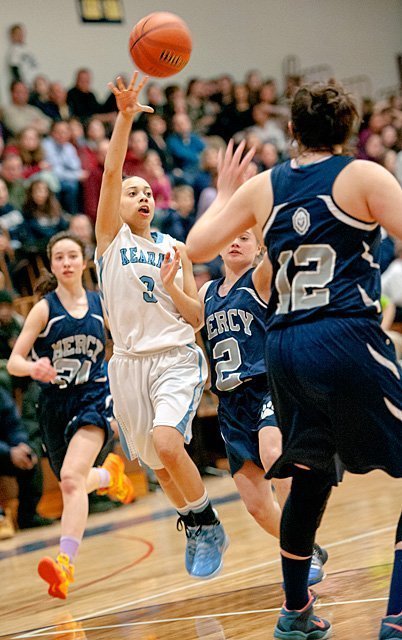 McQuaid won the NYSPHSAA Division 1 hockey title with a 6-2 victory over Baldwinsville in the title game March 15 in Utica. This marks the Knights’ second state title in school history, coming 10 years after the first one.

The Knights rocked Baldwinsville of Section 3, 6-2, in the Division 1 final. Jack Dugan totaled two goals and two assists, Michael Campbell added two goals, and Joe Pasko and Christian Leonardi were the other goal-scorers as McQuaid finished with a 22-2 record.

The Knights had earned their way into the state final with a 4-2 victory over Scarsdale of Section 1 in semifinal play a day earlier. McQuaid shook off an early 2-0 deficit on goals by Ryan Talty, Max Paroda, Campbell and Dugan. In state quarterfinal play March 7, McQuaid won 3-2 over Niagara-Wheatfield of Section 6 as Leonardi, Josh Tortora and Paroda all scored.

Preceding the state-championship run was a 3-2 triumph over No. 3 Fairport in the Section 5 Class A final March 1. The top-seeded Knights were led by goals from Lucien Rosedale, Talty and Leonardi.

The top-seeded Little Irish won the Section 5 Class AA crown March 7 with a 63-49 decision over No. 3 Fairport as Griffin Kornaker led his team with 15 points. AQ then logged a 76-70 win March 14 over Jamestown of Section 6 in state quarterfinal play as Jalen Pickett scored 22 points to help the Irish back from a five-point deficit in the fourth quarter.

In the semifinal against Brentwood of Section 8, Aquinas was down only 45-43 after three quarters but went scoreless for a five-minute stretch of the final period. Pickett and D.J. Roberts led their team with 16 and 12 points, respectively.

Kearney, the No. 1 seed in Section 5 Class A, won its fourth straight sectional by defeating No. 3 Our Lady of Mercy, 64-46, in the final March 6 as Kharysma Bryant, Princella McCullough and Bri.Asia Mason scored 22, 17 and 14 points, respectively.

The Kings went on to win 55-54 over Pittsford Mendon March 10 in state-qualifier play as Bryant had 24 points. BK’s season ended March 14 with a 58-44 loss to Williamsville South of Section 6 in state Class A quarterfinal play. The team’s final record was 19-5.

At the sectional championships held Feb. 19, Mercy won Class B with 111 points to best Brockport’s second-place total of 74. Event winners for the Monarchs were Emem Ikpot in the 300; as well as all three relays: the 800, 1,600 and 3,200. Mercy’s Alana Morrow then earned a berth in the state meet by finishing second in the 55 hurdles at the state-qualifying meet Feb. 28.

* Travasia Singletary captured the 55 and 300 dashes in leading the Aquinas girls to a third-place finish in team scoring at the Section 5 Class C girls’ meet Feb. 20.

* Notre Dame’s Garrett Butters (3,200) and Joe Barkley (weight throw) were event winners at the Section 4 Division 2 boys’ championship meet Feb. 14. Barkley also won the overall weight-throw title that day. He went on to place first in that event at the state qualifier Feb. 28.

* Jack Creatura of McQuaid Jesuit qualified for the Section 5 boys’ Alpine ski team at the state meet, where he placed 10th in the giant slalom Feb. 24.

* Mercy’s Logan Ellis made the Section 5 girls’ Alpine ski team for states, going on to take 10th place in the slalom Feb. 23.