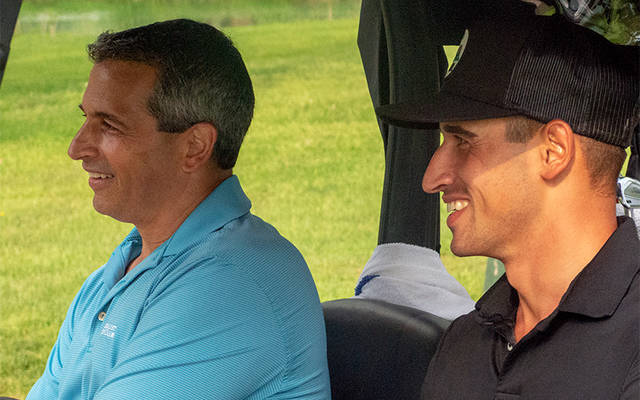 PITTSFORD — Two holes into a casual round on May 28, it was already apparent that Dominic Bozzelli is far from your average golfer.

On the 453-yard par-4 opening hole at Locust Hill Country Club, Bozzelli calmly rolled in a birdie putt to start his Memorial Day round.

“Those are the worst days, when you start with a birdie. It’s all downhill from there,” he quipped while walking off the green with the rest of a foursome that included his father, Dom.

Bozzelli’s prediction proved wrong on the 337-yard par-4 second hole; he made yet another birdie 3 en route to a 3-under-par total of 69 for the day.

In a sport where most regulars struggle to break 90, and scoring below 80 is considered exceptional, Bozzelli routinely reaches the high 60s and low 70s. The 27-year-old does so on highly challenging courses, against the world’s best golfers — a group he’s proven himself to be a part of.

Bozzelli, a 2009 McQuaid Jesuit High School graduate, is in his second year on the Professional Golfers Association tour. He’s coming off a brilliant rookie campaign that saw three Top 10 finishes: a tie for third place at the Valspar Championship; fifth place in the CareerBuilder Challenge; and a tie for 10th at the FedEx St. Jude Classic as he earned nearly $870,000 for the year.

To excel at such a high level is admirable for any golfer — yet Bozzelli’s ascent is even more remarkable considering he grew up in a place that, weather-wise, isn’t conducive to golf for much of the year. In fact, the 6-foot-tall Bozzelli is the first Rochester-area PGA touring pro since Jeff Sluman, who last played on the tour in 2007.

“I try to stay away when it snows here,” remarked Bozzelli, who currently resides in Palm Beach Gardens, Fla.

Growing up, Bozzelli compensated for the cold weather by practicing on a makeshift range in his grandfather’s basement that consisted of a net and small putting green. He began playing competitive golf at age 8, and at McQuaid won the state high-school title in both his junior and senior years — the first golfer from Section 5 to ever win two state crowns. At that time he belonged to Locust Hill and was a parishioner at St. Catherine of Siena in Mendon.

Bozzelli went on to win the New York State Amateur title in both 2011 and 2012. One of the nation’s top college recruits, he enjoyed a strong career at Division I Auburn University before his 2013 graduation. He turned professional that year and, after a successful showing on the Web.com Tour, earned his PGA playing card in 2016.

Looking ahead, Bozzelli is excited about his chances to garner his first PGA victory sometime in the near future.

“My game is very close. I’m optimistic,” he said, adding that his shoulder is feeling “the best it’s been in two years.”

He’s been pleased with his 2018 efforts thus far despite not yet returning to the Top 10. He noted that his line of work is a game of inches in which, for example, a putt lipping out of the cup can make a difference of many thousand dollars.

“One or two shots — it’s a fine line between eighth place and 28th place,” he said. “I control what I can control, work hard and show up with a positive attitude.”

A little help from above can come in handy, too. Bozzelli said that in conversations with his mother, Susan, she continues her longtime practice of reminding him to say a prayer before each round.

“That’s usually how she finishes (the phone call) off,” he said.

As he awaits that coveted first PGA win, Bozzelli said he’s fitting in comfortably on the tour, having made friends with such veterans as Charles Howell III, Jason Dufner and Jimmy Walker. He enjoys seeing different parts of the country, although he said the life of a PGA pro can be physically and mentally draining between practice, competition and travel — “I vacation at home and live on the road,” he remarked.

But you won’t catch Bozzelli complaining about his nomadic lifestyle, now that he’s risen to the top of a sport played by many but mastered by few.

“I’m lucky and blessed to be doing what I love for a living,” he said.