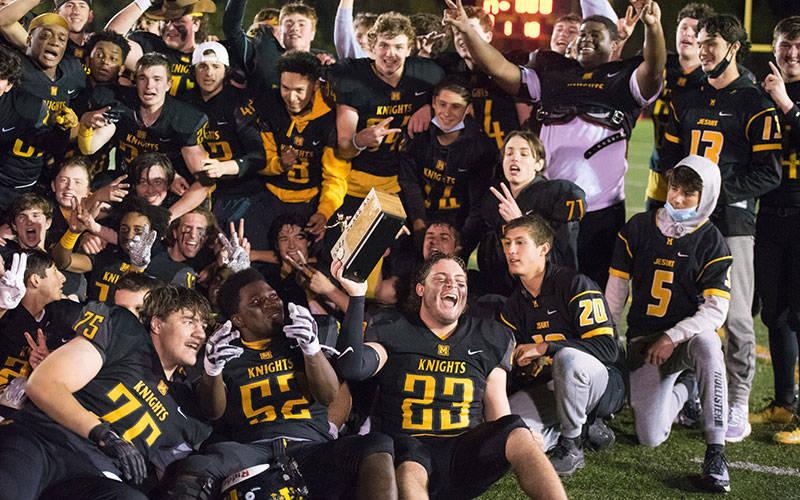 It was a few extra months in the making, but McQuaid Jesuit football has finally earned its second consecutive sectional title.

The Knights, seeded No. 1 in Section 5 Class AA, came from behind to stop No. 2 Victor, 17-14, in the championship game May 1 at McQuaid. That victory capped a perfect season for the Knights; both they and Victor had entered the title matchup with 7-0 records.

The game’s pivotal moment occurred 19 seconds into the fourth quarter. McQuaid had just fallen behind for the first time all night, 14-10, on the final play of the third period. But on the first play after the ensuing kickoff, quarterback Joe Cairns found Sam Perozzi down the right sideline, and Perozzi raced into the end zone on a 70-yard touchdown hookup.

That go-ahead TD marked the first time McQuaid had scored since the first quarter, when Cairns made a 12-yard TD run with 6:19 remaining for a 7-0 advantage, and Nick Wood — who also made both his extra-point attempts — booted a 23-yard field goal with :08 remaining to up the lead to 10-0.

Victor’s Rushawn Baker closed the Blue Devils’ deficit with a six-yard TD run one minute before halftime to make it 10-7 — and it was Baker again, this time on a 63-yard scoring run to end the third period, giving Victor its brief lead.

Following, the big scoring connection between Cairns and Perozzi, McQuaid’s defense stiffened for the rest of the fourth quarter, and the Knights soon had another sectional crown to add to their 2019 Class AA title. They are now repeat champions after having earned just one sectional crown previously in school history (in 1978). Last season, the Knights posted a 12-1 record and went to the state Class AA final; they now own a 20-1 record over the past two seasons.

McQuaid had reached the championship game against Victor with a 24-0 home win over No. 4 Pittsford in semifinal action April 24. Cairns and Perozzi combined on a 95-yard TD pass play and Cairns added scoring runs of 10 and 4 yards, with Wood chipping in with a 38-yard field goal and three PATs as the Knights did all their scoring before halftime.

The sectional championship — and football season — were a long time coming: High-school football is normally a fall sport, but the 2020 campaign was postponed until early 2021 because of concern over spread of the coronavirus. Also due to COVID-19, the Knights will not have a chance for another state-tournament appearance; all state playoffs for the 2020-21 school year have been cancelled.