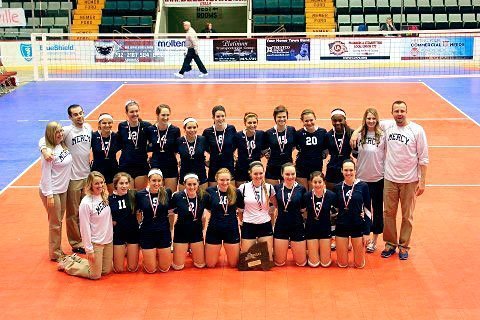 Meanwhile, being the best in all of New York is a pleasantly new feeling for Our Lady of Mercy’s girls.

Both squads emerged with state titles on Nov. 18, thanks to outstanding play in their championship matches at the Glens Falls Civic Center.

Mercy has joined the Knights as the state’s elite thanks to a 19-25, 25-19, 25-17, 25-11 comeback win over Baldwinsville in the girls’ Class AA title match. The Monarchs, who finished as state runners-up in Class A last year before moving up to AA for 2012, finished with a 17-1 record and claimed their first-ever state championship.

In the state final against Lindenhurst of Section 11, tournament Most Valuable Player Christy Blough led the way with 10 kills and 15 assists while Chandler Matteson had 16 assists. The state playoffs were expanded beginning in 2010, and thus far McQuaid is the only Division 1 champion, with an undefeated streak that has now spanned more than two years.

McQuaid’s dominance against Lindenhurst — as well as its 5-1 record in that weekend’s pool play that preceded the final — was a departure from its sometimes bumpy road to the state title. In the Nov. 10 quarterfinal against Orchard Park of Section 6, McQuaid prevailed in a closely contested affair, winning 25-22, 25-21, 22-25, 25-23.

After dropping the first set 19-25 to Baldwinsville of Section 3, it appeared that Mercy might be headed for the same fate as last year’s state runner-up squad. But from there, the Monarchs built up a head of steam to sweep the last three sets in the best-of-five final, led by tourney Most Valuable Player Terese Cannon who finished with 13 kills and 12 digs against the previously undefeated Bees.

Mercy had reached the final by posting a 5-1 record in pool play one day earlier. The Monarchs’ trip to the state final four was made possible by a quarterfinal victory over Orchard Park on Nov. 10, as they won 25-19, 25-22, 25-20 behind 18 kills and eight digs from Cannon and 10 kills each from Emily Costello and Ashley Fallone while Madi Wickens had 25 assists.

Mercy, despite finishing as the state’s best, wasn’t even the No. 1 seed in its own sectional tournament. However, the second-seeded Monarchs were at the top of their game in the Section 5 Class AA final against top-seeded Penfield on Nov. 3, winning by scores of 25-20, 25-17 and 25-15. Penfield was the defending state champ, carrying a 35-match winning streak into the title match.

The team was buoyed throughout the season by the return of Emma Falk, a senior setter who missed all of 2011 while battling leukemia but returned healthy in 2012 to play a key role in the Monarchs’ state-title run.

This story was updated on Nov. 20, 2012, due to erroneous information provided by the official NYSPHSAA website in regard to some of McQuaid’s state-tournament scores.