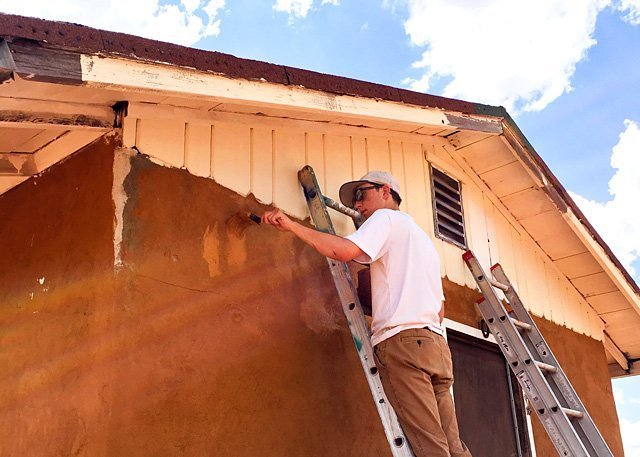 Will Scheverman, a senior at McQuaid Jesuit, paints the exterior of a home near Wide Ruins, Ariz., July 23.

"She was the sweetest woman I’ll ever meet," recalled Connor, who helped make repairs to the woman’s home. "She was happy for the help and did not care that it (the assistance) wasn’t going to last."

Connor and 11 fellow seniors from McQuaid Jesuit High School, along with Principal Adam Baber and theology teacher Elizabeth Pietropaoli, spoke to the Catholic Courier Aug. 18 about their trip to the Navajo Nation in late July, where they volunteered with Saint Anne Mission in the Diocese of Gallup, Ariz. The mission church serves the Klagetoh, Wide Ruins and Cornfields communities on the Navajo Reservation. 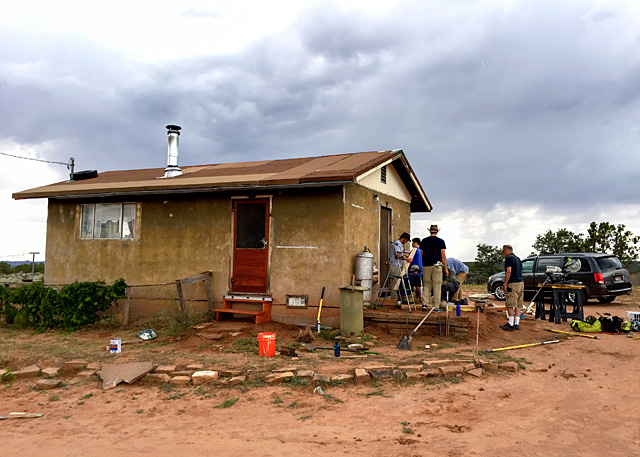 When the McQuaid students arrived, they were surprised by just how much need there was in the area.

"We were expecting it to be poor and impoverished, but to see how deep it was and how they managed to live with that deep poverty, just struck me, personally, really hard," said Nicholas Cottrell, 17.

"The level of poverty wasn’t what we expected at all," agreed Martin Petrauskas, 17.

Over the 10 days, the students did mostly manual labor, such as pulling out carpets, painting houses, installing windows and pouring cement at different homes on the reservation. They also installed a new handicap-accessible ramp at the home of a wheelchair-bound woman.

"They were so thankful for what we were doing," Connor said of the residents’ gratitude for their work. "Throughout the day, they kept getting water for us, which we think was a small thing, but out there, with little access to water, it is a huge thing."

In addition to the construction work, the students had the opportunity to interact with some of the people on the reservation, including the young children. The students said they played basketball with some of the teens outside the mission church and took some of the children to a nearby creek to cool off in the water.

"He and I started playing basketball. Then we started walking around and he wanted to get on my shoulders," he recalled. "So he got up there and we walked around. We saw wild horses together. It was awesome."

Pietropaoli was impressed with how quickly her students formed relationships with youths and adults alike.

"I was amazed how quickly the students entered into the experience. They befriended people and were really present (in the experience)," she said. "It was gratifying to see their willingness to engage in the opportunities before them."

The young men said the trip taught them a lot about themselves and their ability to assist and serve people in need. They said the experience also helped them to appreciate all the blessings that they have and reminded them to not take things for granted, especially their faith.

For example, Nicholas said he noticed that the Navajo people view practicing their faith as a luxury, because they have such impediments to Mass attendance as the long distance to get to church and the need to take care of responsibilities necessary to maintaining their way of life on the reservation, like tending to sheep and cattle.

"I don’t have to think about going to church. If I want to go to church, I can just get in the car and go," Nicholas said. "At the reservation, they couldn’t do that."

Connor said he learned something similar with Ella, who had missed Mass that week because she had to go get water.

"We would never think of that. We would be like, ‘Oh I can do that later,’" he said. "She had to do that (get water). She had to miss out on one of the things (going to Mass) that is the highlight of her week."

The young men all agreed they were happy to have had these and other experiences during the trip and for the opportunity to serve the people of the Navajo Nation.

"I wish I could have stayed longer," Martin said.

"I wanted to stay there forever," Sutton added.