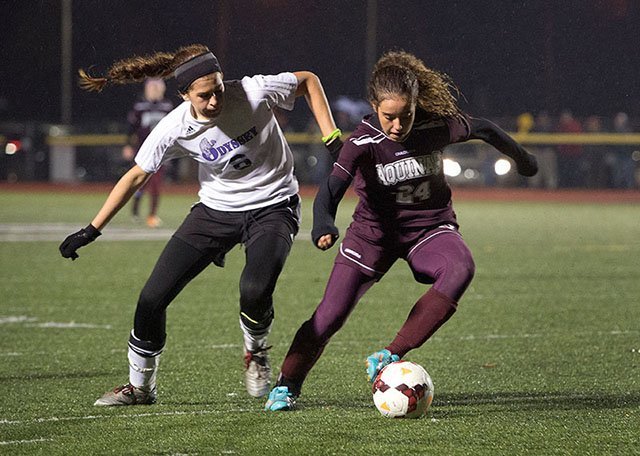 Aquinas senior Francesca Visca handles the ball during the second overtime period of the Section V Class B Championship Oct. 31 at Caledonia-Mumford Central School in Caledonia.

Strong state-tournament performances came from the McQuaid Jesuit boys’ volleyball team, which reached the NYSPHSAA title match; and Aquinas Institute girls’ soccer, which made the state semifinal round.

Meanwhile, the Aquinas girls made the state Final Four with a 2-0 win over Falconer of Section 6 in state quarterfinal play Nov. 8 as Lauren Begy and Adrianna Russell scored for AQ. Begy and Russell were again the goal-scorers in the state semifinal game, played Nov. 15 against Port Jefferson of Section 11, as the teams battled to a 2-2 tie. However, the Little Irish were then defeated on penalty kicks, 3-2, as their season ended with a 14-6-2 record. Earlier this fall, fourth-seeded Aquinas earned the Section 5 Class B cochampionship, playing second-seeded Greece Odyssey to a 1-1 tie Oct. 31 and then winning 4-2 on penalty kicks to advance to state play.