Meet some angels of the Bible - Catholic Courier 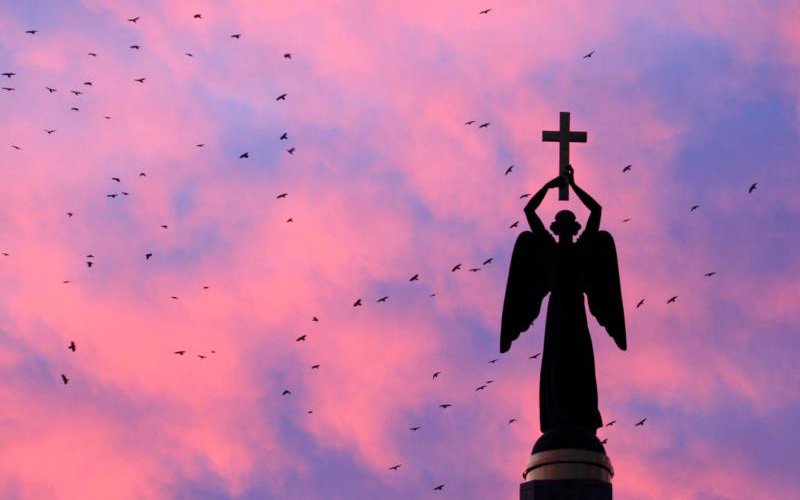 Birds fly near a statue of an angel holding a cross, the symbol of the city, at sunset in Stavropol, Russia, Nov. 5. (CNS photo by Eduard Korniyenko/Reuters)

“In my old age ‘angels,’ as I call them, have come to me,” a 95-year-old woman named Erminia told Pope Francis during his March 2015 visit to Naples, Italy. Her angels included “young and not-so-young people,” she explained. They “help me, visit me, support me in my daily struggles.”

Erminia found herself “alone, increasingly fragile and in need of help” after her husband died. But she encountered a Christian community “where affection and gratuity are lived” and where her angels brought her “strength and courage.”

Why did Erminia think those aiding her resembled angels in their generous friendship? Possibly she just found them God-like. Psalm 91 speaks of angels God sends to guard people. “With their hands they shall support you, lest you strike your foot against a stone,” it confidently states (11-12).

Did Erminia welcome her angels because they so hospitably welcomed her, not considering her age an obstacle? Hospitality, a virtue often judged especially timely today, is linked in Scripture at one point with an incident involving angels.

Abraham’s hospitality prompted the author of the New Testament Letter to the Hebrews to advise early Christians not to “neglect hospitality, for through it some have unknowingly entertained angels” (13:2).

Angels appear in Scripture a remarkable number of times, good angels who remain close to God and some bad angels, whom Scripture says warred against God (Rv 12:7-9).

Sometimes Scripture’s angels keep silent; only their actions are witnessed. Other times angels announce tremendous news. Typically, Scripture’s angels bear some kind of message. Scholars observe that the Greek and Hebrew roots of our word “angel” signify a messenger of God.

In Luke’s Gospel the angel Gabriel delivered astonishing news to Mary, an as-yet-unmarried young woman. “Behold, you will conceive in your womb and bear a son, and you shall name him Jesus.” Indeed, “of his kingdom there will be no end,” Gabriel told Mary (1:31, 33).

When Mary asked how this could be, the angel replied, “The Holy Spirit will come upon you, and the power of the Most High will overshadow you” (35).

Where will you find angels in Scripture? Think of the time after Jesus’ resurrection when the apostles were jailed in Jerusalem. “The angel of the Lord” came at night, unlocked the doors and led the apostles out, according to the Acts of the Apostles 5:19.

Also, as St. Paul sailed toward Italy, aiming to bring the Gospel to Rome, a fearsome storm arose at sea, threatening all on board. Nonetheless, Paul urged everyone to keep their courage, saying:

“Last night an angel of the God to whom (I) belong ‚Ä¶ stood by me and said, ‘Do not be afraid, Paul. You are destined to stand before Caesar.'” What’s more, “God has granted safety to all who are sailing with you” (Acts 27:22-24).

Sometimes an angel spells out a great event’s meaning. This happened the first Christmas.

Announcing Jesus’ birth to shepherds “keeping the night watch” (Lk 2:8), an angel clarified the new child’s identity. He is, the angel explained, “a savior” and “Messiah and Lord” (2:11).

Then, suddenly, that angel was joined by many, by “a multitude of the heavenly host,” that is (2:13).

Angels are on hand at key moments that illuminate the connection between divine and human life. Pope Francis suggested as much in a July 8, 2019, homily.

He recalled the angels of Genesis 28, who appeared in a memorable dream the patriarch Jacob had.

If you’ve heard of “Jacob’s ladder,” you know something about Jacob’s dream. The New American Bible insists, though, that the term “ladder” be translated instead as “stairway.”

In Jacob’s dream “a stairway rested on the ground,” its top reaching toward the heavens. “God’s angels were going up and down” it (28:12).

Awakening, Jacob declared this place “the gateway to heaven” (28:17).

The angels on Jacob’s staircase were unheard. But with them was “the God of Abraham” and “of Isaac,” Jacob’s grandfather and father (28:13).

“In you and your descendants all the families of the earth will find blessing,” God promised in the dream (28:14).

Since the angels on Jacob’s staircase moved “up and down” it, they were not ascending only out of this world. The staircase “represents the connection between the divine and the human,” Pope Francis affirmed.

He delivered his homily on the sixth anniversary of his 2013 visit to Lampedusa, a southern Mediterranean island. His hope there had been to alert the world to the tragedy of countless, desperate migrants who drowned while attempting a voyage in unsafe or overcrowded crafts from African coasts to European shores.

Climbing Jacob’s staircase “requires commitment, effort and grace. The weakest and most vulnerable must be helped,” said the pope.

He connected Jacob’s staircase with the life of the world to come, yes, but with faith’s expression in this world too.

“I like to think,” he said, “that we could be those angels ascending and descending, taking under our wings the little ones, the lame, the sick, those excluded,” who otherwise might never experience “in this life anything of heaven’s brightness.”
– – –
(Gibson served on Catholic News Service’s editorial staff for 37 years.)