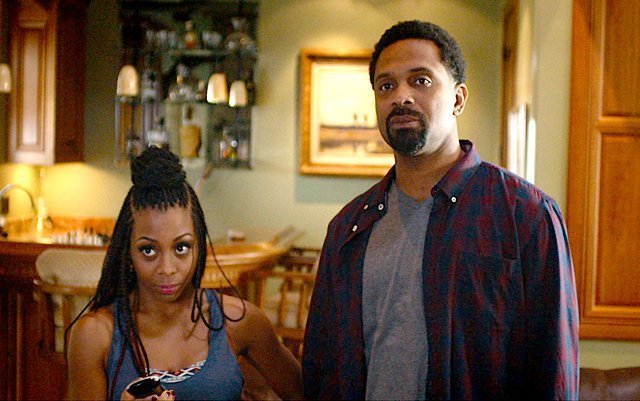 Bresha Webb and Mike Epps star in a scene from the movie "Meet the Blacks." The Catholic News Service classification is O -- morally offensive. The Motion Picture Association of America rating is R -- restricted. Under 17 requires accompanying parent or adult guardian.

NEW YORK (CNS) — "Meet the Blacks" (Freestyle) is a close encounter of the most unpleasant kind.

A sloppy assemblage of tasteless jokes, rampant profanity and lewd sexual behavior does not a comedy make. Director Deon Taylor, who also wrote the screenplay with Nicole DeMasi, aims low and, not surprisingly, "Meet the Blacks" winds up in the gutter.

But what a comfortable gutter is it: Beverly Hills, California, where the eponymous African-American clan, formerly based in Chicago, relocates to an all-white gated community.

Patriarch Carl (Mike Epps) hopes for a better life for his family. Unbeknownst to them, he is also running away from a string of creditors, drug dealers and spurned lovers in the Windy City.

Then there’s the matter of the so-called "purge." In a comic take on the horror franchise that kicked off with 2013’s "The Purge," on one day of the year, for a single 12-hour period, any crime may be committed with impunity: burglary, arson, murder — you name it.

Carl is convinced that a wealthy place like Beverly Hills is purge-proof, even if his neighbors are not very welcoming.

For a while, the life of luxury suits Carl’s hot new Latina wife, Lorena (Zulay Henao), and his disrespectful kids, Allie (Bresha Webb) and Carl Jr. (Alex Henderson). His crazy cousin, Cronut (Lil Duval), just sprung from prison, provides "comic" relief in the form of lust for Lorena and pot-smoking.

But the day of licensed anarchy approaches, and the U.S. president, El Bama (George Lopez), appears on TV, warning his fellow Americans to take precautions. It’s not long before the Black family is under siege from gun-toting neighbors and Carl’s angry creditors, who include ex-boxer Mike Tyson in a clown mask.

"Meet the Blacks" descends from a comic mess into a gory one. Amid the movie’s own increasingly obvious desperation, a last-minute appeal by Lorena to the Virgin Mary registers as just one more shake of its molting tail feathers for this tainted turkey.