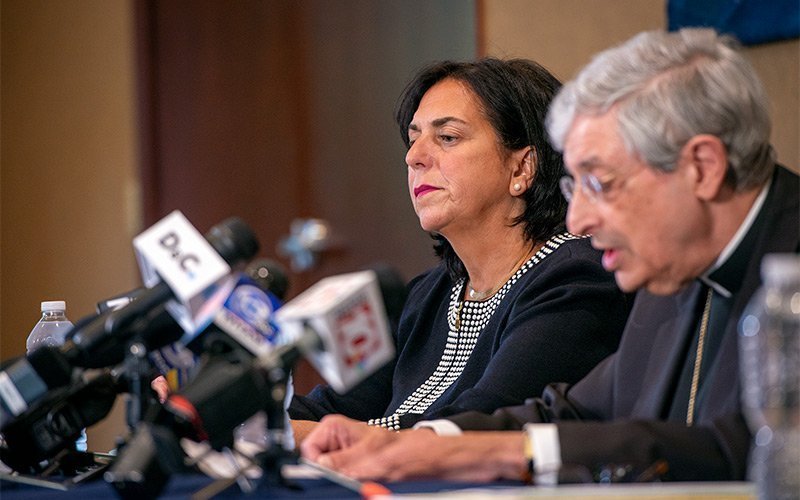 ROCHESTER — A wide-ranging series of questions — mostly concerning what assets the Diocese of Rochester has available to pay creditors who had filed sexual-abuse lawsuits against it — took up most of a five-hour Oct. 10 bankruptcy meeting between creditors and diocesan officials.

Bishop Matano and Passero both spoke under oath. They, along with Donato, fielded numerous questions from Schmitt as well as members of an unsecured creditors’ committee and attorneys for some of the committee members.

About midway through the meeting, Bishop Matano diverged from answering questions in order to offer a message to the sexual-abuse victims, expressing “my sorrow and apology for all that the survivors have endured.” The bishop went on to state that his concern in the bankruptcy process goes beyond financial matters, also extending to the personal welfare of those involved.

“I am also charged with repairing the spiritual damage,” he said.

During the bankruptcy process, committee members will speak on behalf of all abuse claimants and offer input on how the diocese might compensate victims.

Many questions at the Oct. 10 meeting sought details about the assets of the Rochester Diocese — including buildings, other properties, insurance policies and bequests — that potentially could be used to pay abuse victims.

Passero said the diocese has approximately $68 million in assets and more than $100 million in liabilities, primarily related to CVA lawsuits.

Asked by Schmitt how soon the diocese intends to file its formal reorganization plan, Passero replied “as soon as possible,” adding that the diocese hopes to do so sometime in 2020.

Rochester is the first diocese or archdiocese in New York state to file for Chapter 11 protection. Bishop Matano opted for this measure in light of numerous claims of clergy sexual-abuse brought against the diocese beginning Aug. 14, when the Child Victims Act opened a one-year filing window for sex-abuse claims that previously had been barred by statutes of limitations.

In a Sept. 12 letter to the faithful, Bishop Matano said filing for reorganization was “a very difficult and painful decision. But after assessing all reasonable possibilities to satisfy the claims, reorganization is considered the best and fairest course of action for the victims and for the well-being of the Diocese, its parishes, agencies and institutions. We believe this is the only way we can provide just compensation for all who suffered the egregious sin of sexual abuse, while ensuring the continued commitment of the Diocese to the mission of Christ.”

Tags: Diocesan Bankruptcy Updates
Copyright © 2023 Rochester Catholic Press Association, Inc. All rights reserved. Linking is encouraged, but republishing or redistributing, including by framing or similar means, without the publisher's prior written permission is prohibited.