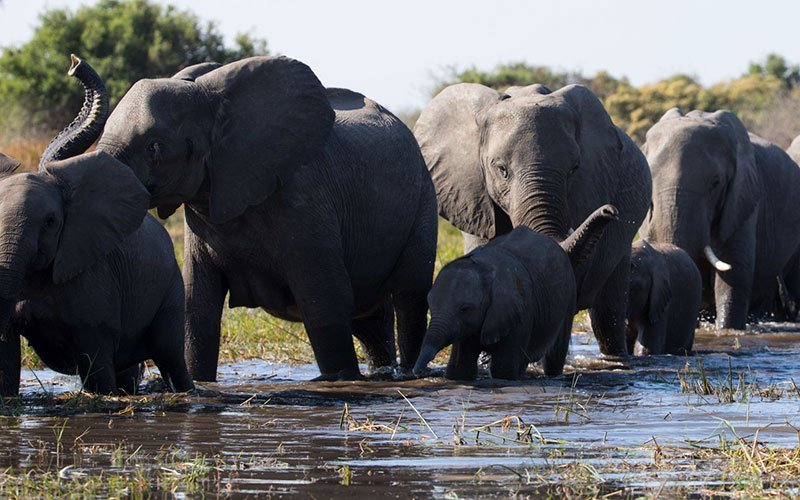 NEW YORK (CNS) — Adjusting to her new non-royal life and returning to her entertainment roots, Meghan Markle, aka the Duchess of Sussex, narrates “Elephant.” The charming, delightful 90-minute documentary streams now on Disney+.

Mark Linfield and Vanessa Berlowitz directed the film, which Linfield and David Fowler wrote. Parents may need to guide younger children through the deaths and predatory animal behavior depicted. But “Elephant” is free of anything objectionable and thus suitable for all ages.

Markle’s warm and enthusiastic storytelling will appeal to viewers as they follow a herd of Kalahari elephants on their annual migration across 350,000 square miles of southern African desert. These pachyderms “spend most of the year searching for food and water,” she tells us.

To emphasize a diversity of experiences and perspectives, the documentarians highlight three elephants’ stories. After her sister, 50-year-old Gaia, four-decade-old Shani, we learn, is “the oldest and wisest” member of the herd. Shani must constantly keep an eye on her 1-year-old son Jomo, who’s “a handful.”

As the group’s matriarch, Gaia “is a force to be reckoned with and a powerful role model for the entire herd.” Where “she leads, the herd will follow.”

The pack’s journey begins at an “especially joyous season” in the Okavango Delta. That’s because, as viewers later find out, water travels 600 miles and drains into the delta, creating an oasis in one of the more arid locations on the entire planet.

When this evanescent paradise reverts to dust, Gaia instinctually leads her fold to the Zambezi River. As the filmmakers note, these are the “last animals on earth still able to make these epic migrations.” And they need to “roam vast distances to survive.” Two months pass before the herd drinks water again.

They find food and shelter at an island near the Zambezi. But, as with much of their journey, reaching there is perilous. Navigating the river’s “ferocious current,” moreover, involves the risk of being propelled over a nearby tourist attraction, the spectacularly beautiful — yet, for the elephants, potentially deadly — Victoria Falls.

The return trip to the delta is still more fraught. With the water flowing back to the Okavango more rapidly than usual, Gaia intuits that her charges must take the most direct path back, which puts them in increased danger from attack by lions. The ordinarily rambunctious and fearless Jomo is especially vulnerable.

Martyn Colbeck  and Mike Holding’s astonishingly intimate cinematography immerses the audience into the world they capture. And viewers will likely come to identify with the majestic animals on screen as if they were old friends.

Thus they will revel with the elephants as they swim in the delta, and Jomo’s antics will raise a smile. “Elephant” also has its touching moments, as when Gaia patiently frees a young calf drowning in mud. And the demise of one of the herd from hunger and stress will probably move viewers deeply.

The documentary is educational as well as emotionally engaging. Elephants, we’re informed, are social animals, for whom “family is everything.” They can eat 600 pounds of leaves daily — the equivalent, according to the filmmakers, of 2,500 cheeseburgers. Layers of mud on the animals’ hides serves as sunscreen. And their gestation period lasts two years.

With families remaining indoors to stop the spread of disease, parents looking for programming that can be enjoyed across the generations will find that “Elephant” — at once diverting, edifying and poignant — fits the bill.