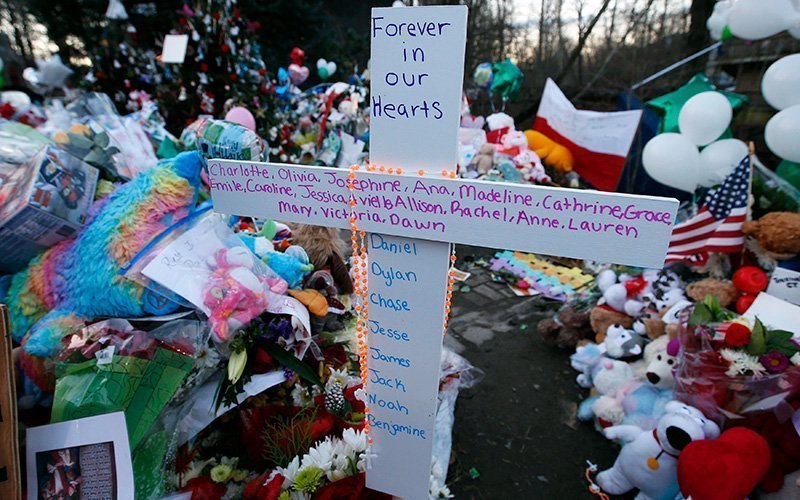 A cross bearing the first names of the victims of the Dec. 14, 2012, shootings at Sandy Hook Elementary School is pictured amid hundreds of other items left by mourners at a memorial in Newtown, Conn., Dec. 19, 2012. (CNS photo by Mike Segar, Reuters)

“We gather for the eighth time this night to remember one of the most horrific events in this community, and certainly in this country and even our world,” said Msgr. Robert Weiss, pastor of St. Rose of Lima Church in Newtown.

He reminded parishioners they made a pledge that day to never forget what happened and to “hold these 26 in prayer and thought, as well as their families. So once again, tonight, we gather to remember.”

With in-person attendance limited due to COVID-19 restrictions, most mourners participated in the solemn remembrance online. Some of the young people at the Mass were family members and classmates of those who lost their lives in 2012.

Msgr. Weiss read the names of each of the students and teachers as a bell tolled and students brought an ornament down the aisle of the church to be placed on a Christmas tree by the altar.

“Certainly, this pandemic has changed so much in our lives,” the priest said. “Normally, the church would be full on a night like this, with people so deeply touched by this tragedy. And yet, even though the physical presence is not here, we know that their hearts and their prayers are, and so we gather as a community once again … praying for healing, for hope and for the strength and peace we need.”

Fittingly, Deacon Mike Ronan read from the Gospel of Mark: “Let the children come to me.”

Msgr. Weiss recalled that eight years ago the church filled to capacity and there were more than 2,000 people standing outside.

“People just needed to be somewhere, needed to be together, trying to understand, show support, lift up spirits,” he said. “Even though it was dark, so many candles were lit that the darkness was being dispelled rather quickly, and we were holding on to whatever hope we thought we had left.”

“But it didn’t make the change,” Msgr. Weiss said. “It changed the hearts and minds of some. But as we look at the headlines the past few days, and they give out numbers that are astronomical of the people who continue to die at the hands of gun violence every day in this country, in this state, we have to ask ourselves what are we to do, how do we bring about that change that we so desperately need?”

The priest addressed the students gathered, saying that he remembered so many of them from years ago.

“It was a difficult and challenging time,” he said, “but it was a time to grow closer together and to open our hearts and minds to what really matters — and that’s the preciousness of the gift of life, and that we need to work endlessly and tirelessly to protect that gift. No innocent person deserves to have their life taken from them, especially children.”

He said eight years later the community finds itself “still fighting for the same cause, still holding on to the same hope, still trying to understand and opening our hearts as much as we can on a day like this to families whose lives continue to be broken.”

Clyons writes for the Fairfield County Catholic, monthly newspaper of Diocese of Bridgeport.