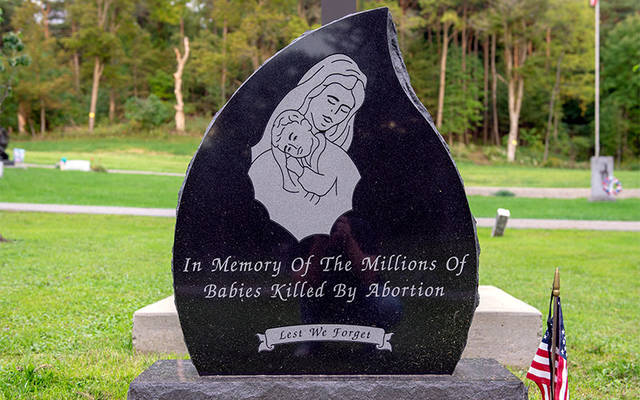 A memorial recalling the unborn — made possible by the Knights of Columbus and other pro-life advocates — was dedicated at Holy Cross Cemetery in Dansville in 2016. (Courier photo by Jeff Witherow)

IRONDEQUOIT — It’s hard to miss the Memorial to the Unborn on the grounds of St. Thomas the Apostle Church.

Adorned by handsome landscaping, it features a large Infant of Prague statue bearing the inscription “In Memory of the Unborn, ” an eternal flame atop a pole containing the words “Pray for the Unborn, ” and a brick walkway leading up to the display.

According to Art Harris, the memorial is designed to spur people toward reflection and action on behalf of unborn babies facing the threat of abortion.

“I truly feel that once people go and see this, it gives them the feeling that (abortion) isn’t right,” said Harris, who served as project cochair for the memorial, which was dedicated in 1997.

The impetus to create a Memorial to the Unborn in Irondequoit — as well as many similar memorials in the Diocese of Rochester — stemmed from a homily given by Cardinal John O’Connor during a 1992 Mass for the Knights of Columbus Supreme Council, the Knights’ governing body. The late prelate from the Archdiocese of New York challenged Knights to erect memorials in each diocese, saying he was profoundly affected by a visit earlier that year to the Tomb of the Unborn Child at Franciscan University of Steubenville.

“Councils all over the world picked up on the movement,” recalled Harris, who has held several Knights of Columbus administrative roles at the diocesan, state and international levels, and is now an adviser for Rochester-area councils.

Harris said memorials recalling the unborn — made possible by the Knights of Columbus and other pro-life advocates — exist at more than 20 churches and cemeteries in the Diocese of Rochester. They include recently erected memorials at Greece’s St. Mark Church, dedicated in November 2017; and Holy Cross Cemetery in Dansville, dedicated in October 2016.

Vada Holmes, a parishioner of Holy Family Catholic Community, noted that the memorial in Dansville is a combined effort of Knights of Columbus Council 11538 — to which her husband, Wayne, belongs — as well as the Knights’ Ladies Auxiliary and private donors. Other memorials for the unborn located at Catholic cemeteries are in Webster, at Holy Trinity Cemetery; in Canandaigua, at Calvary Cemetery; in Elmira, at Ss. Peter and Paul Cemetery; and in Penn Yan, at St. Michael Cemetery. And in Ithaca, the monument at the former Immaculate Conception School is in the process of being moved to Calvary Cemetery because the school property is being sold, according to Peter Romani, past grand knight of Council 277.

Church-based memorials include the one at St. Thomas the Apostle, an initiative of the Knights of Columbus; and at St. Mark, which was a parish undertaking. Other memorials to the unborn are located at Nativity of the Blessed Virgin Mary Church, Brockport; Holy Ghost and St. Jude, both in Gates; St. Mary, Waterloo; St. Ann, Hornell; Immaculate Heart of Mary, Painted Post; St. Leo, Hilton; and St. Michael, Newark.

Several of the memorials bear stirring messages, such as Dansville’s “In memory of the millions of babies killed by abortion, lest we forget.” The St. Thomas the Apostle memorial quotes Isaiah 49:15 — “Can a mother be without tenderness for the child of her womb? Even should she forget I will never forget you.” And the memorial in Painted Post invokes Jeremiah 1:5 — “Before I formed thee in the womb I knew thee; and before thou camest forth out of the womb I sanctified thee, and I ordained thee a prophet unto the nations.” Meanwhile, St. Mark’s memorial is wordless yet powerful: a statue of an infant lying on eagle’s wings.

In addition to remembering unborn babies, Holmes noted that a memorial to the unborn can help raise awareness about abortion and also bring healing for people who have had abortions and regret them.

The memorials are among several pro-life efforts involving the Knights of Columbus; others include purchasing ultrasound machines for pregnancy centers and taking part in the annual March for Life in Washington, D.C.

“We want to keep in the forefront that we’re supporting life from creation right through the end of life,” said Jeff Gelinas, grand knight of Canandaigua Council 1445.