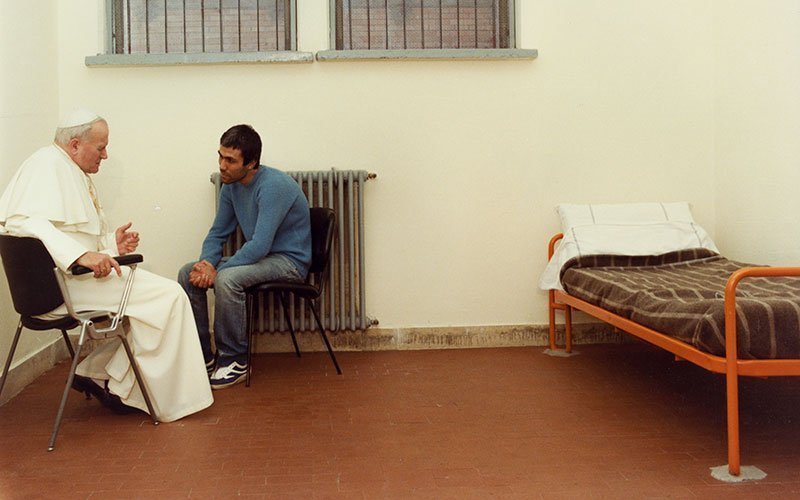 I write of him as the centennial of his birth May 18, 1920, approaches. It would be impossible to list all my lasting memories of him in one article. So that is not my goal.

The more than 26-year papacy that commenced with St. John Paul’s election Oct. 16, 1978, meant he would become one compelling point of focus during more than two-thirds of my own long career as an editor in the Catholic press.

Do you have special memories of the Polish pope? If only we could speak together about them!

Is an image worth a thousand words? If so, I suspect that images of St. John Paul kneeling to kiss the earth as he arrived in each new nation he visited as pope have created a memory shared by many. The gesture was intended to make respect for the peoples of the world visible.

Many around the world apprehensively awaited progress reports during his three-week stay in Rome’s Gemelli Hospital. The tragic shooting shook people to the core.

Indeed, however, his recovery progressed. Some 24 more years as pope lay ahead.

If his shooting proved unforgettable, think back also to what followed. St. John Paul forgave Agca from the beginning. Then, in 1983 he visited Agca in Rome’s Rebibbia Prison. It was a visit of kindness, illustrating a basic tenet of Christianity: Forgiveness is powerful.

Later the Vatican would ask Italy’s government to pardon Agca, which it did in the jubilee year 2000.

Another of my key memories of this pope involves his singular dedication to planning. At least insofar as the year 2000 was concerned, he didn’t leave things to chance.

Few, I imagine, felt ready when he was elected in 1978 to begin planning for a new millennium’s arrival more than two decades in the future.

Later, in his 1994 apostolic letter “Tertio Millennio Adveniente” on the advent of the third millennium, he set forth a detailed, three-year plan of preparations for the coming of the year 2000.

“Everyone is asked to do as much as possible to ensure that the great challenge of the year 2000 is not overlooked,” he wrote. When the year 2000 concluded, he acknowledged in a Jan. 6, 2001, apostolic letter “Novo Millennio Ineunte” (“At the Beginning of the New Millennium”), that “from the beginning of my pontificate, my thoughts had been on this holy year 2000” (2).

Allow me to share one more memory of St. John Paul. It relates to his friendship with St. Teresa of Kolkata, still known to many as Mother Teresa. Some six years after her 1997 death he declared her “blessed.”

The pope’s remarks during her Oct. 19, 2003, beatification seemed to highlight what he found so inspiring about this friend, whose dedication to the poor was recognized worldwide. He called her “an icon of the good Samaritan.”

She “went everywhere” serving “Christ in the poorest of the poor,” he noted. “Not even conflict and war could stand in her way.”

St. Teresa, canonized in 2016, “wanted to be a sign of ‘God’s love, God’s presence and God’s compassion,’ and so remind all of the value and dignity of each of God’s children,” the pope observed.

For me the word “dignity” leaps off the page of his beatification text. I felt as his pontificate unfolded that dignity, human dignity, became an important theme for him.

Not that he introduced human dignity to the church’s lexicon, for the call to respect others, even enemies, is basic for Christians. Moreover, the Second Vatican Council, in which he participated as a young Polish bishop, put the term “human dignity” to good use in its 1965 Pastoral Constitution on the Church in the Modern World (“Gaudium et Spes”).

“Everyone must consider his every neighbor without exception as another self, taking into account first of all his life and the means necessary to living it with dignity,” said the pastoral constitution (No. 27).

It dawned on me gradually during his pontificate that he was contributing to making human dignity an essential element in the Catholic conversation not only about other Catholics, but about the human family.

In his December 1988 apostolic exhortation “Christifideles Laici” on “the lay members of Christ’s faithful,” he said:

“To rediscover and make others rediscover the inviolable dignity of every human person makes up an essential task (and), in a certain sense, the central and unifying task of the service which the church, and the lay faithful in her, are called to render to the human family” (No. 37). – – –