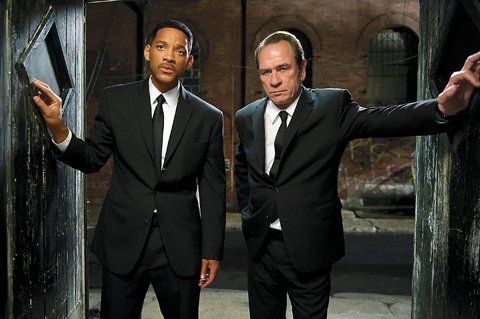 NEW YORK (CNS) — A Chinese saying holds that good things come in pairs, while trifectas we know to be rare by definition. And those guidelines, alas, hold true for "Men in Black 3" (Columbia).

This moderately fun but ultimately forgettable outing for the well-established secret alien crime-fighting duo of Agents J (Will Smith) and K (Tommy Lee Jones) puts itself beyond the pale for younger audiences, moreover, by dabbling in some distasteful language.

Director Barry Sonnenfeld’s slightly tired retread of the comedy franchise — the premise for which derives from Lowell Cunningham’s comic book "The Men in Black" first published in the early 1990s — manages to maintain the humorous spirit of the two previous movies, which he also helmed, but shifts the focus to a younger version of K, played by Josh Brolin.

After the escape of an infamous extraterrestrial villain known as Boris the Animal (Jemaine Clement) from the secret lunar base on which he was being held, J wakes up in an alternate timeline in which his sidekick no longer exists. Boris has mischievously gone back in time, killed K off, prevented his own incarceration, and begun the enslavement of humanity.

As a result, wisecracking J must set the clock back — all the way to 1969 — so that he can dissuade the youthful K from pursuing the course that would eventually lead him to his doom.

Needless to say, this chronology bending makes for some amusing set pieces, including one revolving around the yet-to-be-launched Apollo 11 space mission. A surprisingly poignant ending, by contrast, sheds compassionate light on the origins of the elder Agent K’s habitual grumpiness.

While the proceedings are mostly harmless, at least for mature viewers, they end up providing more chuckles than belly laughs. Like a wan smile, "MIB 3" comes across as rather insipid.

Smith is, undeniably, in his usual top-notch form. But removing the equally excellent Jones for the majority of the picture proves an ill-advised gambit; his presence is greatly missed throughout.

Additionally, screenwriter Etan Cohen’s dialogue makes wholly unnecessary forages into vulgar language and profanity. That’s all the more unfortunate since teens would likely appreciate the antics on screen more than their seasoned seniors.

The film contains frequent action violence, at least two instances of profanity and occasional crude and crass language. The Catholic News Service classification is A-III — adults. The Motion Picture Association of America rating is PG-13 — parents strongly cautioned. Some material may be inappropriate for children under 13.