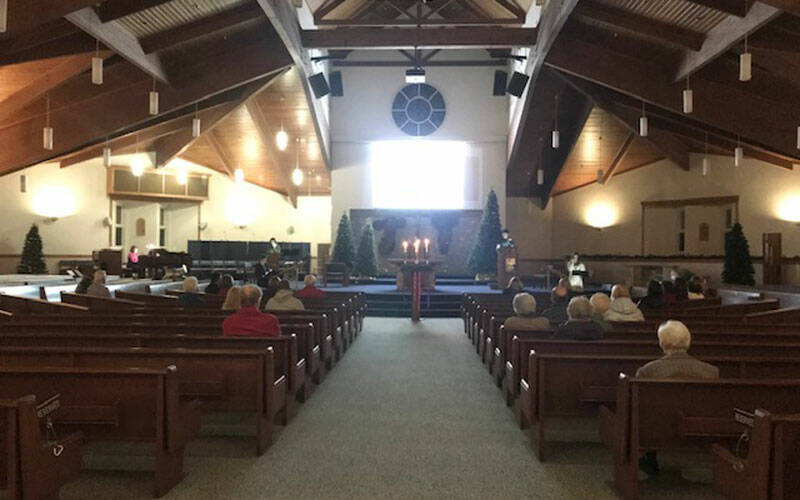 A Stations of the Crib took place Dec. 21 at St. Catherine of Siena Parish in Mendon. (Photo courtesy of Karen Luke)

It was a typical Advent prayer service, a one-night event designed to help parishioners prayerfully prepare to celebrate Christ’s birth. Yet the fruits of this endeavor lasted well past Christmas for Pat and Frank Gacioch.

“We have a 25-minute ride home and we talked about it all the way home, and all the way through the rest of Advent into Christmas,” Pat Gacioch said of the Stations of the Crib prayer service, which took place Dec. 21 at St. Catherine of Siena Parish in Mendon. “I found it to be truly inspirational and one of the nicest and most reflective Advent activities I’ve ever been to.”

The Gaciochs were among about 40 people who attended the event, which was led by members of the parish’s youth group. The prayer service followed the format of the popular Lenten Stations of the Cross, but focused on the events leading up to and immediately after Jesus’ birth rather than his death on the cross, explained Karen Luke, youth minister at St. Catherine of Siena.

Four teens took turns reading Scripture passages from which the various stations were derived, beginning with the angel Gabriel’s visit to Mary to announce her pregnancy.

The music, including a teen on guitar, was led by music director Pam McInerney, who worked with Luke to select a carol to accompany each station. The song for the first station was “Ave Maria,” Luke noted. “Angels We Have Heard On High” accompanied the station recounting the shepherds’ encounter with angels announcing Jesus’ birth, and “Joy To the World” was the meditation song during the station focused on Jesus’ birth.

“It was dark, and that music was incredible. I actually had goosebumps,” Pat Gacioch recalled. “You were going through Mary and Joseph’s journey in a way that I had never broken it apart before. It definitely made you feel the bumps along the road that Mary, Joseph and Jesus had, and how that can relate to your life.”

Gacioch said the Scripture reading about the Annunciation and related reflection questions prompted her to reflect on times in her own life when God had spoken to her. Luke said such reflection is exactly what she had in mind as she penned the reflections and meditation questions.

“The meditation questions can be tailored to what’s happening in the world each year. We don’t have to do the exact same script next year,” Luke said.

One of the reflections, for example, pointed out that Mary and Joseph were strangers in a foreign land, and encouraged participants to consider how they can respond to refugees and immigrants in the United States and in their local communities. Catholics are called to care for their neighbors all year long, not just at Christmastime, Luke noted.

Concern for neighbors “seems to end after Christmas but people still need us, and so I think a lot of the reflection questions were really focused on what else can I do? Because Jesus came and loves us, and because I am a Christian, what else can I do throughout the year?” Luke remarked. “My goal was to kind of raise a different perspective on Christmas, from the hustle and bustle of what society tells us Christmas is to what our faith tells us and why we celebrate Christmas.”

Parishioners seemed to appreciate this reminder of the true meaning of Christmas, and a number approached Luke afterwards to tell her they enjoyed the prayer service and hoped it would become an annual event. Many parishioners — including the Gaciochs — even remained in their seats after the prayer service had ended, absorbing and reflecting on what they’d just seen and heard.

“No one moved for like five minutes. It was just the craziest thing. I think everyone was just savoring the presence of what we had just experienced,” said Luke, who is planning to offer the Stations of the Crib again next Advent. “I would love for this to be something where different youth groups or people from other parishes come to experience it, or maybe in the future make it something where multiple youth are involved from different parishes. The possibilities are endless, and that’s what I’m looking forward to.”