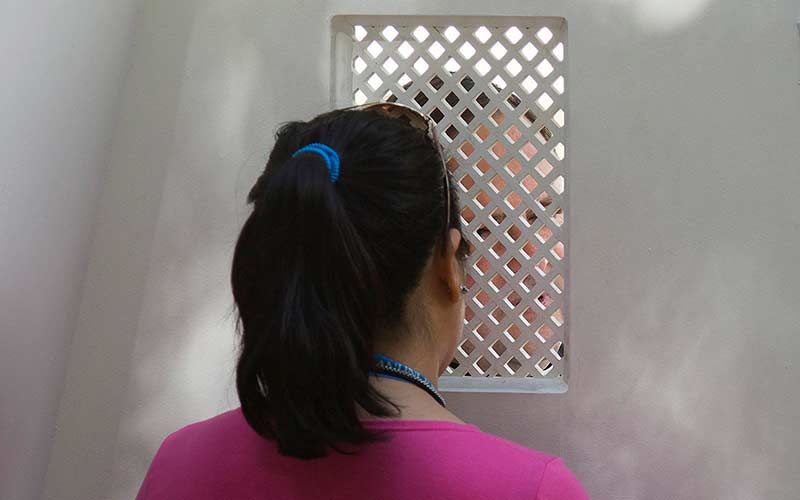 This is the fifth installment in a series on the Eight Beatitudes. This week discusses the fifth beatitude: “Blessed are the merciful, for they will be shown mercy.”

My mom Debbie has a few catchphrases. Maybe your mom had them too? They are those little snippets of well-worn wisdom that are whispered or hollered at us throughout our childhood.

We dismiss them, of course, when we’re younger, because we know everything, but when we’re a little older, we marvel at how they have seeped inside us and come back to us when we need them.

When she was tucking us in at night: “Dream of the angels.”

When we were learning to drive and making a turn for the first time: “Slow with the car, fast with the wheel.”

After my dad said grace: “And thank you for the ability to eat and enjoy.”

But of all the little phrases my mom says, one has stayed with me the most. It has haunted me in dark moments and soothed me in bright ones. This insight has lingered in my spirit through years in the working world, through seminary and now into priesthood. I think about it every day.

My experience in the sacrament of reconciliation, as both a penitent and a confessor, has shown me that mercy is, indeed, getting what you don’t deserve. How many times have I come to the sacrament in shame and disgust only to be absolved and consoled by a patient priest!

“But, Jesus, my sins! Look at them! I have betrayed you yet again! I accept and await your justice.”

To which the Savior always replies: “God, the Father of mercies, through the death and resurrection of his Son, has reconciled the world to himself …”

In my life I have experienced mercies that I do not deserve. I hope you have too.

So what do we do about this? What do we say to a world that, it seems, cares little for either mercy or justice? What does it look like to show mercy to others in real life? Well, it might start by giving people what they don’t deserve.

According to the logic of the world, the rival at work who whispers about you to the boss doesn’t deserve a kind word and a cheerful smile from you. He or she certainly doesn’t deserve prayers and little hidden sacrifices made on their behalf.

Justice would be giving them what they deserve: retaliation, defensive measures, social counterstrikes. Instead, give that co-worker what they don’t deserve.

According to the world’s thinking, the relative who sits at your table at holidays (you know the one who has the exact opposite political and social views as you?) doesn’t deserve to be listened to carefully and responded to thoughtfully.

The world’s mindset demands that they be mocked and gossiped about the instant their car pulls out of the driveway for their failure to have the correct opinion. Instead, give that person who troubles you what they don’t deserve.

In our difficult interactions with difficult people, we are given a choice: We can behave toward them either with what justice seems to demand or what mercy desires to lavish.

The former feels good for a minute but calcifies the divisiveness and hostility of this broken world. The latter is painful because it crucifies the ego but it also opens slits in the fabric of society through which grace might enter.

This is not easy, but neither is being a Christian. Jesus never told us to like everyone, only to love them. Choosing to be merciful is a decision, not a feeling. It’s an act of the will, not the emotions. We don’t have to like people to love them, and the more unlikeable they are, the more specifically we must love them.

Being merciful does not mean we compromise what is properly expected of ourselves, others and the church. Nor it does mean we cease striving to overcome our faults or refrain from speaking the truth in love.

Instead, it means we act toward others in such a way that acknowledges the fact that you and I will stand before Almighty God some day and answer for the lives we have lived.

In that great and terrible moment, I imagine we will be grateful for the times in this life when we gave others what they don’t deserve because the Lord promises that those who show mercy will be given it.

You and I have been redeemed from just punishment through the mercy of a crucified God, not because we deserve it but because we don’t. We don’t deserve a God who humbles himself to take on our humanity, who offers his life for our salvation, who remains with us in the Eucharist.

The prodigal son was right about one thing: “I no longer deserve to be called your son” (Lk 15:19). Neither do we. “Yet so we are” (1 Jn 3:1). Praise God for his unfathomable mercy by which he gives us what we don’t deserve.

(Father Anthony Federico is a priest of the Archdiocese of Hartford, Connecticut.)