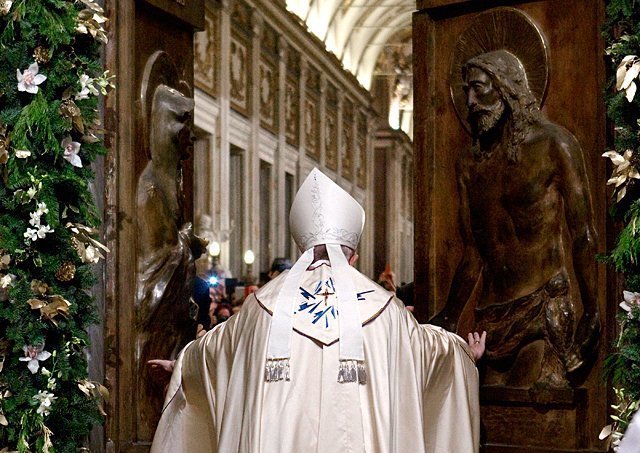 Pope Francis opens the Holy Door before celebrating Mass at the Basilica of St. Mary Major in Rome Jan. 1, 2016. The Holy Doors of Rome's four major basilicas are now open.

VATICAN CITY (CNS) — The gift of mercy is a light that helps Christians reflect on the past year and radiates hope at the start of the new year, Pope Francis said.

While retracing the events of 2015 may recall moments of both joy and sorrow, it also offers a moment to understand the presence of God who "renews and sustains with his help," Pope Francis said during an evening prayer service in St. Peter’s Basilica on New Year’s Eve.

The prayer service included eucharistic adoration and Benediction, as well as the singing of the "Te Deum," a hymn of praise and thanksgiving to God, for the closing year.

The "Te Deum," he said, is the church’s way of giving thanks and recognizing the loving presence of God throughout history.

"With this hymn, we look back at the history of salvation where, through God’s mysterious plan, the various events of our life in this past year find" their place and meaning, the pope said.

Although the past year may bring both happy and painful memories, he said, it also challenges Christians to ponder on whether world events occurred according to God’s will or through people’s plans, which are "often loaded with private interests, an unquenchable thirst for power and gratuitous violence."

The pope said Christians must interpret the signs given by God to truly see his merciful love. Even though the year was marred by violence and the suffering of people fleeing for better living conditions, there were also gestures of goodness, love and solidarity, even if they are not covered by the news.

"These signs of love cannot and should not be obscured by the strength of evil," the pope said. "Good always triumphs, even if in some moments it may seem weaker and hidden."

Addressing those present as the bishop of Rome, the pope called on Romans to move beyond the present difficulties. The city has faced challenging moments as public services such as transportation and maintenance have deteriorated. In October, Ignazio Marino resigned as mayor following accusations that personal expenses were covered through city funds.

Pope Francis encouraged the people of Rome, saying that the commitment of recuperating the fundamental values of service, honesty and solidarity, can "overcome the serious uncertainties that have dominated this year … symptoms of a poor sense of dedication to the common good."

Recalling the Marian icon known as "Salus Populi Romani" (health of the Roman people), the pope invoked Mary’s intercession so that the people of Rome may become "privileged interpreters of faith, hospitality, brotherhood and peace."

Despite the 40-degree temperature — cold for Rome — Pope Francis visited and prayed before the Nativity scene in St. Peter’s Square. He also spent time greeting the crowds gathered, wishing them all a "Happy New Year."