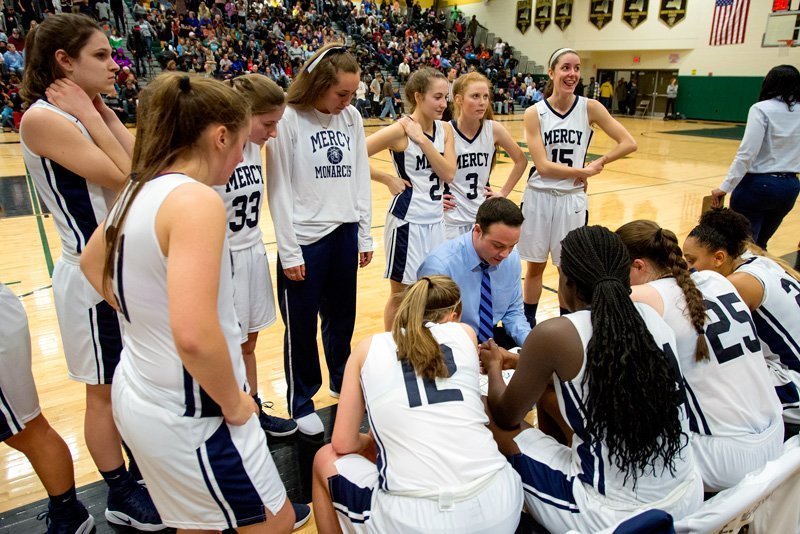 In a classic Section 5 Class AA final March 4, Mercy trailed by 12 points with less than five minutes to go against Bishop Kearney but rallied for a 77-67 win in overtime. Top scorers for the No. 1-seeded Monarchs were Traiva Breedlove with 26 points and Katie Titus with 20. Allure Simmons led sixth-seeded BK with 24 points.

Following its sectional title victory, Mercy won 47-40 over Clarence of Section 6 in state quarterfinal play March 11 as Breedlove scored 17 points. The Monarchs were stopped by Ossining of Section 1, 76-70, in state semifinal action March 17 despite 28 points from Breedlove.

Mercy ended its 2016-17 season with a 21-2 record in reaching the state Final Four for the second straight year.

The Knights’ Noah Williams excelled in season-ending indoor track competition. He won the 55- and 300-meter dashes as well as the long jump at the Section 5 Class A meet Feb. 17, leading his team to a first-place finish.

Williams went on to win the 55 dash and long jump at the Meet of Champions state qualifier Feb. 24, with the Knights’ 800 relay also placing first. Finally, Williams placed second in the 55 and seventh in the long jump at the state-championship meet March 4.

Individual titles also were earned by the ND boys as they finished second in Section 4 Division II Feb. 11. First places came from Matt Connolly in the 3,200, Ji Clark in the weight throw and the 3,200 relay. ND’s Matt Karee went on to place second in the 1,000 run at the state qualifier Feb. 25 and ninth in that event at the state meet March 4.

* Notre Dame boys’ basketball reached the Section 5 Class C final. The Crusaders, seeded fourth, won 63-36 over No. 13 Bainbridge-Guilford Feb. 22 behind 16 points from Dimitrius Stanley, 64-47 over No. 5 Groton Feb. 25 as Derrick Stank had 20 points, and 80-63 over top-seeded Trumansburg in the March 1 semifinal round behind 25 from Stank. In the March 4 title game against No. 2 Moravia, ND fell 39-33 with Gary Raupers’ 12 points leading the Crusaders. Their final record was 17-7.

* McQuaid ice hockey made some postseason noise during retiring Coach Al Vyverberg’s 30th and final season. The Knights entered the Section 5 Class A playoffs with a 9-10-1 record and the No. 8 seed, but won 6-1 over No. 9 Rush-Henrietta Feb. 14 behind two goals and two assists from Brennan Brown before a 2-1 shootout win over top-seeded Penfield Feb. 17 in the quarterfinals as Brown got the deciding shootout goal. McQuaid then lost 2-1 to No. 4 Fairport Feb. 23 in semifinal play. Vyverberg finishes as Section 5’s all-time winningest coach with 400-plus wins and six sectional titles as well as state crowns in 2005 and 2015.

* In boys’ skiing, McQuaid’s Declan Kelly earned a first place in the slalom at the Section 5 Class A Alpine meet Feb. 14. Kelly also finished third in the giant slalom, leading the Knights to a second-place finish in team scoring.

* Aquinas girls’ track got a first-place finish from the 800 relay at the Section 5 Class C meet Feb. 18. Travasia Singletary added a second place in the 300, and also took second in that event at the state qualifier Feb. 24.

* AQ boys’ track got a second from Josh Quatela in the pole vault at the Section 5 Class C meet Feb. 18.

* Aquinas’ Matt Bertolone had the high series of 1,320 at the Section 5 boys’ bowling championships Feb. 14. In Class D, Bishop Kearney’s Tim Ostrander rolled the highest game with a 258.

* Jessa Glaspy of Aquinas threw a 263 at the Section 5 girls’ bowling meet Feb. 15. Competing in Class C, her score was the highest of all sectional classifications. Meanwhile, Kearney’s Heather Flanagan rolled the high game in Class D with a 233.

* Aquinas cheerleading placed second in the Division 2 Small A classification at the Section 5 cheerleading championships Feb. 25.