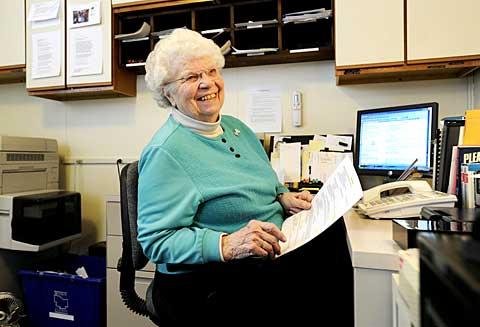 Goldie Rogers says she loves her job at Rochester's Mercy Prayer Center, where she has been a secretary for the past five years.

ROCHESTER — Goldie Rogers had been a school secretary for 32 years when St. John the Evangelist School on Humboldt Street closed in 2005. It wasn’t the first time a school’s closing had left her without a job, but she didn’t let bitterness consume her. Nor did she retire, as many of her coworkers expected.

"I allowed myself a second or two (for a) pity party, and then I said, ‘Let’s get going,’" Rogers recently told the Catholic Courier. "I knew I didn’t want to retire. I feel I have something to offer."

Rogers immediately went to the Diocese of Rochester’s job postings, where the very last one on the list was for Rochester’s Mercy Prayer Center, which was seeking a new secretary. She’d been to retreats at the prayer center and liked its atmosphere, so she applied for the job.

"I did get offered the job and accepted. School ended at the end of June and I started here in early July," said Rogers, 83.

Rogers has been working at Mercy Prayer Center ever since, and loving every minute of it, she reported.

"I so enjoy what I do, and we’re fulfilling a great need. (The prayer center) is a gem, it really is, and the staff is just a delight to work with," said Rogers, who belongs to Peace of Christ Parish in Rochester.

Rogers’ coworkers are equally delighted to work with her, according to Anne Marie Husser, bookkeeper at the prayer center.

"She’s a gold mine. It’s such a treat working with her," Husser said.

"Every day she wants to learn something new. I love working with her. She is like a walking angel," Husser said.

Rogers, for her part, doesn’t consider herself to be extraordinary. She gives her best effort and complete attention to every task she tackles, she said, and welcomes challenges and believes that learning something new makes a day successful. She noted that this philosophy was helpful when she joined the Mercy Prayer Center staff.

"I did not feel I was as skilled in the computer skills as I would need to be, but I was very willing to go to school," she recalled.

Rogers brushed up on her computer skills and now is very proud of the flyers she creates and the other computer-related tasks she completes. Interacting with people, however, is one of her favorite parts of the job. For Rogers, answering the phone and opening the door for visitors are not mundane tasks. Instead, she views them as opportunities to make a difference in people’s lives.

"Hospitality is first," she said. "You have to greet each person as if they are the most important person, and they are. That first welcome can change your whole outlook, not just for the day, but maybe for the whole week."

Her personal life has been challenging, too, but Rogers said she still feels blessed.

"I’ve had sad things in my life. My husband dropped dead at 43, I lost a son to cancer, but God has been so good. People should count their blessings, because everyone has a blessing of some sort," she said.

One of Rogers’ blessings, she said, is her 104-year-old mother, who lives at St. John’s Home in Rochester. Rogers and her mother are fast friends and play cards three times a week, and her mother usually wins, she remarked.

Rogers said she hopes she’s inherited her mother’s good genes, as she has no intention of retiring from Mercy Prayer Center anytime soon. Most of Rogers’ friends have long since retired, but Rogers said she’s exactly where she wants to be.

"This is a dream ministry, really, because I really love the work and the time just flies by, and there’s always different challenges," she said. "I feel badly for people who get up in the morning and dread going to work, and spend the day just hoping that the hours pass by quickly. What a sad way to live."

Rogers said she loves Mercy Prayer Center’s warm, loving, and genuine environment and staff as much as she loves the faithful people — Catholics and non-Catholics alike — who come to the prayer center in search of peace, solitude or quiet time for prayer.