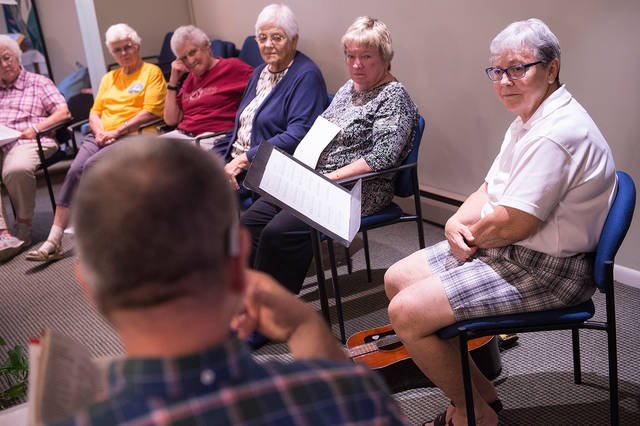 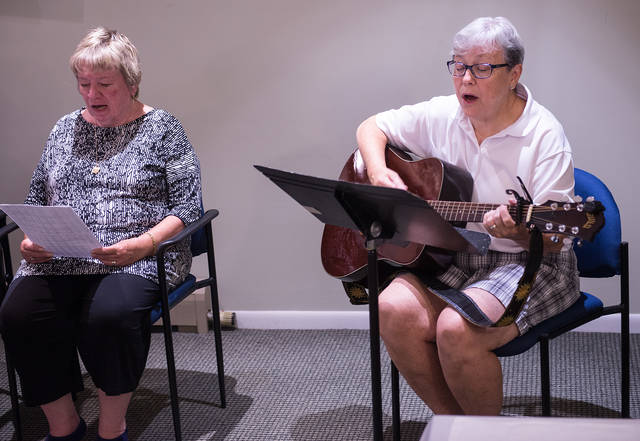 Sister Jody Kearney plays the guitar during a retreat at Mercy Spirituality Center in Rochester on Aug. 7. (Courier photo by John Haeger)

ROCHESTER — “When they walk through the door, they feel like they are home.”

Sister of Mercy Jody Kearney says she often hears this comment from people who visit the Mercy Spirituality Center. A ministry of the Sisters of Mercy, the center has provided spiritual growth and a place of rest and reflection for people of all faiths for the past 40 years.

Known previously as the Mercy Prayer Center, Mercy Spirituality Center was started in July 1978 by Sisters of Mercy Maureen Flood, Virginia Wilson, Mercy Basler and Margaret Mary Mattle, who were looking to provide a ministry to help people develop their relationship with God.

“We always say it started with four women and a dream,” laughed Sister Kearney, who has been part of Mercy Spirituality Center for more than 30 years.

The ministry was originally housed in the convent at Holy Cross Church in the Charlotte section of Rochester, where the four sisters lived. The center was designed to strengthen people’s spirituality and train them to become lay leaders in their own parishes, Sister Kearney said. As the ministry grew, the center moved in 1987 to its current location at 65 Highland Ave. near Highland Park.

“When the sisters were looking for a place to move to, they wanted a place that was on a bus line, so that people from all areas can come (to Mercy Spirituality Center). That was important,” Sister Kearney explained.

The one-acre property offers private guest rooms, meeting spaces, kitchen facilities and a library, and provides a range of programs and retreats that change yearly, Sister Kearney said. Each month, the ministry offers “A Day to Call Your Own/A Retreat to Call Your Own,” where people can spend a day or weekend at the center exploring the grounds and praying as they wish. The ministry also offers a 30-week program on the Spiritual Exercises of St. Ignatius and facilitated retreats centered on meditative or contemplative practice.

The center also sponsors a three-day summer institute each year that includes instruction, as well as opportunities for reflection and worship. This year’s institute focused on St. Benedict.

The center and grounds also are available for parishes and school communities to conduct their own retreats and meetings.

“We are very ecumenical so we have people from all different Christian traditions that come and use our space,” Sister Kearney noted.

In addition to its retreats and programs, Mercy Spirituality Center also has added to its grounds six “creation stations” where visitors can spend time in nature. Visitors can follow a path that starts at the Peace Garden and continue with individual stations devoted to specific elements in nature, such as wind, creatures, light, Earth, water and trees.

The stations were created to help people make a connection between nature and God, Sister Kearney said.

In line with their mission to help people with their spirituality and become more connected with God, Mercy Spirituality Center kicked off its yearlong 40th-anniversary celebration with a two-day community event Aug. 3-4 featuring Shane Claiborne, known for his work with St. Teresa of Calcutta and “The Simple Way” foundation in Philadelphia.

“We thought the kickoff of the 40th anniversary should be some sort of a spiritual and community event that gets people excited, so that is how the idea of Shane Claiborne came about,” said Karen Kosciolek, the center’s executive director, noting that the anniversary celebration will conclude next June with a gala.

As Mercy Spirituality Center looks to the future, Kosciolek and Sister Kearney said one of their focuses is to try to get the word out about the ministry, especially to younger people.

“We offer this quiet space in the city where people can come and they don’t have to have their earbuds in. They are away from the television, they are away from the phone. Silence can be transformative,” Sister Kearney said. “It’s hard to find that (silence) these days.”