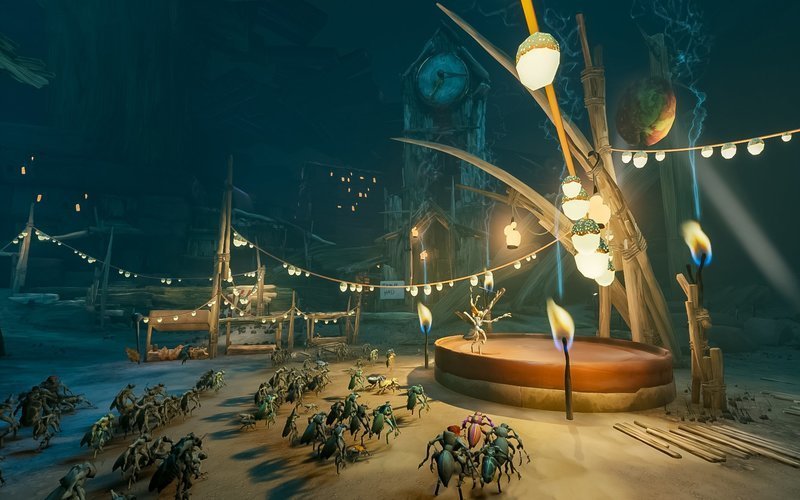 This is a scene from the video game "Metamorphosis." The Catholic News Service classification is A-II -- adults and adolescents. The Entertainment Software Rating Board rating is T -- teens. (CNS photo via All In! Games)

NEW YORK (CNS) — Inspired by the works of Czech author Franz Kafka (1883-1924), “Metamorphosis” (All In! Games) draws players into a surreal world where a young man finds himself transformed into an insect, his friend is put under arrest and he hears a strange voice summoning him to a place known as “the Tower.”

As Kafka fans will recognize, these plot lines are inspired, respectively, by the novella from which “Metamorphosis” takes its title (1915) and the posthumously published novels “The Trial” (1925) and “The Castle” (1926). This fascinating platform puzzle game ties these varied stories together well. But scary images make it unsuitable fare for children.

Gregor (voice of Maciek Nawrocki) wakes up after a night of drinking with his friend Joseph (voice of Sean Palmer) to discover that his world has somehow become entirely different. As Gregor’s perspective shifts, he realizes that he has been changed into a bug, an awareness that dawns on him as his voice gradually becomes a gravelly buzz.

Thinking that Joseph might be able to help, Gregor searches the house — only to find his pal in the custody of two officers who confront him with dubious charges.

In another strange turn of events, Gregor hears the voice of a man who tells him to go to the Tower, where there are others like him — people who have become insects. Reaching the Tower is Gregor’s only chance to find the answers he will need to reclaim his human nature and save Joseph.

Game controls are intuitive as Gregor crawls and jumps across everyday objects with items such as books or cigarettes forming the elaborate platform puzzle. Walls can be climbed if Gregor touches something sticky, like glue or paint.

Environmental artwork is rich and charming. But the animation of the human characters leaves much to be desired.

Gregor encounters other insects during his journey who are full of life and round out his surreal world.

“Metamorphosis” falls short in a few areas. Much of the game feels like a walking simulator and, at two hours, the playtime is brief. The default camera controls can be overly sensitive, making it difficult to focus on particular areas. The English translation of the game, which was originally written in Polish, moreover, contains some spelling and grammatical errors.

Parents should be aware that there are references within the artwork and dialogue to alcohol and tobacco use. And visual and thematic content could prove upsetting for youngsters.

In keeping with Kafka’s style, the game’s ending provides no real resolution, which may leave players feeling unsatisfied and frustrated. Kafka’s outlook on the world was a tragic and depressing one very much at variance with the hopeful message of the Gospel. So gamers tackling “Metamorphosis” will need discernment to work through that discrepancy.