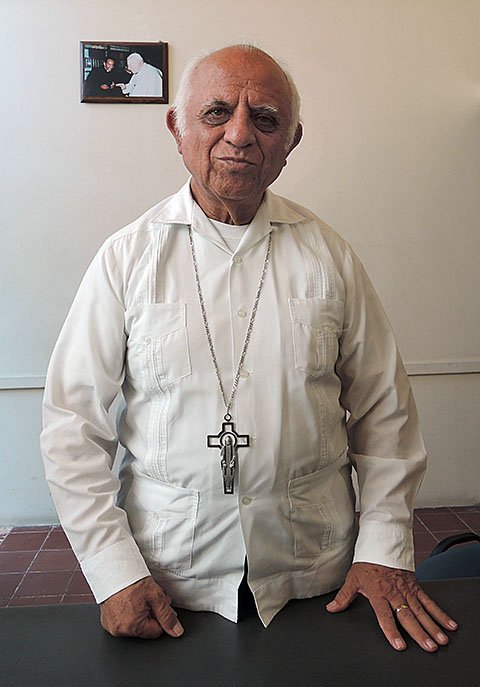 Bishop Miguel Patino Velazquez of Apatzingan, Mexico, poses for a photo in his office after celebrating Mass in Apatzingan Nov. 3. Bishop Patino has ministered for more than three decades in this mountainous region of Mexico's western Michoacan state known as Tierra Caliente, or, "Hot Earth."

APATZINGAN, Mexico (CNS) — Bishop Miguel Patino Velazquez of Apatzingan has ministered for more than three decades in this mountainous region of western Mexico known as "Tierra Caliente," or hot earth.

Early immigrants also called it "hell’s anteroom," for its hot climate. But drug cartels have caused the heat in recent years, carrying out crimes ranging from extortion to kidnap to making methamphetamines and turning Michoacan into "a failed state," according to an open letter penned by Bishop Patino — who also alleges local officials have often acted in cahoots with criminals.

In a follow-up interview with Catholic News Service, Bishop Patino stood by his strong statements, which made national news and cast him as an unlikely anti-crime crusader.

"If you’re an ordinary citizen and someone commits a crime against you, who do you complain to?" the bishop asked.

Father Gregorio Lopez, vicar of the Apatzingan cathedral, said Bishop Patino is "denouncing with names, something no one did before."

"The bishop is prudent, but he’s also brave. He’s a combination of the two things," he said.

Mexican bishops have seldom made such strong statements on security, even as a government crackdown on drug cartels and organized crimes claimed an estimated 70,000 lives over the past seven years.

The bishops’ 2010 pastoral letter made little media impact, and the church has had to explain allegations that cartel kingpins made donations, constructed chapels and consider themselves Catholics, despite dealing drugs and kidnapping and killing innocent people.

But with Pope Francis blasting drug cartels and organized crime — most forcefully during his July trip to Brazil — opportunities may be opening for Mexican bishops to make more critical comments.

"We’ve continually been speaking out … but now, much more forcefully," Bishop Patino said.

Even Michoacan Gov. Fausto Vallejo, who downplayed an Oct. 27 wave of attacks on 18 electrical substations as vandalism, said of the bishop: "He’s right in much of what he says. We have no reason to hide our reality."

Media have moved in on a region the bishop says had been overlooked and, in many cases, covered by reporters either cowed or corrupted by criminals or influenced by protesters — paid off by the cartels, he alleges — who demand the police and army leave Michoacan.

Reporters covered an Oct. 31 pilgrimage for peace and recitation of the rosary, when Bishop Patino revealed that criminals had killed five of his priests over the past 17 years.

"This is the kind of thing that no good man can stay silent on," Bishop Patino said.

Priests say they’ve been increasingly under threat for their support of self-defense groups, which the government alleges are infiltrated by drug cartels. Priests deny that charge. They have shown support for the self-defense groups through simple gestures, such as allowing them to ring church bells to signal gatherings or warn of emergencies.

The priests exchange information regularly and say they have petitioned their bishop to condemn the corruption, drug dealing and crimes like extortion and kidnap that affect ordinary people.

"Our voice isn’t heard sometimes, but his voice has weight," said Father Andres Larios, parish priest in the municipality of Coalcoman. "The letter was edited by many priests, but he signed it."

Bishop Patino’s letter received shows of solidarity from the Mexican bishops’ conference and the Archdioceses of Mexico City and Acapulco, but whether the bishop’s behavior signals a sea change is uncertain.

Auxiliary Bishop Eugenio Lira Rugarcia of Puebla, bishops’ conference secretary-general, said Nov. 11 sees no change in posture, noting that the bishops have been issuing letters on violence in Mexico since 2000.

Bishop Javier Navarro Rodriguez of Zamora, also in Michoacan, told reporters Nov. 11 that all of the state’s bishops delivered a letter on security to interim Gov. Jesus Reyna in May.

"Our fear remains because, once (the federal police) withdraw, all of the (bad guys) would come out of hiding to continue their work. Our communities feel defenseless," said Bishop Navarro, vice president of the Mexican bishops’ conference.

Michoacan unfolds to the west of Mexico City and been at the center of Mexico’s crackdown on crime and drug cartels. Drug dealing there dates back decades, but Bishop Patino said it was more a mom-and-pop operation than big business.

"They used to have small guns … small cars. Now they have bulletproof vehicles," he said.

A cartel known as La Familia Michoacana surged in late 2006, taking control of crime in the state and building a social base.

La Familia subsequently splintered, with a sect known as Knights Templar emerging as the victors. The cartel teaches a homemade religion, complete with its own version of the Bible, authored by La Familia founder Nazario Moreno Gonzalez, better known as "the craziest one."

Moreno was killed in 2010, but shrines have appeared across the region with his image, and people venerate him as "St. Nazario."

"They’ve created their own sect," Bishop Patino said. "They’ve put small chapels in all the hamlets. They inaugurated them with drunken parties."

Bishop Patino’s letter said the regional conflict was driven, in part, by cartels trying to reclaim the municipalities and crime territories lost to self-defense groups by preventing the delivery of basic supplies such as food and gasoline.

"In these municipalities, members of organized crime were expelled, which ended the (illegal) payments, extortions, abductions, kidnappings and rapes," Bishop Patino wrote.

Father Larios was among the priests helping the self-defense groups. He fled the diocese for a month earlier in the year after being threatened by criminals for his support of a self-defense group in the town of La Ruana and denouncing the extortion attempts on lemon growers and packers. Those actions threw desperately poor pickers out of work, he said.

Criminals told him, "You shouldn’t be with them, Padre," Father Larios recalled.

By ringing the church bell, they said, "You’re with them and they’re our enemies."

Father Larios said priests have been harassed and threatened since Bishop Patino published his open letter. Father Lopez said the bishop was threatened by armed men appearing at the cathedral.

Bishop Patino appeared unfazed and promised to continue ministering to all parts of his diocese, despite the dangers.

"It’s worth the effort to people coming to the church at this difficult time," he said.